King of Defense: Battle Frontier is a strategy for android, which feature is the ability to combine different types of towers. In the story, monsters invade the state borders and you have to join heroes who defend the kingdom from foreign invaders. To do this, you have at least four types of towers: warriors, archers, magicians and bombs. Moreover, you can connect two towers in one place, which adds space for tactics. In addition to towers, there are still heroes with a number of special skills and magic spells. Strengthen towers by pumping them during the game to increase power and range. Apply all this together to cope with increasing waves at each of campaign levels. The project offers cute graphics in a hand-drawn style, variety of terrain landscapes, combination of two towers into one, as well as all kinds of monsters from flying to difficult bosses with special skills. Also download King of Defense 2: Epic Tower Defense and EVE Echoes.

Find out as much information about the game as you can by reading our review.

Various enemies are ready to destroy you

King of Defense: Battle Frontier allows players to fight off invasion of monsters. They go in waves and you always have a timer, where you can track the time to the next pack of enemies. It is necessary to erect towers to slow down their progress, but we must remember that there is a shortage of space. 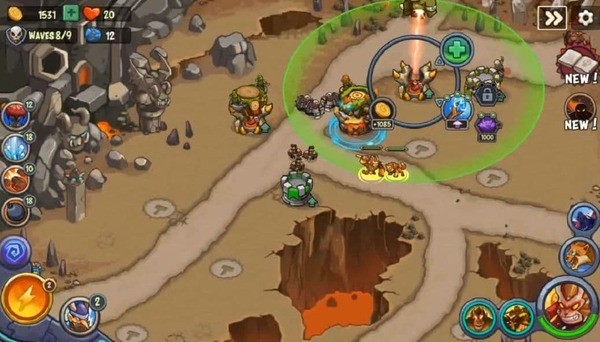 In total, players can meet several types of enemies:

Naturally, players have to deal with bosses from time to time. These are serious opponents, capable of destroying several units of elite infantry at once with one wave of the hand. In this regard, it is necessary to adjust your line of defense for this enemy so that the boss could receive tons of damage from the towers all the way. The rewards for them are truly royal. Therefore, you can quite calmly improve several towers to the maximum level at once by killing such an enemy. This action buys time for regrouping or building a second line of defense.

Summon a hero to help

Perhaps the main advantage of King of Defense: Battle Frontier is the appearance of heroes. In story mode, player always has especially powerful unit under his control, who is able to move indefinitely along all the flanks. This is the hero and players have opportunity to choose his profession. He can become a warrior, magician or archer, as set of his skills depends on this. 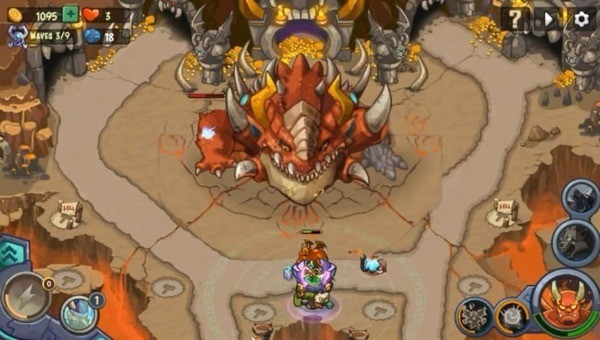 Main hero is rather weak at the very beginning, as he does not have the strength to fight whole waves of enemies. It is worth building barracks so that the soldiers can remove the focus from him and cover his back while retreating. As you progress through the levels, the hero gradually discovers new abilities that make him a real killer who can cut out whole waves of monsters.

It is advisable to build as many towers as possible. However, their total number, as well as funds are limited, so think carefully about which buildings are most effective against a particular enemy. Thanks to a simple and user-friendly interface, as well as useful training, everyone can quickly figure out the process. Passing one level usually does not take much time, but there are quite difficult stages where you have to work hard.

The graphics in King of Defense: Battle Frontier have a cartoon style, very bright and high quality. The matching music creates an amazing magical atmosphere.

For speedy upgrading of your towers and improving your superpowers, we suggest using King Of Defense: Battle Frontier Mod APK for unlimited amount of money.

King of Defense: Battle Frontier is an exciting strategy game from Ironhide Game Studio that will definitely appeal to all fans of this genre. Epic battles await you, where you have to defend your own fortress. Command a squad of your own heroes and use your skills to defeat an army of bloodthirsty monsters! Replenish the ranks of your own troops by training recruits. Feel like a real commander, engaged in defense of his own medieval kingdom. It is necessary to use all available weapons, thinking over the strategy in advance. The main thing is to protect the castle, preventing enemy troops from approaching its walls. 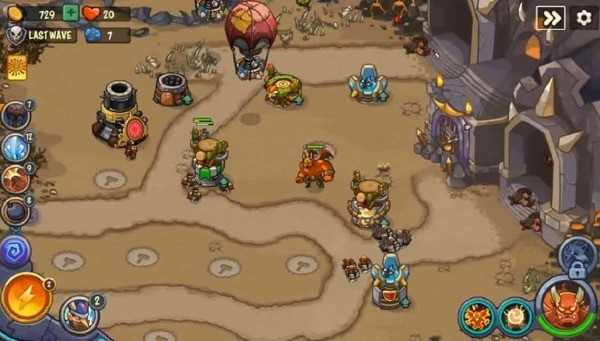 Enemies in King of Defense: Battle Frontier are different. Usually goblins or other similar creatures with certain characteristics. They differ in speed of movement, amount of health and some have special skills. Destroy monsters of the light type with one blow, but they move quite quickly, usually an archer tower is enough to eliminate them. Heavy monsters, move slowly, but their armor is strong and they can easily destroy the infantry, so you have to choose something more powerful. A special type of enemy is the most dangerous, because they have special skills and can even become invisible to some buildings. Do not worry, at first you will have to face only light enemies.

In addition, the user has an interesting opportunity to connect turrets and make them more powerful for some enemies, but more vulnerable to others. There are many possibilities for variations, so you should make the right choice.

Is it worth wasting time on this project? Yes, if you are not ready to dive too deeply into serious games of the same genre. King of Defense: Battle Frontier offers you a moderately difficult, fairly long and exciting journey, which is worth going through.