Kingdom Clash – Battle Sim is an addicting strategy and clicker game from the renowned developer CASUAL AZUR GAMES. You have to take part in epic battles, where several dozen fighters will fight on both sides of the barricades. Send several squads of archers, gladiators, ordinary spearmen, magicians and many others to the battle. Connect and combine squads to make them stronger. Summon a brave hero for help, who will not only coordinate the actions of your fighters, but also personally take part in the fight, using his special skill. Conquer new territories and become a brave commander. Fight great bosses and try to destroy them all. For this, you have to use a wide variety of tactics and strategies. If you are fascinated by similar projects, then download also Clash Mini and Modern Age 2.

Kingdom Clash – Battle Sim only recently appeared on the Play Market, but immediately fell in love with users who leave only positive reviews to the game. 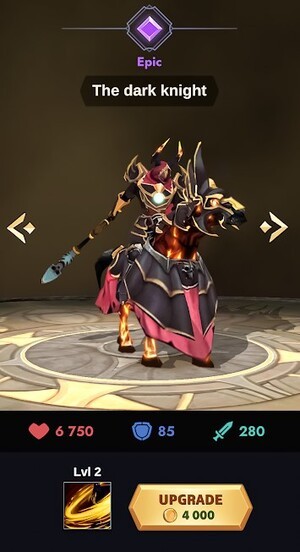 Think over the best tactics for the battle

So, since Kingdom Clash – Battle Sim is a strategy game, tactics are extremely important here. To begin with, you have at your disposal various units that you have to place on the playing field. That is, it is better to put archers backward and heavy infantrymen forward. In addition, combine units of warriors to make them stronger. Do not forget that different locations may have different landscapes. This also greatly affects the gameplay and the outcome of the battle. Keep track of how many warriors you and your opponent have in order to make the most of your own forces.

Bosses can bring you some problems, since often a limited number of troops can kill them. At later stages, the bosses will be behind various defensive structures, so you still need to get to them. The nice thing is that the leaders here are much larger than their retinue, so it is enough to just surround the enemy and shoot at him with archers and other long-range units.

42 types of warriors are available for research in Kingdom Clash – Battle Sim! Among them are bombers, paladins, archers, mages, gladiators, monks and many others. Initially, only a couple of classes are available to you, but you can unlock them all in the course of hundreds of levels! Pump the level of your units and skillfully combine them on the battlefield to get the maximum result. Warriors are ready to fight for you and your land. You just need to give the right orders. 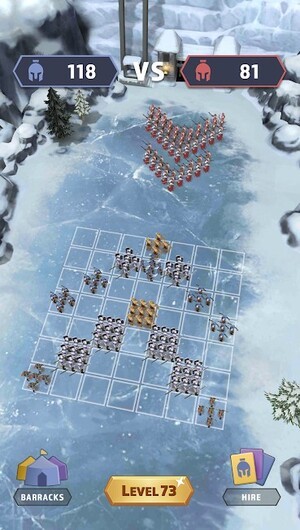 Enlist the support of epic heroes

Among other things, there are heroes in Kingdom Clash – Battle Sim. They play the role of generals, but at the same time, they themselves fight during battles. Heroes become available at level 20. There are 47 of them in total. Each hero owns various weapons, and they have special skills – powerful skills that can be used during battles and destroy everyone around. For example, a gladiator makes a slashing blow with his huge sword, during which he inflicts damage on everyone in his path. Of the minuses – the heroes are quite slow and run for a long time into the thick of events. Therefore, it is more profitable to take the characters of archers into battle. It is also necessary to upgrade heroes to increase their power.

Kingdom Clash – Battle Sim is a top-down application with rather primitive graphics. Considering the huge number of troops present in the project, we want to mention good detail and animation of units. There is also warlike music that spurs the user and drives him forward.

So that you have the opportunity to improve units and heroes, we suggest downloading a mod that will give you unlimited amount of diamonds and gold.

Kingdom Clash – Battle Sim is a fun modern project. You will be thinking about different strategies, trying to achieve incredible performance, using numerous tools. All events take place in a fantasy world filled with brave heroes. Each of them has a unique character, which helps to better navigate when performing actions of a different nature. You will immediately plunge headlong into an indescribable atmosphere, which will make you feel the maximum of emotions. You need to form a development strategy to kill all enemies. Each ward has its own set of unique characteristics that make it possible to cope with all difficulties. You should pump them more often. Combine them with each other, trying to achieve the perfect result. If you develop development tactics correctly, you will get to your goal faster. It is important to orient yourself as correctly and accurately as possible in the process, then there will be less confusion in what is happening. You need to try to repel attacks as efficiently as possible and then you can feel like a successful ruler.

Kingdom Clash – Battle Sim will appeal to anyone who wants to practice passing strategies. There are many cool moments waiting for you where you can prove yourself. Do not forget to improve your army, because without this it will be difficult to achieve something.