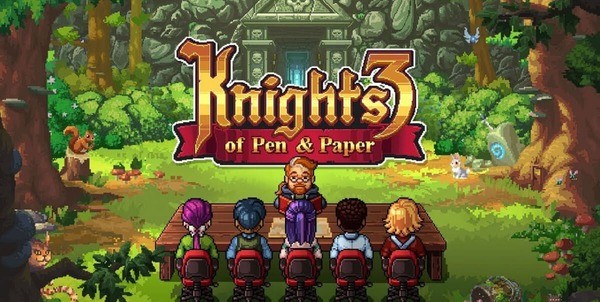 Knights of Pen and Paper 3 is an RPG from the developers of Paradox Interactive. This project is a parody of the famous RPG applications. The game has a lot of different references, as well as humor. Exploring different corners of the continent, you will come across hostile creatures. Defeat them in turn-based battles, using the special abilities of each of the group members. Make a team that includes warriors of different classes, which will effectively complement each other. If the battles with artificial intelligence do not seem so difficult to you, then check yourself in the RUR mode, where you will definitely find yourself a worthy opponent. Any fight brings rewards, which allows you to pump the level of fighters and equip them with new weapons, helmets, rings, shields and other items that make your wards much stronger. If you are interested in this genre, then download Warhammer: Odyssey.

Knights of Pen and Paper 3 is another part of the famous series. The project in question turned out to be even more interesting than the previous ones. Find out details below.

Players and the host gather at the same Knights of Pen and Paper 3 table. He is a dungeon master. He tells a story, helps in difficult situations with advice and judges if any dispute arises. In general, the main one among all. You need to create several unique characters to play out. These are powerful warriors, insidious wizards, and deadly ninjas and so on. You have to choose from three races, thirteen classes and many skills that will form the characteristics, active and passive skills of your heroes. Embark on your first adventure after creating the characters.

Fights in Knights of Pen and Paper 3 take place in turn-based mode, where we use skills, drink potions, defend ourselves, run away, or just attack. While at the location, you can look at the items in the inventory, attack mobs, sleep in the camp, replenishing health and mana points, view the available tasks, go into the settings and open the world map.

In villages, you can buy food, potions and accessories that improve the parameters of characters. There is a blacksmith in large cities, which improves the characters’ weapons and armor. Visit a tavern where you can leave the characters, thereby freeing up space at the table for new ones or reset skills to reconfigure. It is also possible to decorate a room from the “real” by purchasing a new table, carpet, door, refrigerator, clock, bookshelf, wall, Holy Grail, dragon and even a new master. Well, do not forget snacks and drinks. All this affects various game parameters one way or another.

Fight a variety of monsters

Going through the main and side missions of Knights of Pen and Paper 3, the squad visits new places, gains levels and fights against a variety of enemies. There are plenty of different rivals in the game from humanoids and animals to living objects and broken pixels. All of them differ not only in appearance and level, but also in abilities.

Someone has resistance to magic damage, someone to physical damage. Others get more painful from divine damage, many send various debuffs or simply can heal, and some can even summon smaller monsters in the midst of a battle. There may be a situation where your team easily deals with a group of stronger mobs without special skills and dies from those that send especially unpleasant debuffs, preventing you from attacking normally.

The first thing that meets us is pixel graphics. Quite specific, considering the pixel size, but detailed at the same time as much as possible. The animation may be sparse, but the quality of the local landscapes pleases. Villages, cities, castles, temples, forests, swamps, jungles, beaches, caves – there are little references almost everywhere. In addition, simple uncomplicated music sounds during the adventure.

To make it easier for you to complete the tasks of Knights of Pen and Paper 3, we offer a mod that can give your heroes an unlimited amount of mana. Now you can use your mana and not worry about it running out.

In addition to the main plot tasks, there are a considerable number of random side quests, which makes the gameplay more fun. Welcome to the next installment that will delight fans of the genre with endless adventures, sometimes-absurd missions, battles against awkward bosses and numerous jokes.

The Master guides you through the parody story of formation of heroes and their struggle with the great evil. Your brave knights of pen and paper escape from prison, become heroes of villages first and then kingdoms. Help them to collect vegetables for grandmothers and shamans from temples, destroy populations of monsters and bandits, save kings and princesses. Of course, the heroes will fight the great Evil, protecting the world of pen and paper.

You receive gold and items for completing the tasks of Knights of Pen and Paper 3. Sell items in stores. Already at the beginning, you learn simple and convenient crafting system where you can create equipment and enchant items. The further the player goes through the story, the more crafting possibilities.

Separately, it is worth mentioning the dungeons. This is a set of rooms linked into one labyrinth. Each new room can bring treasures, traps, and the next battle. If in a normal location you can take a break and recover, then there is no such possibility in the dungeons. As a rule, these dungeons are the lair of the next boss who still hides somewhere. All this happens with funny dialogues between the characters and the dungeon master.

Knights of Pen and Paper 3 is a kind of game that does not try to be something epic, but is a kind of parody of modern RPGs. Here you can immerse yourself in funny worlds full of adventures, dangerous monsters and ancient treasures. The game is not a masterpiece, but leaves a very pleasant aftertaste.

How to Install Knights of Pen and Paper 3 Mod?