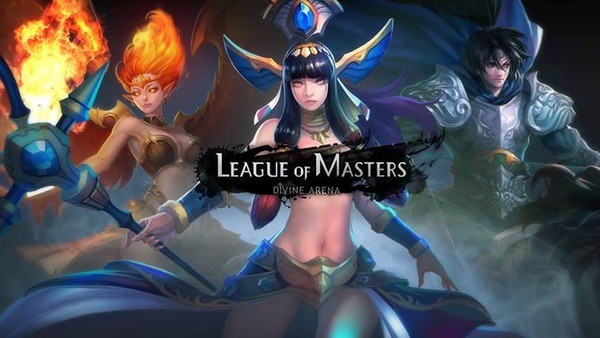 Now, owners of Android devices can download a variety of strategies and arcade games in PvP genre. Recently, such games have become popular and their number in Play Store continues to grow. League of Masters: Legend PvP MOBA Summon Champion has become a real boon for fans of stylized graphics and dynamic battles in MOBA genre. Get an opportunity to fight in arena online with real players, as well as try classic gameplay focused on completing quests, passing levels and participating in tasks. Several arcade action modes make the game varied and interesting. Pay attention to other strategies – Mini DayZ 2 and Dungeon of the Endless: Apogee.

League of Masters: Legend PvP MOBA Summon Champion from Lunosoft was released not so long ago, but managed to interest fans of the genre. More than five million Play Store users have installed the game, but its rating remains controversial – 3.8 points.

League of Masters allows you to try out a variety of heroes in the battle. There is a Champions tab in main menu with more than 21 heroes presented. Initially, you have a choice between three available heroes: Zhao Yun, Houyi and Selene. Before decision making, you can familiarize yourself with detailed hero characteristics: health, strength and combat skills. In addition to characteristics in the main menu, special skills of every hero are available. Just make a tap to find out additional information. For example, percentage of critical strike, diameter of spread and power of the attack.

Main character menu includes inventory for weapons, armor, magic decorations and additional clothing. You can get equipment by completing levels in single-player adventure mode, as well as in multiplayer arena. In addition, equipment is available as a reward for special missions in the game.

Several modes are available at once in League of Masters: Quick Match, Adventure Mode, Dungeon and Colosseum. Quick Match mode provides players with access to arena or battle with bots on a chosen map. Just spend 3 units of energy for Quick Match. Adventure Mode is a single player game that includes a story mode. After spending 5 units of energy, you can start defeating monsters with a team of three available characters. There are two modes of different difficulty available in the dungeon: a treasury with coins and gems. However, in order to complete Dungeon mode, you will need a high rank. By entering Colosseum, players can fight other characters in a battle, as well as gain experience and reputation points.

League of Masters has stylized graphics. Main menu greets players with colorful graphics and visualizing each mode. The main characters of the game have a form of cards. During the battle, selected characters appear as 3D figures that move with ease across the battlefield. Each attack is detailed allowing players to see the crushing blow and defeat of the enemy.

Heroic music plays against gameplay background, setting up players for battle. It is also possible to hear certain sounds when the heroes attack. During the battle, music changes to a quieter one, allowing you to think over the game strategy.

The game provides players with four turns to attack one of the monsters, which takes a lot of time and energy of characters. Therefore, we give you an opportunity to install League of Masters: Legend PvP MOBA Summon Champion with a built-in mod that allows killing enemies with one hit.

By installing League of Masters mod, you will be able to quickly deal with their enemies, killing them immediately. Please note that the mod only works in single player modes. It does not function in PvP. Therefore, do not forget to turn it off when playing in multiplayer. You can do it through the mod menu by activating the desired mode.

Several functions are available to players in main game menu. Characters section allows you to select an active hero. Objectives describe the main game missions. In addition, you can visit Inventory, Shop and Daily game tabs.

After choosing the current character, you also must choose one of the four modes presented. For a start, the easiest way is to choose Adventure Mode, where you can understand how to control the character. Moreover, there you can get good equipment for playing in the arena. In addition to the main battle, you can complete quests and earn good rewards in form of equipment, weapons and new level.

The controls in League of Masters are quite simple. There is a joystick on the left for moving the character around the battlefield and various skills for battle on the right. Each character has own skills, which you can find in Heroes section. For some modes, it is possible to use automated attacks that allow you to earn more experience easily without intervention. However, this option does not apply to online modes.

Action game League of Masters: Legend PvP MOBA Summon Champion allows players to feel like a real part of the magical world and fight with a variety of monsters. Try out new characters, provide them with good equipment and enjoy real battles online.

How to install League of Masters Mod APK?

Don’t forget to delete original League of Masters before installing our modified version to prevent errors during installation process.