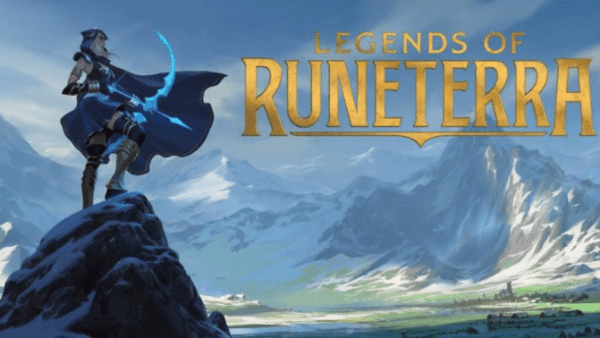 Legends of Runeterra by Riot Games is a modern, well-designed collectible card game similar to Hearthstone. Collect as many cards and decks as possible, raise your rating, and make your way to the top league. Since the game comes down to the LoL setting, most of the characters are from this game. Each of them has special skills, as well as an awakening condition. The combat mechanics are closer to The Elder Scrolls: Legends than Hearthstone, so it can be difficult for a beginner to adapt. However, the game has good tutorials. The key feature of the game is the champions from League of Legends. Each of them has unique skills and interesting combos, around which you can even build a whole deck. Throw in your own animations for these cards and you have a very bright, memorable and addicting card game. For fans of card games, we recommend checking out Pirates Outlaws. If you like large-scale battles online, then install Score! Match.

Legends of Runeterra has become very popular with players from all over the world. Learn more about the game from our review

Build the best deck to beat everyone

From the very first minutes, Legends of Runeterra makes it clear that the right decks decide everything here. The training includes three battles against artificial intelligence. You need a new deck collected automatically to use in each new battle. One of them is balanced in terms of Attack/Defense, the second suggests using spiders – weak cards, which, nevertheless, can multiply, taking in their number. The last one can’t live without magic – the third selection is built on spells. 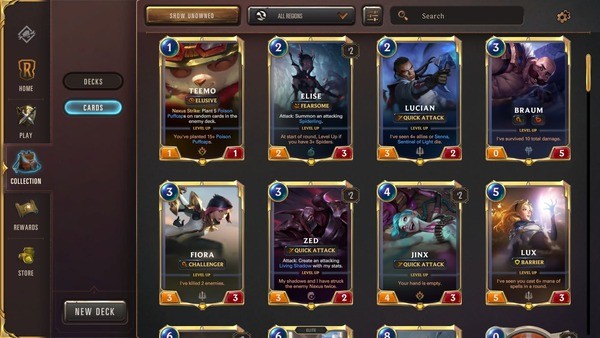 In order to win battles in Legends of Runeterra , you must destroy the opponent’s stone that has a certain number of health points. Just take cards from the deck and in those moments when the attack token is on your side, put them on the playing field. The gameplay in Legends of Runeterra has such design that the player has opportunities for different tactics. Someone takes by the number of cards, exposing many cards with a small number of attack and defense points. It is difficult to block them all, and at least one can carry out an attack on the target. Someone is trying to concentrate power in one or two cards, delivering powerful blows and breaking through the defense. The competent use of spells that strengthen your fighters and destroy the opponent’s cards is also a very important factor.

The economy model in Legends of Runeterra is quite interesting. It differs from those that the gamer could already see in the same Hearthstone or MTG: Arena. Here you don’t buy packs with maps, instead, users are invited to participate in battles. Get experience points for each battle, . Having accumulated a sufficient number of them, you receive a chest, a crazy card or shards. You can spend them on creating the creatures or spells you need. The reward varies depending on which region you prefer. 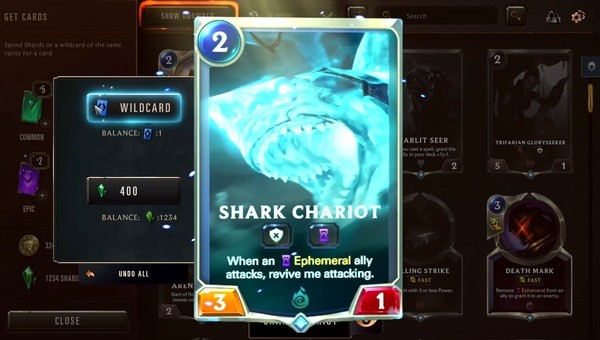 Thus, the developers of Legends of Runeterra managed to solve the problem of the total dominance of donators in online battles. You can simply participate in battles on a regular basis to get new cards.

Fight other players in an exciting multiplayer mode

The gameplay of Legends of Runeterra comde down to one-on-one duels between decks of players. All decks contain forty cards. Each is the personification of a specific champion, skill, or magic spell. The ladder in the game is constantly changing, as is the Meta, so that even a beginner can break into the leaders relatively quickly. The game has a rating system – if you win several victories in a row, you improve your rating and fight with stronger opponents and vice versa. Moreover, there is a relatively fair system of selection of opponents. In ladder, you can rely on the fact that the game itself won’t choose obviously stronger opponents against you just to bring down your win streak. If you are a beginner and not yet ready to go online, then try your hand at combat with AI.

Legends of Runeterra features high-quality 3D graphics at the level of PC games. Animation, elaboration of maps, visual effects – it all looks beautiful. In addition, the game has high-quality sound and funny music – you won’t get bored. 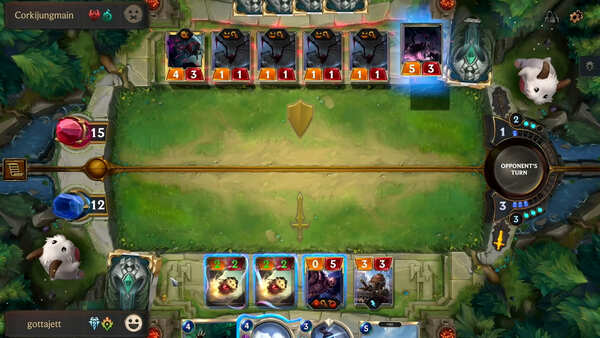 In order to upgrade and improve your deck, as well as participate in various Legends of Runeterra events, you need money. You can obtain them using a long grind or donation, or you can download a mod for unlimited money and enjoy the unlocked gameplay.

According to the results of the test, the unlimited money mod turned out to be workable. It is safe for your gadget – we checked installation by antivirus programs before playing.

Legends of Runeterra combines fast-paced matches (divided into rounds) and strategy. When choosing a deck, be sure to take into account the compatibility of cards and their properties. Successfully collected, they give bonuses. In turn, thanks to the latter, you can turn the tide of the match.

As we already said, your main goal in battle is to break the stone of the enemy, using your cards, as well as spells for this. Each card has attack and defense indicators. The opponent must then present his cards to block this attack. 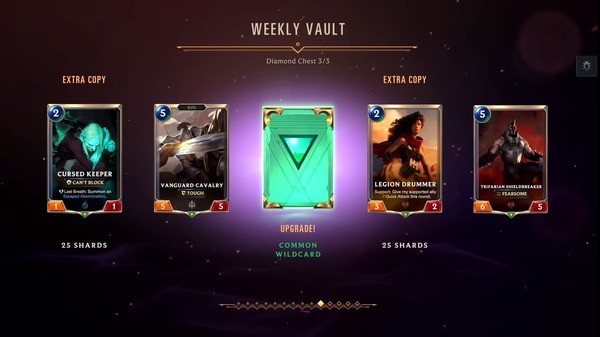 There is a simple rule in Legends of Runeterra: you need to put the blocking card exactly opposite the attacker. If he does not have enough cards at that time to block all attackers, then the blow goes directly to the base, bringing you closer to victory. Such a blow can take place even if the opponent has put up a defender, but his defense index is less than the attacking potential of the attacker. In this case, the “extra” attack points reduce the health of the enemy stone.

Experimenting in Legends of Runeterra is encouraged. The gamer can collect and combine cards as he wishes. Everything in order to form something really unique and unrepeatable. The user gets the opportunity to show creativity: the deck must be strong, and the taken moves are exceptionally correct. It is also important to know how to bluff in order to outplay your opponent.

Legends of Runeterra appeal to both fans of card games and ordinary users who are looking for a game for several evenings. It does not take a lot of time, and thanks to the very detailed training, you can quickly get involved in the gameplay. As soon as you go through the first expedition, you can understand how many cards there are in the game. They all have different interesting effects.

How to Install Legends of Runeterra Mod?

Don’t forget to delete the original version of Legends of Runeterra before installing our modified version to prevent errors during installation process.