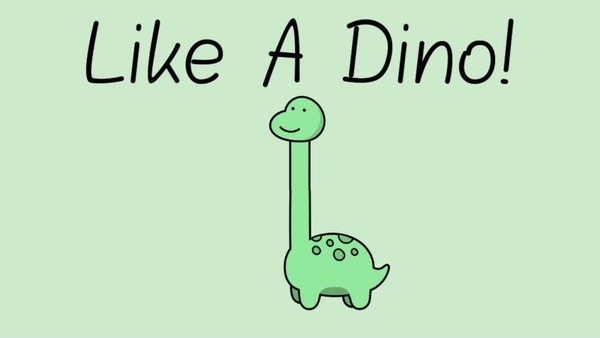 Like A Dino! is a simple but very addicting game for children from the section of the casual genre and Tamagotchi. Young users of android devices can try themselves in the role of a caring owner of a small dinosaur and do everything so that the character grows, develops and does not need anything. Get various bonuses for the animal, helping it to grow. The main and paramount task of the player is to increase the length of the dinosaur’s neck, as this is a kind of indicator of success and game progress. It allows you to set different records and much more. Fragments descend on the screen from above, and if you catch them, the hero’s neck becomes even longer. You can do it easily if the player has a good reaction. You have to move to the right and left quickly. So that the player does not get bored, the forms descend faster and faster. Do not forget to also download Rodeo Stampede and PAW Patrol Rescue World.

Like A Dino! got the love of gamers of all ages thanks to its simple gameplay. The game has already more than 10 million downloads, and this number is constantly growing.

Extremely simple gameplay that even a child can figure out

Developers of Like A Dino! decided not to come up with anything very original, but went along the path of the concept: “The simpler, the better”. We can say that this solution worked, because the project is very popular. In the center of the story is a small dinosaur with a long neck. Moreover, the player will be able to make the neck even longer.

This dinosaur is very fond of music. Therefore, he will happily catch notes falling from the sky and making beautiful sounds when someone catches them. However, looking at the heavens is not very convenient, so the player has to help his ward by running in different directions of the screen. Your hero has multiple lives, but the margin for error is limited. If you lose too many times, you have to start over. By the way, the application has no age restrictions, so even a small child can handle it. If you are looking for a suitable game for a young gamer, then take a closer look at this project.

All the action in Like A Dino! features the music. All compositions here are performed on the piano. The song list includes well-known hits and less popular ones. In general, the music in the game rather plays the role of a pleasant background. When the dinosaur catches the next note, you will definitely hear it. In total, the application contains several dozen musical compositions. Some of them are initially unavailable and are unlocked for coins or upon reaching a certain number of points. By the way, you can add author’s tracks to the game if the presented music library is not enough for you.

Funny skins for the hero

Like A Dino! allows choosing one of the dinosaur skins for himself. You can play as either a boy or a girl. Depending on the choice of the protagonist, the ward can be green, blue or pink. In addition, the application has an in-game store where you can customize the character as you like and add various elements to it. For all this, you need to pay in-game currency. 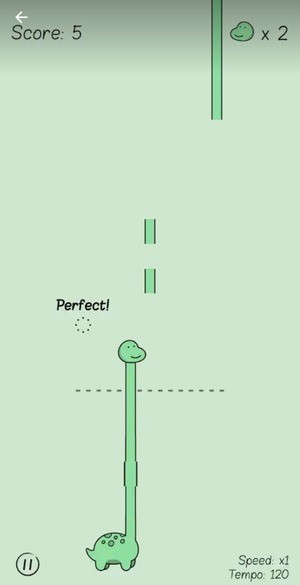 Like A Dino! meets the user with extremely simple and uncomplicated graphics. The screen only shows your dinosaurs, as well as notes falling on it from above. However, the project has very sweet and kind music that perfectly relaxes and immerses the player in this magical world.

To unlock all songs, player needs an in-game currency. It takes a very long time to save up, as you need to go through the same levels repeatedly and watch ads. However, you can get rid of this inconvenience by downloading a mod for unlimited amount of money. In addition, all skins are open in the presented mod for Like A Dino! Therefore, you will be able to choose any hero from the first minutes of the adventure.

At the first stage, everything looks smooth – it is enough to score 500 points for the passage. Do it in five minutes of playing time. Even if the player does not have time in all directions, there is a margin for error. A dinosaur only has five lives, but that is enough. At the fifth level, the difficulty increases significantly. The figures descend closer to the edge. Thus, the dinosaur should not only move to the left, right, but also look so that the figure is directly above the head. The longest parts are the easiest to assemble, just stand still. You can rest a little at this stage.

When it comes to short elements, it is worth getting used to the animation. Capturing a figurine in Like A Dino! happens pretty quickly. This means that you can take an object and immediately rush for the next one. Small complications are also associated with the speed of the fall. When you need to score a large number of points in the game, you have to catch objects for 10 minutes, while mistakes are inevitable.

In general, the application has interesting structure that allows you to set records at certain levels. Therefore, you can show the results to your friends so that they try to complete the level faster.

Like A Dino! is a very sweet and kind game, without any element of violence or evil. If you want to relax and listen to pleasant music, then this project will definitely suit you. Call the children and play with the whole family. Try to beat your friends’ records and go through as many levels as possible, while unlocking all the heroes.