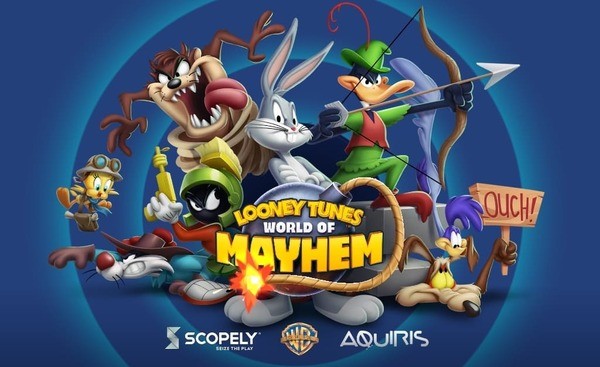 Looney Tunes World of Mayhem is a striking, cartoon-style RPG. The main characters of this game are cartoon characters from Looney Tunes. You will meet Bugs Bunny the rabbit, Marvin the alien, Duffy Duck the drake and other heroes of the popular Warner Brothers cartoon saga. Here you need to collect a self-defense squad, led by a rabbit and fight back the villains. An evil alien warrior wants to destroy everyone, and when not a single earthling remains on the planet and then nothing can interfere with his plans. However, the brave and strong rabbit Bugs Bunny and his comrades will not sit idly by! Welcome to a world of utter chaos. Excellent graphics and carefully thought-out gameplay will entertain every user. If you are interested in role-playing games, then download also Dungeon Survival 2: Legend of the Colossus and Champions of Avan.

Check out our review to learn about all the features of the application in question.

Looney Tunes World of Mayhem invites you to help Bugs Bunny build a strong team of only four heroes. Team members will help each other to prevail in the upcoming insane battles. Get your collection of well-known heroes: Road Runner, Sylvester the Cat, Duffy Duck, Tweety, Taz, and many other heroes with which you can move further and further in this game world. 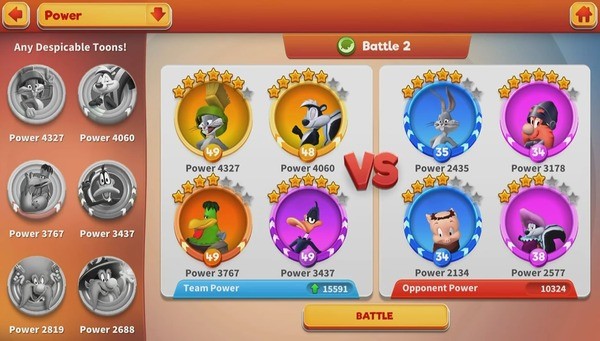 Having assembled a team of four heroes, you have to go through many different battles along the storyline or in battles with users from all over the world. Good interaction of all team members is important here.

The most famous and beloved character in this universe is Bugs Bunny the rabbit. He meets the player at the beginning of the game. The starting point is as follows. The alien has come to the forest and is conducting experiments there. Bugs Bunny, crawling underground, got a little lost and decided to ask the direction of this green creature. In response, he decided to shoot the rabbit with a blaster, destroying his card. The hero mistook this for a declaration of war – this is how the player’s first battle begins! It looks very simple in Looney Tunes World of Mayhem. The opponents take turns exchanging blows and this continues until someone runs out of lives. At the beginning, we only have two types of hits: normal and super, which takes time to recharge. Over time, the number of skills increases, as does the number of characters that you can add to the team.

Separately, it is necessary to tell about how the battle is going. You meet with another squad on the playing field. The battle itself is turn-based. When attacking, you can choose an action for the hero using the buttons that appear. The player’s task is not only to choose the type of blow, but also the enemy you want to attack.

It is hard to imagine a modern game without an online mode. Looney Tunes World of Mayhem also has it. Naturally, it also consists of battles between teams of players held in absentia. The authors managed to come up with something original to diversify their game by changing this mechanics. 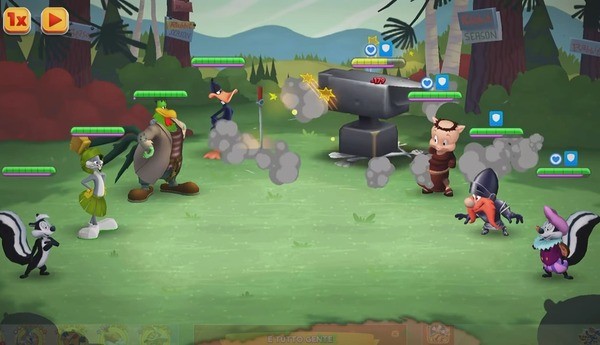 For victories in fights, you get chests that take time to open. For this period, chest goes to the bank, while the team has to to guard it – you can choose the characters you need. At the same time, the protection does not take time – you can use the heroes in other fights and in the campaign. Security is needed just for the implementation of the online mode. If another user enters it and chooses to theft box from several options, then he has to fight with the security. This is the essence of multiplayer – players steal boxes from each other, fighting for them with each other’s teams.

The developers of Looney Tunes World of Mayhem please with well-designed graphics of characters and funny animation. This is especially evident when using special skills in cartoon characters. Characters differ from each other not only externally, their skills and specialization are different. You will also hear the familiar lines of the heroes, as well as pleasant music.

We bring to your attention a mod for No Skill CD, which allows the heroes to perform special skills without recharging.

Looney Tunes World of Mayhem may reward you with coins, dynamite, and additional currency to purchase dynamite from the League store. Use dynamite to pump power-ups for your characters. With its help, you can open the heroes both new abilities – passive and active and improve existing ones, increasing their effect. Active skills focus on dealing damage. For example, Bugs Bunny can dig a tunnel right behind the opponent’s back and stun him with a hammer, after which he will miss a turn. He is also able to collect a huge gift filled with dynamite for opponents – it explodes, causing damage to everyone around. 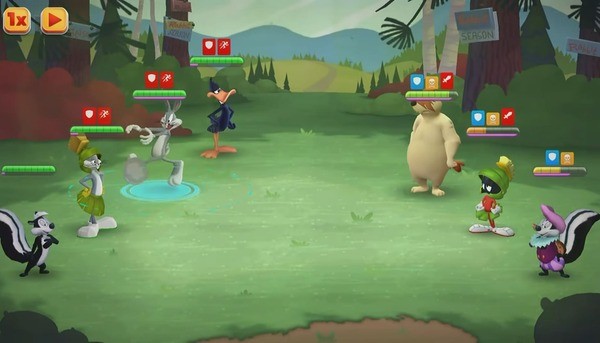 There are also characters that affect allies. Sylvester the Younger is able to heal partners and increase their attacking abilities. In addition, the abilities of the heroes depend on their relationship. If the elder Sylvester is on the field at the same time as the Younger, the latter will receive an additional plus to the damage. A similar effect occurs when the attacking hero hates his opponent. All of these relationships focus on the cartoons in this series.

In between battles, you can go to the Crazy World of Looney Tunes, where you can send your heroes on missions. To do this, you must first return each of them to its location, and then improve them, opening access to new missions. Completing tasks takes time and gives good rewards.

To open new characters, you need to find a special substance that is stored in flasks. Looney Tunes World of Mayhem store allows you to exchange it for several random character pieces. To unlock, you need to find at least ten of them – after finding them, you can activate the hero and add him to your team.

Looney Tunes World of Mayhem is a real find for children, teenagers and those gamers who miss their favorite characters. For everyone else, the project can offer a well-thought-out system of roles and a turn-based combat system, abundance of tactical possibilities and a huge list of options for customization.

How to Install Looney Tunes World of Mayhem Mod?