Lumbercraft is a 3D arcade game from developers of VOODOO. Here you play the role of a woodcutter who needs to recreate his small village. There are many trees around your settlement. Send your hero to chop them down and get material for construction of various objects. First, you build your own dwelling, then build sawmill to get wood. Over time, it is possible to construct store, forge, hospital and so on. Each building has options for making improvements. In addition, there is a portal allows you to move outside your city. There, players need to survive by killing enemies that attack in waves. Build towers, defenses and other things to repel enemy attacks to defend yourself. Make your city powerful and upgrade your hero to the maximum. If you are fan of games from VOODOO, then download also Fail Run and Woodturning.

VOODOO developers have already released a dozen interesting games and Lumbercraft is no exception. Read our description to find out the main project features.

Your character in Lumbercraft has two resources – coins and logs. At the very beginning, you need to collect a certain amount of logs in order to build sawmill. It generates trees automatically, so you don’t need to walk and cut trees. Then you can proceed to building a store. Here you can exchange trees for coins. Next, build a forge to improve your character and a hospital where you can restore the amount of your vitality. There is also a general level of the city. You need many logs to raise it. 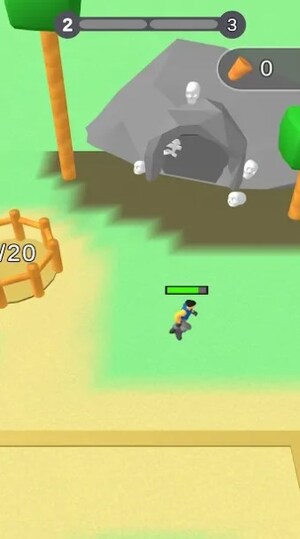 After you develop your base in Lumbercraft, you get the opportunity to go in search of adventures in special dungeons. Its essence is as follows. You need to survive several waves of enemies and earn gold coins in case of success. You can kill enemies with your ax, but you can go further and build defense towers at the location. Place a cannon or a live archer on the tower. They fire on rivals, but you need to stand in a delineated circle – turret’s engagement zone. After killing all enemies, you receive money. Then you can either return to your base or go to the next dungeon. Don’t forget that building defense towers also requires wood, so make sure you stock up logs ahead of time.

Your lumberjack has a certain number of lives, as well as an ax. Initially, character has the worst ax, which is suitable only for timber extraction, but practically useless in battles with enemies. That is why you need to improve your hero in the forge to fix this unfortunate situation. There you can arm yourself with more serious weapons, as well as get a shield. In addition, it is possible to increase amount of hero’s vital energy. If you got a wound in battle, then rather return to the base and receive appropriate treatment in the hospital. All improvements cost money and logs, so try not to forget about sawmill and, if necessary, exchange resources in the hospital. 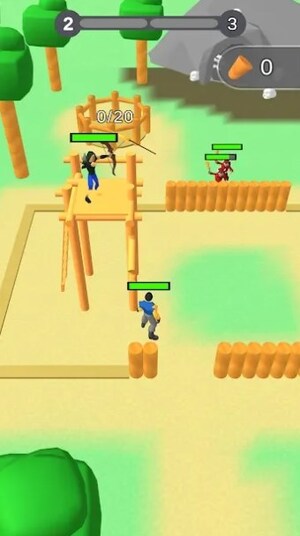 Lumbercraft features 3D graphics that does not stand out from competition. Although all VOODOO games look about the same (if you are already familiar with other studio works), it would be silly to expect any delights from picture. In addition, players note some problems with optimization, but we did not notice difficulties during the tests.

By downloading the presented mod for Lumbercraft, you can get unlimited amount of money on your account. Use them to pump the base and improve the hero.

After testing unlimited money mod for Lumbercraft, we confirm that it works properly. Endless money allow you to improve all types of buildings in your city, including the forge, making your character stronger. You don’t need to do anything special to activate the mod. It is enough to download and install the application following our recommendations. 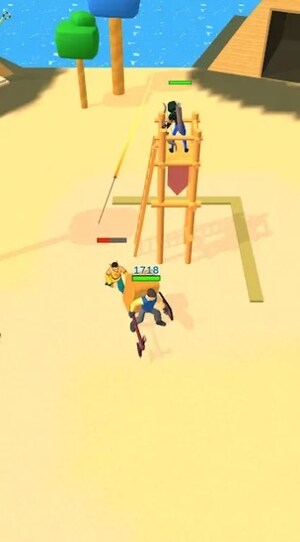 You need to improve your base constantly if you want to be successful. For example, first level sawmill generates extraction of trees, but holds only 40 logs. The more you upgrade it, the more storage it you get. By the way, there is also a special “slow sawmill” in the game. It has slow speed for extracting resources, but this building can hold more than 1000 logs. It is useful if you go somewhere while the game is on.

From a certain point, enemies start to appear in not only dungeons, but also right at your base. In order to deal with them, you need to build several attacking towers. As we said, you can choose between archer on tower and cannon. We recommend taking the archer as his attack range is better.

There are several dozen levels in Lumbercraft where you need to repel enemy attacks. Each of them brings coins to your treasury. However, be careful! If you suddenly die, you will lose all the money earned at the location and will spend finances for treatment. Note that hospital also heals much better after making improvements. It makes sense to improve the store for a better exchange rate and more exchangeable resources.

Lumbercraft offers players not just an arcade, but also a game with RPG elements. Run, cut trees and think over tactics in order to accumulate enough resources to improve the base, as well as to place defense towers correctly. If you suddenly missed this project, then be sure to try it.

How to Install Lumbercraft Mod APK?