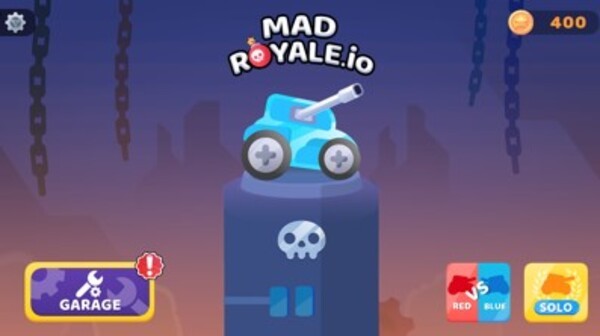 Mad Royale io – Tank Battle – an entertaining strategy in which the most accurate and prudent shooter will be the winner. Every veteran gamer should remember a great series like Worms. Play as cute worms overwhelmed with the desire to kill each other. This gameplay includes various types of weapons and the key to victory was their correct use. This game used the gameplay as a basis. However, it can presents you with a completely different process. The project focuses on fans of tanks and the physics of objects close to reality. Here you can move around the objects on the map and shoot missiles at enemies. The one who remains alive last wins. If you like action games, then also download Freedom Strike: Shooting Games and The Tank.

Mad Royale io – Tank Battle is an entertaining project that has been downloaded hundreds of thousands of times. If this intrigues you, check out our review.

Take part in fierce confrontations between several tanks. At the beginning of each battle, the game provides a map as the place for the development of hostilities. Each time the location is generated randomly, thus adding an element of surprise to each battle. You can expect any conceivable curves of the landscape: mountains, ravines, cliffs and abysses.

Based on the terrain that has fallen out, you should build your own tactics for dealing with your opponent, since the terrain here plays one of the key roles. You cannot break through any obstacles. In most cases, a randomly generated map will not please you with smooth plains. In order to get to the enemy, you have to climb mountains or even dig a tunnel for yourself right in the soil.

Here is how the matches play out in this game. On average, they last a few minutes – ideal for a modern person who launches favorite strategy during work breaks or between other things. Several players participate in the session. Each receives a pixel tank located on one or the other side of the map. Players make moves – choose the type of weapon and make a shot from it. Everything happens in real time.

In total, you can take twenty pieces of ammunition with you. Number of moves for each player is limited to the same amount. Taking turns shooting at each other, the tanks earn victory points. The more accurately your attack on the enemy came out, the greater the bonus you will earn. When there are no free actions left, system counts the success of each fighter. The one who managed to collect more points will win.

By the way, Mad Royale io – Tank Battle also has a leveling system. You can improve the tank’s three parameters, namely: change the wheels, strengthen the armor and install a new muzzle. It is also possible to change the color of the tank, but this will not affect the gameplay in any way. Other parameters can affect greatly.

Strong armor increases amount of vitality in your car. Wheels allow you to go faster and jump higher. Size of muzzle allows you to deal more damage. All improvements require money. While it is not that hard to earn them, the app still needs many coins to be successful.

Download Mad Royale io – Tank Battle mod APK for an unlimited amount of money to get funds to upgrade your tank.

Mad Royale io – Tank Battle is a strategy with an action element in the style of the old-school “Tanks”. The development invites you to become the commander of an artillery crew, whose task is to destroy the enemy. Consider the features of the landscape, weapons, position and capabilities of the opponent. Calculate battle tactics by preparing an arsenal in advance. The battle takes place in real time. Despite the frankly unpretentious graphics, the project turned out to be incredibly exciting. Convenient control, 15 opponents at once and dynamic battles will not leave any player indifferent.

Download Mad Royale io – Tank Battle to try your hand at the most exciting strategy. Although it bases on simple mechanics, it can give you a huge number of interesting and memorable situations.