Madfut 21 is a football app where players are required to open many packs and combine different squads of players. Your main task is to select the best players for your team. We are talking not only about the first team, but also about substitutes and reservists. After everything is ready, participate in various tournaments, analogues of which are Champions League and Europa League. Complete the group stage and fight in knockout rounds. Most importantly, the project under consideration contains only real players and real clubs. Collect a squad of your favorite players and don’t forget about idols of yesteryear! Take control of your own team and defeat the giants of world football. If you are interested in sports projects, then do not forget to download Soccer Cup 2021 and The Spike: Volleyball Story.

Madfut 21 will surely appeal to fans of collecting football players. To make it more convenient for you, we have prepared a detailed overview of the application.

Perhaps the most important advantage of Madfut 21 is that developers used only real football players and clubs here. Have you ever dreamed of getting Lionel Messi on your team? No problems. Would you like Cristiano Ronaldo to shine with you? Easily. Maybe you were hoping to see these geniuses play in one club. Everything is possible! The application presents both the top leagues in Europe (England, France, Italy, Germany and Spain), as well as minor championships. For example, Turkey, Romania, Greece and so on. All players stay over their position and their cards are similar to those that we are used to seeing in FIFA. 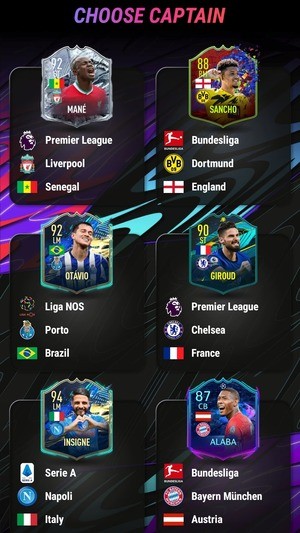 Madfut 21 starts with choosing your team. Put one player at a time in 11 slots. When you tap on a certain slot, a choice of six random players opens in front of the player, but you only need to choose one. It is still necessary to take care of the reserve and reservists after collecting 11 people. The former will be in reserve during matches. However, it is possible to transfer such players in case of injury or disqualification of main players. By the way, team chemistry plays an important role in the application. That is why it is important to try to assemble a team from the same league or choose players of same nationality. It is not always possible, but the more such players you have, the better for you.

When the squad is ready, Madfut 21 prompts you to start your first tournament. It is a kind of analogue of League of Conferences, where average European teams play. There are no giants like Real or Barcelona, ​​but there are strong teams at the same time. First, all teams are divided into groups (4 clubs each). You need to go to the playoffs by finishing first or second. Then there is a knockout game in two matches – at home and away. If you manage to win the tournament, then you will receive a prestigious award.

The matches are text-based quests, where teams play for the most part automatically, based on composition and strength of the teams. This game is reminiscent of numerous football managers. However, you can also influence outcome of the meeting. For example, when your gate is under attack, you need to choose the right defender who can neutralize the threat. The same thing happens during your attacks. Do not forget about the possibility of making substitutions. In addition, players can get injures or red cards. Everything is like in real football. 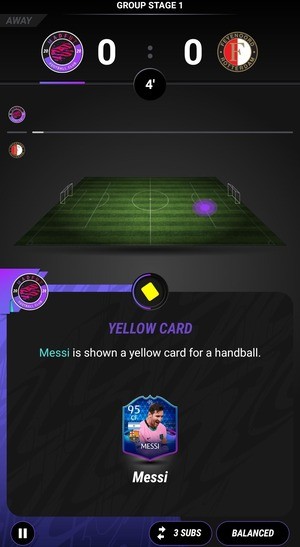 Graphics are not the forte of Madfut 21. Although all the footballers have photographs of them, you will not see any 3D simulation of what is happening on the field. You just have a static picture in front of you, although we can attribute it to pluses. Thanks to this fact, the application takes up little space on the device and is completely undemanding to devices. There is practically no sound in the game. It appears only during matches in form of referee’s whistles or roar of fan stands.

For most of the game, Madfut 21 users open packs with players. There is a huge number of sets, but often you have to pay in-game currency for them. In order to make it more convenient for you, we suggest downloading a mod that allows you to open all packs free. In addition, mod disables all ads in the application. Such an approach allows you to enjoy your favorite game without interruptions to watch annoying videos.

There are several types of cards in Madfut 21 – bronze, silver, gold, and so on. The same player can have completely different indicators – it all depends on the color of his card. By the way, the application also contains legends of the past. These cards are especially rare, but at the same time valuable to any collector. 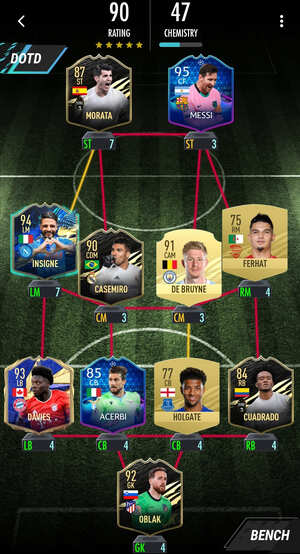 Matches in a game are approximately five minutes long. During this time, teams can score many goals to each other. However, you will need to make right choice of players in dangerous situations in order to prevent a goal or score it. Do not forget to make substitutions if you see that situation is not in your favor. It happens that you need to keep the account and play for time on the contrary. Players can choose style of play of their teams – defensive, balance and attacking. It is possible to change it at any time of meeting.

It is worth noting the variety of Madfut 21 modes. In addition to battles with artificial intelligence, you can also fight with real players. The project provides a special FATAL mode for this. The developers add new sets of football players every day, as well as tasks for players. The list of maps with football players gets updates weekly. In addition, the creators are trying to add new modes, in-game events and come up with new incentives for players.

Madfut 21 is a fun collectible soccer game that combines principles of soccer management and card competition. If you like opening packs in Ultimate Team mode in FIFA, then this project is definitely for you. Assemble the best team and strive for the pinnacle of football!

How to Install Madfut 21 Mod APK?