Fans of the legendary Marvel universe rejoice. Just recently, Android users got the opportunity to install the first RPG game from the famous studio. Fans of popular comics and films have already tried out the MARVEL Future Fight, but the recently released MARVEL Future Revolution is gaining more and more popularity. After all, the main feature of the project is the open world. The developers from Netmarble, who has more than fifteen high-quality applications on account, has released new comics RPG. Despite the huge number of advantages you can also create own Marvel hero and participate in real-time battles. Don’t forget to get acquainted with another fascinating plot.

The role-playing game was released on the Android platform quite recently, so users have not yet had time to evaluate the application. However, MARVEL Future Revolution promises users an exciting storyline and high-quality graphics, which gives players the opportunity to enjoy epic battles between superheroes.

MARVEL Future Revolution is part of the entire Marvel Universe. Throughout all the adventures, you will be able to observe popular heroes, get to know them and even an article as part of a close-knit team. 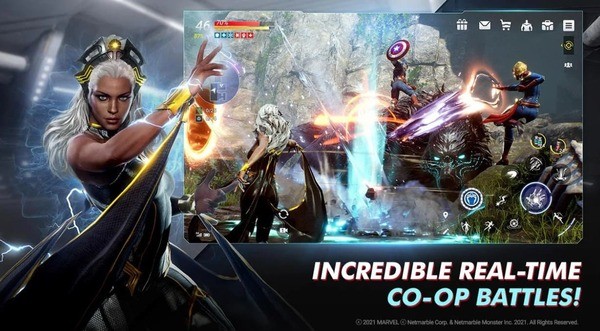 A narrative role-playing game allows users to participate in dialogues with famous characters. We can say that you will definitely hear branded phrases and interesting stories from many of them. The plot focuses on events from the original Marvel films. The world is on the brink of an apocalypse and Vision sacrifices itself for the good of humanity. The merger of the worlds was postponed for indefinite amount of time, but this does not ensure the safety of the planet’s population. All superheroes need to unite in a team and do everything possible to ensure that peace reigns on Earth.

The character creation process awaits you right after the prologue. We can name MARVEL Future Revolution as a full-fledged role-playing game where you can try yourself in the role of favorite superhero and give him special skills. It is worth noting that a certain superhero has his own unique chapter in this story. 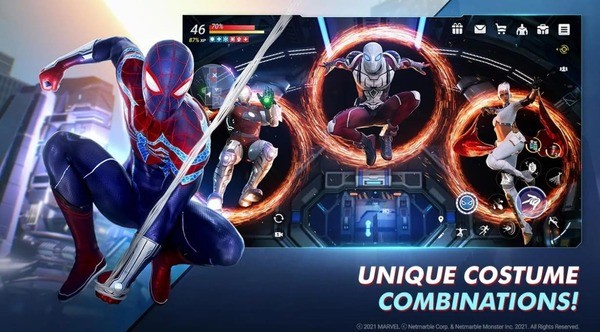 During the game, players have to perform simple tasks, which mostly depend on the storyline. Such missions bring expertise and funding. Quests are located in the upper right corner and are available for viewing at any time during the adventure.

MARVEL Future Revolution surprised many players with high-quality detailed graphics. Developers presented all the characters that have become sympathetic to fans of comics universe in every detail. We want also to mention epic battles that involve beloved heroes and their enemies. The graphics fully convey emotions, process of conversations and 3D characters who are dressed in their famous outfits.

The musical accompaniment changes quite often. After all, each cut-scene requires a separate background music to convey all the emotions. It is worth noting the voice acting of the heroes. Actors did their job in the best way. Most of the voices of famous superheroes coincide with the original voices of the actors.

The battle lies in wait for the protagonist almost everywhere. In such cases, players can use a basic attack, five special moves and one super skill. You will be able to upgrade all the techniques in the character’s menu. However, no matter how much experience and money is invested in improving abilities, the main problem is the long recharge of skills. Therefore, we offer you an opportunity to install the application with a built-in mod that removes recharge time and provides no skill cooldown. 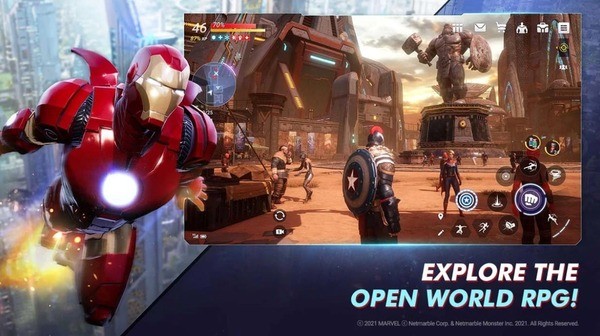 MARVEL Future Revolution application takes about six gigabytes of memory, which requires a long installation. Therefore, great opportunity to try out the new game from Marvel will take approximately seven minutes of download with a good internet connection. First, you will have access to cut scenes in the form of a prologue to the game. The main screen of the game includes several important sections at once. Starting with the map on the left with enemy heroes and necessary buildings displayed and controls on the right along with basic information about the hero.

The control in the application is quite simple, but everything is individual, taking into account the characteristics of the selected character. Main player will be able to move around the field using the joystick on the left side of the screen. On the right, you can find full spectrum of the hero’s actions: jumping, attacking, hitting and splitting.

Fans of the Marvel universe have rightfully appreciated the role-playing game MARVEL Future Revolution. After all, it allows you not only to become a part of the fantasy world, but also to get to know all the characters better. Enjoy a unique plot, which ending depends entirely on the actions of main game characters.