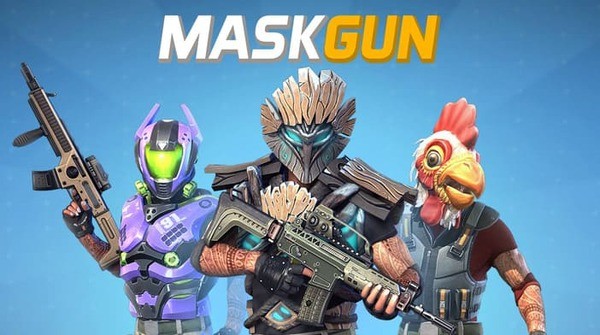 MaskGun: Multiplayer FPS from developer June Gaming is a free multiplayer 3D action game with a focus on team play. Look for enemies, wandering around the location with weapons and shoot at them as soon as opponents are in sight. You can play on your own or together with other people by joining in a team. As the battle progresses, pick up cartridges, first-aid kits and coins. You can use them to buy one of the masks, change the external skin of weapons and armor. At the end of the game, check detailed statistics showing the performance of the players. Do a variety of tasks to level up and open access to new opportunities. Online action game contains exciting shootouts with players, convenient controls and quite acceptable graphics. We also recommend downloading Chicken Gun and Cops N Robbers.

Take a closer look on the main advantages of the project. Despite the lack of any innovation in the gameplay, number of downloads of the application has already exceeded ten million. Moreover, this figure is constantly growing.

After a closer look at the capabilities of MaskGun, it turns out that there is only one mode here – team battle. You can create a lobby – open or closed or join a random public game. The closed lobby is good for playing with friends. You can add a friend in the corresponding section of the game menu.

However, just click on the “Play” button to search for a quick game. This action starts the automatic process of finding a battle in which you can take part. No choice of sides, cards, or other frills. The game does everything by itself, as you just have to play. Everyone can decide, plus it or the poverty of game modes and gameplay design.

When you first start Maskgun Multiplayer FPS, it is necessary to complete tutorial, from which you can learn about the control features. In full accordance with the philosophy, the controls are also very simple. You can jump, reload and change weapons. Healing and throwing grenades are also available. With these functions, you can fully control the gameplay. Shooting here occurs automatically when aiming at an opponent.

This is a very practical solution, because thanks to such an innovation, it is possible to react to the emergence of a danger in the shortest possible time. Easily eliminate an opponent who has come out from behind cover. It is important to provide yourself with an advantage during a team battle, which is a priority not only for users, but also for the development team.

Put on the mask and pump

An additional feature of Maskgun Multiplayer FPS is masks. They provide the player with protection or they can endow the character with special skills. You can do better and upgrade shells, clothing for camouflage and protection. Stick stickers on it, draw special drawings and paint. Several updated maps are available to you, which can attract the attention of even the most experienced players: Halloween, Ryokan and the most interesting – the ghost town. There is also Lighthouse. In order to climb the rating table, you have to complete various difficult quests and missions. VIP player function is available for the most active users, which offers many interesting moments in the game. Therefore, you can make a large assessment of rewards, climb the leaderboard and deservedly occupy the niche of the winner.

Maskgun Multiplayer FPS takes up very little space, because of which it starts up very quickly. Owners of weak devices will be clearly pleased. However, the graphics are little disappointing. It would not have been possible to make the application so easy without it. Shooting due to the unnatural appearance of the opponents does not feel as good as we would like. At the same time, all characters are individual. Make them even brighter and more interesting with the help of various skins. In addition, there is funny music and high-quality sound design in the application.

After installing Maskgun, you can open a special mod menu, where the following improvements are available:

Team shooters have become popular for a very long time. Many people like to remember CS, which mechanics remains the same in many modern games. Even before it, there were many popular multiplayer shooters. Since then, there have only been more of them, but the army of fans of the genre has not diminished in any way. There are always fans of shooting on virtual battlefields. Every sufficiently high-quality game finds its audience very quickly. It happened the same with Maskgun.

The battles in the project take place on maps stylized as Chinatown. Several participants from each side for a certain time must score more points than rivals do in order to win. Get points mainly for kills. If you commit double or triple kills, you will get even more points.

Check current score for kills performed by each of the team members at the top of the screen. Therefore, if it seems to you that one of the partners is pulling the team down, then you can always easily find out who exactly.

Sum up results after the match. It turns out who scored the most kills, gets more experience. Experience levels open up new gaming possibilities. For example, the clan system is unlocked to users upon reaching level three. Increase in experience allows you to buy new weapons, of which there are quite a lot in the game. However, not all of it is available free in-game currency – some guns require only real money.

In addition to winning matches, you can earn useful currency by receiving daily login rewards. The longer you constantly enter the game every day, the more significant the prize you get. Thanks to this, there are always many people in Maskgun. All this, of course, is only for the benefit of the players.

Maskgun Multiplayer FPS is a rather controversial game. It has both pros and cons. A large number of weapons and low system requirements compensates a rather poor number of modes and weak graphics. In addition, there is a very fast selection of matches, so you can play almost continuously, which is also very important.