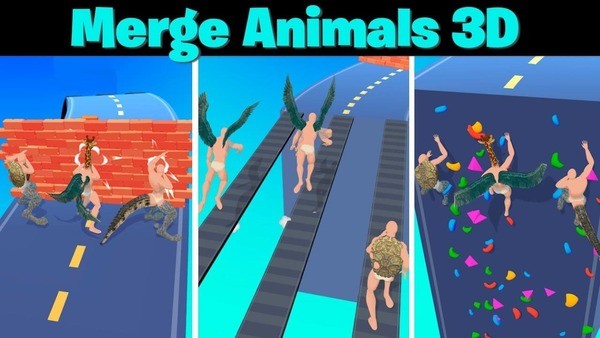 Merge Animals 3D is a fun simulator from the developers of SayGames Ltd. Here you have to breed various animals, modifying a person. The incredible possibilities of genetic engineering gives birth to the most unusual creatures. A huge number of species, you can show all your imagination! So curious to know what happens if you cross, for example, a man with a crocodile. After you finish your makeover, take part in races with other participants and overcome obstacles. A person with more arms will be better at climbing walls, while a person with a crocodile tail will swim faster. This application will appeal to gamers of all ages, but especially children. We also recommend downloading Building Destruction and Goat Simulator.

Thanks to the pleasant gameplay, this project has grabbed a piece of popularity. More than 5,000,000 PlayMarket users have already downloaded the Merge Animals 3D, so join them!

You have to modify a person in Merge Animals 3D. Learn the genes of various animals to him: crocodile, rabbit, giraffe, chimpanzee, eagle and others. In total, more than 10 animals’ DNA is available in the application, while hundreds of modifications can be made. You have to collect several hundred unique hybrids, differing from each other in characteristics and appearance. Creators thought out everything to the smallest detail, which allows you to maximize the extraordinary atmosphere. You can create whatever you want. The main thing is to have a clear idea of ​​what you want. The resulting human animal will have its own characteristics. Depending on the animal you choose, the creature can become very fast, agile, or strong.

When your Merge Animals 3D character is ready, take him to the start of the race, where you and other mutants will traverse an impromptu obstacle course. Players have to overcome pools of water, sheer walls, where they need to climb up in the style of a rock climber, break brick walls, jump over barriers, and so on. As you might guess, at different points in this obstacle course, users will need different skills. For example, a stronger mutant will break the walls better, and a hybrid of a man and a tiger will be able to run faster. Do you want to deal better with walls? Get yourself the wings of an eagle. However, players cannot take several useful skills at once, so they have to choose. A fast mutant can be weak at the same time, so you won’t be able to create a superhuman. By the way, there are about 20 such tracks in total in Merge Animals 3D. You will see forks on many of them. For example, you can run or swim part of the track. Choose your path based on the strengths of the mutant.

Merge Animals 3D gladly gives you the opportunity to show your adaptation skills to the harsh wildlife environment. There is nothing in the local gameplay that you could connect with reality, but this in no way prevents you from plunging into the sea of ​​possibilities. Before each start of the game, you have to decide on two different types of animals, from which something unique will come out. The point is that you can create, for example, a hybrid of a man and a bear, a man and an eagle, a man and a giraffe. As you know, bioengineering has been trying to achieve something like this for a long time. Now you have the opportunity to participate in exciting experiments.

The animal obtained as a result of selection has its own unique characteristics that can help to move quickly and so on. In advance, you will not guess about the result of crossing, which brings a touch of excitement to the project.

Merge Animals 3D has three-dimensional graphics, as well as a huge number of different models of creatures that allow the user’s imagination to roam, crossing various mutants. In addition, greatly implemented the races of players along the obstacle course.

After each level, you unlock more and more new animals. However, you have to watch a long promotional video to add them to your collection. In order not to waste time, you can download a mod that will allow you to access new animals without viewing ads immediately.

The storyline of Merge Animals 3D begins with the fact that you select a pair of animals to cross from a huge list of different species. The game, according to certain preset algorithms, conducts their combination and hybridization together with a person. Each individual received has a set of unique abilities and behavioral motivations. You can pre-calculate their features and characteristics in a special editor. At the exit, dozens of the most incredible creatures can turn out.

Their viability and success depend on subsequent activities. Participation in races with other mutants, where you have to overcome many obstacles and difficulties. The goal of the game is to create the strongest and most developed beast, one of its kind, forcing other monsters to admit their own evolutionary inferiority and begin to offer prayers to Charles Darwin.

If you are looking for a simple yet addicting sandbox, then Merge Animals 3D is definitely worth downloading. This funny world will meet the gamer with its picturesque locations, abundance of possibilities, funny nuances. Diverse gameplay will not let you get bored for a single minute. Hatch unique mutants and then go on an exciting race.