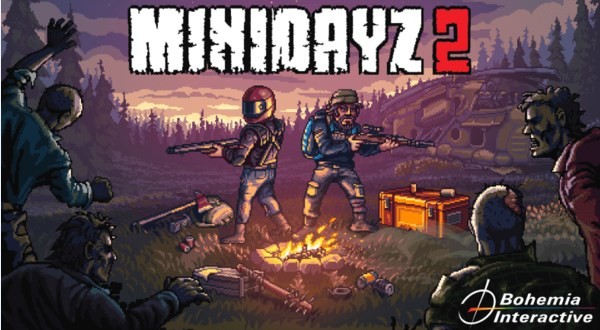 Not so long ago, developers released a new part of famous survival horror – Mini DayZ 2. Unique pixel game focuses on survival among the undead and its second part gives an opportunity to try on a role of survivor in mad apocalypse. Scientists’ assumptions were correct: the virus gradually invaded the entire population. Humans mutate and turn into undead without any hope of salvation. Not all people have caught the virus and now survivors are desperately trying to avoid living death, fleeing and hiding in different parts of the planet. However, a new hero enters the battle with living dead, wishing to defeat evil virus and save remaining people. We invite you to check out other great horror games, such as Kill It With Fire, as well as Imposter Solo Kill.

Mini DayZ 2 from developer Bohemia int. is an improved version of original version. It is a continuation of popular Android strategy tested by an audience of over 50 thousand people. Application has a score of 3.7 and is becoming more and more famous for its unique storyline.

After surviving in helicopter crash, main hero finds himself in a wooded area, where strange buildings are located nearby. Going out to the trail, you find old abandoned van with a meat knife inside. In addition, player faces first opponents on the way to the mysterious buildings. An accidentally found weapon becomes a real salvation for your hero. You can also find all resources necessary for survival in nearby buildings. However, exploring the world further, you can find the most interesting discoveries and unique items.

Survive at any cost

Zombies can be anywhere: in grass, in buildings and even in the forest. The player’s goal is to survive and help those who are still left on this planet survive. In addition to fighting, gamers should also think about their health, as well as satiety and sleep. If the new battle is not up to the main character, he can hide and avoid it. After all, your goal is not just to win, but also to survive.

During the training mode, you take control over Boris. Here comes the first piece of advice: try to take everything you can to survive. It is possible to find both food for survival, medicines and resources for rescue: scrap metal, scotch tape and wood. Each of items can help you in making good weapons and equipment in the workshop.

A character card available in upper left corner allows players to learn more about character, view hero’s skills, level of his protection and health. The inventory is also located here. After training, you have access to two main characters: Boris and Nadia, survivors of this apocalypse.

In order to extract useful resources, player can move around the map to various locations open for conducting a raid. Here you can find useful things and necessary resources needed to improve and open new structures in the camp. However, player faces the undead, so you should always be on the lookout. 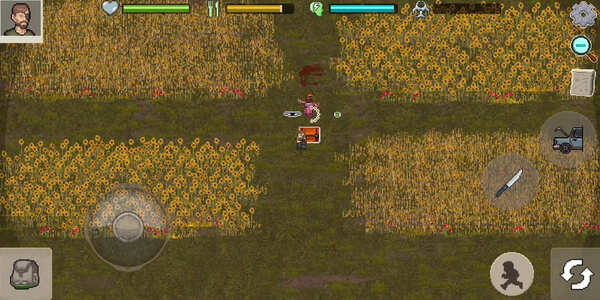 Game features nice pixel graphics, which perfectly matches overall plot of the game. Developers also made cards of main characters in pixel graphics, but you still can see their faces. Boris has a blindfold on his left eye and Nadia has blond hair. Dueling the gameplay process, characters appear as completely small dots that need to study the location. Despite the pixelated graphics, the game is colorful and lively thanks to the right palette of colors.

There is no musical accompaniment in the game. However, during the game, you can hear sounds of the character’s footsteps, battles with undead and birdsong. Actions of the characters are also voiced. In addition to voice acting, next heroes’ phrases are available: “I’m not hungry”, “It hurts” and “How many of them are there”.

There is no paid content in Mini DayZ 2, but not all characters are open to use. Now, you can open all the missing characters immediately after training with our built-in mod. In addition, we offer you access to special mod menu where you can find several useful options.

Throughout the game, you will be able to meet several different characters, each with own unique story and abilities. Unfortunately, some of them are unavailable for interaction. However, this becomes real thanks to our mod. After checking its work, we guarantee you that above-mentioned features function perfectly. At the same time, our mod may malfunction, so carefully follow our updates if you suddenly have problems. We also want to say few words about mod menu that you can activate at any time during the gameplay process. There is an option to increase speed of movement, speed of attacks, high damage, unlimited ammo and more.

Players learn about how the young fighters got into territory of the apocalypse. The crashed helicopter in the center of the camp is the only reason for appearance of crew in the middle of sad events. Next comes the tutorial, where you can take one of the heroes under your control. Learn how to fight monsters, survive in conditions of the apocalypse and many secrets of mutagenic virus.

You can move around in the game using joystick on left side of the screen. The right side features all interactions and actions available for character: attack, opening various boxes and cars, as well as changing weapons. In the left corner you can find special inventory where it is possible to find food to refresh main hero and medications to help stop bleeding after undead attack.

A real apocalypse awaits players in Mini DayZ 2, so try your best to survive and save the rest of survivors. Explore locations, conduct raids, upgrade your camp and defeat a mutagenic virus that has swept the world.