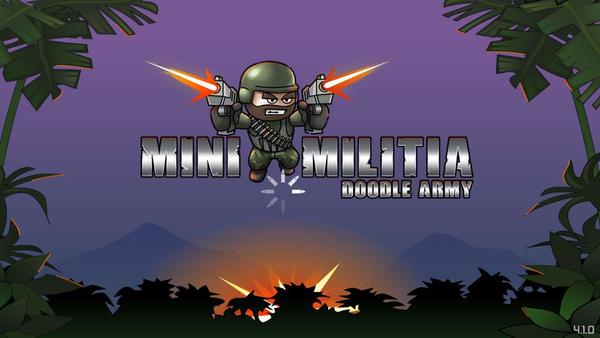 Immerse yourself in exciting online battles in the addicting multiplayer shooter Mini Militia – Doodle Army 2. Use a huge arsenal of weapons to kill all enemies and seize the dominance on the map among six fighters, who try to destroy you and become the best. Your main task is to survive and inflict maximum damage on enemies. To do this, it is important to choose the correct trajectory of a bullet or grenade throw, as well as deftly control your jetpack, taking off above the map surface. Climb to the highest point on the location and throw grenades at your opponents or go into the very heat of the battle and shoot the enemy point-blank. Develop your own unique strategy that can bring you success.

Customize the appearance of your fighter, choose your weapons and enter the arena. Experience dynamic gameplay with intuitive controls while playing with bots or challenge your friends and try to beat everyone online. Moreover, you can try yourself in Galaxy Attack: Alien Shooter if you like cool 2D action games.

Read on and find out the main advantages of Mini Militia – Doodle Army 2.

Enjoy simple controls and fly with your jetpack

Mini Militia – Doodle Army 2 is not exactly a classic action game. One of its main features is that your hero has a jetpack that can help to gain altitude or abruptly fly to the side. This maneuver can help to carry out a surprise attack or escape from enemy bullets. The controls in the game are so simple that even a child can master it. Just use two joysticks, choose the direction of movement, aim at enemy and shoot. However, be careful! Any delay here can cost you your life, because not only the speed of decision-making is important, but also a good reaction, as in any high-quality shooter.

Explore the entire arsenal of weapons

To make the game more diverse and varied, the developers offer gamers a wide range of weapons to destroy enemies. Initially, you have only a regular pistol, a few grenades and a submachine gun, but as you progress through the game, you can get a sniper rifle, laser blaster or grenade launcher. Don’t forget about ability to use two-handed guns like Uzi. It can double your firepower, but at the same time, such a weapon is only effective at close range. Complete missions, earn coins and unlock new types of weapons for more colorful and fun destruction of rivals.

Mini Militia – Doodle Army 2 is also great because there are many interesting locations where battles take place. The coolest thing is that they are all diverse and unique. Therefore, you need to work out certain tactics for each map. Deep ravines, high mountains, gorges and even water bodies – maps present all this in abundance. Each of landscape elements can have a direct impact on the battle course, so don’t forget to explore the location in parallel with war. Yes, it is not easy, but such a skill can greatly help you during the battles.

Finally, we come to the main feature of Mini Militia – Doodle Army 2. The game has gained popularity for multiplayer battles where up to six people participate at the same time. If you are going with friends in one place, then it is possible to connect up to 12 people through one Wi-Fi source. Each fight lasts a certain amount of time. During this period, you need to make as many frags as possible, who as a result gains more kill points – wins. Do not forget that there are cool weapons and first aid kits scattered on the map that can help you a lot. Explore locations, deal damage to opponents and climb the top of the leaderboard to get as many bonuses as possible at the end of the battle. 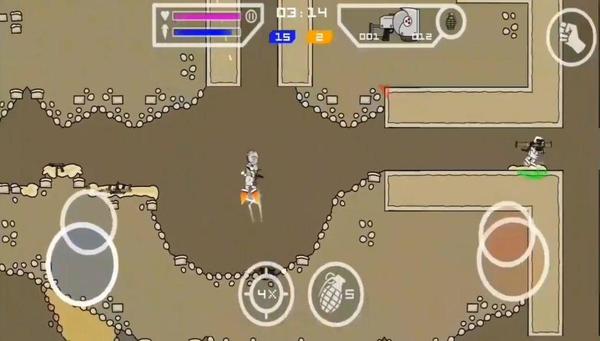 The game has in two-dimensional graphics. The developers made battles scene in a special slightly careless style, but this, in our opinion, even gives the game a special charm and is its hallmark. At the same time Mini Militia – Doodle Army 2 due to the usual graphics can work on almost all android devices. The sound in the game plays an important role, because there are often times when you do not see your opponents on the map, but hear their firefight. From these sounds, you can understand how close the enemies are and think over your further behavior. For example, throwing grenades at enemies.

Grenades in Mini Militia – Doodle Army 2 play a rather large role due to its power. You can throw it into enemy cover in order to inflict as much damage as possible. However, there are only three of them for each fight. Now you can download a modified version of the game and get the opportunity to use unlimited grenades during battles. Throw explosive grenades at your enemies. In addition, mod removes all ads, which is important, since in the regular game version has tons of annoying ads.

We played Mini Militia – Doodle Army 2 to check everything for the convenience of our website users. Based on the test results, we can confirm that the mod is functional and safe. Install the modified version of the game and enjoy all the benefits.

Players can choose the model of their characters directly before the battle. There are many skins and clothes to try for your hero. Some things open later, as you progress through the game or you can obtain loot boxes for game coins.

In addition to the online mode, Mini Militia – Doodle Army 2 offers a survival mode where no internet connection is required. Here you need to hold out as long as possible, fighting off attacks from computer opponents. The longer you live, the more bonuses you earn.

The game also has realistic physics. For example, if you developed high speed on your jetpack, then it is very difficult for you to stop. You can easily fly over the desired point on the map by inertia. At the same time, flight path of the same grenades or rocket shells is quite realistic and requires the player to have basic knowledge of ballistics.

Don’t forget to delete the original version of Mini Militia – Doodle Army 2 before installing our modified version to prevent errors during installation process.