Modern Combat 5: eSports is action game for Android devices from Gameloft SE. Fans of shooting and war games will love this app. Here you need not only fight, but also improve your fighters to incredible power! Engage in fierce battles and fight for survival to become the best! For fans of large-scale shootouts, our team has prepared tank battles in Panzer War and cool shooter Modern Strike Online.

The game aims on developing combat skills. Play not only alone, but also with a team. It all depends only on you and your choice. Arm yourself and engage in ultimate battles on the city streets. 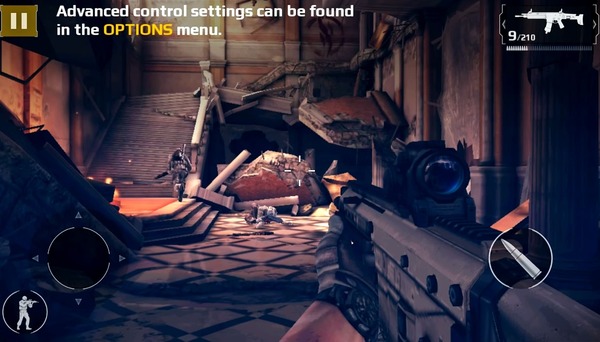 Many truly spectacular and exciting battles cannot but delight the eye in Modern Combat 5. Entering the game, you can choose your character from the provided hero classification. There are nine classes, which include various characters. Choose the type and style of your characters that suits you best for combat and aesthetic reasons. Game features such heroes as Stormtrooper, Commander, Mercenary, Minesweeper, Scout and many others, depending on activity direction. Apply and upgrade hero skills and test its features in various modes, where bloody battles take place. In order to improve the special skills of your players, you need to earn as many points as possible and spend them on improvements. Everything is quite simple, game mechanics are similar to other action games, so it is not difficult for you to figure it out and become a champion! Game includes rating that shows your fighting skills according to the rest of the game’s users.

The network component of Modern Combat 5 is truly unique unlike other applications. In addition to the fact that you can call your friends and acquaintances to participate in battles, you can also play with other users around the world. Show everyone how great you are and become the best with the help of the rating! Many fierce and spectacular battles on the network won’t leave you indifferent. Gather your squad and join the battle against other users online. Players can use the team chat during fights and battles for better communication with each other. It is a pleasant addition for a variety of promotions and prizes, where you can participate online free! Unlike other action games, Modern Combat 5 has “Observer” mode where you can watch other people’s battles online and learn some combat techniques for yourself in order to use them in future.

Users often face poor and unresponsive controls that ruin the entire gameplay. However, it is definitely not about Modern Combat 5. Fell the peak of your power with the help of intuitive controls made by developers in good faith. You have to customize it to your own preferences and wishes. Fighting and shooting tactics have never been so easy and convenient thanks to this distinctive app feature. In addition to playing in a team, you can play in a solo survival mode. Stay alone with yourself and city streets to fight in constant battles. Be vigilant, arm yourself and build your defense tactics. 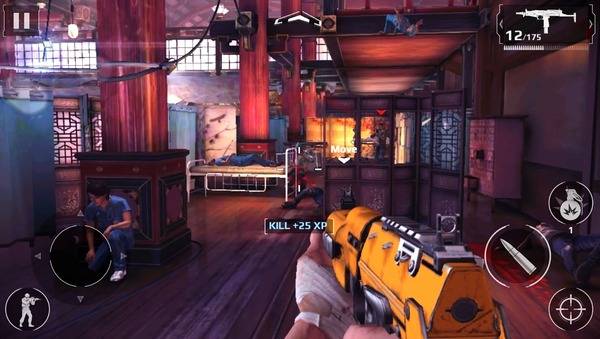 Progress won’t keep you waiting long and agonizes when you already have improved skills and abilities. Modern Combat 5: eSports modes allow you to earn points as quickly as possible and become better than other users of the game. In order to upgrade your weapons and get a new, more powerful one, you must master the usual standard and gain points and skills in fights during the battle. You also have a unique opportunity to show your own creativity and imagination and create a weapon according to your own characteristics. For example, you can customize its attachment from the many different modules presented in the game.

Excellent graphics in Modern Combat 5 presented to us by the developers of the Gameloft SE group, which cannot but please you. There are well-drawn characters, weapons and locations, so that everyone here can find pleasant visual features. The voice acting and musical accompaniment are also at the highest level, which imitates combat and completely immerses you in the gameplay.

Our mod can help you experience more uplifting emotions and ignite all your excitement. God mode allows you to confidently go through the story campaign and improve your shooting skills in not too dangerous conditions.

Our team tested god mode in Modern Combat 5: eSports. Based on test results, we can confirm that modified version works well on Android devices. Using this version, you can activate a special function that disables shooting in you. This helps a lot in some of tricky parts of the campaign. 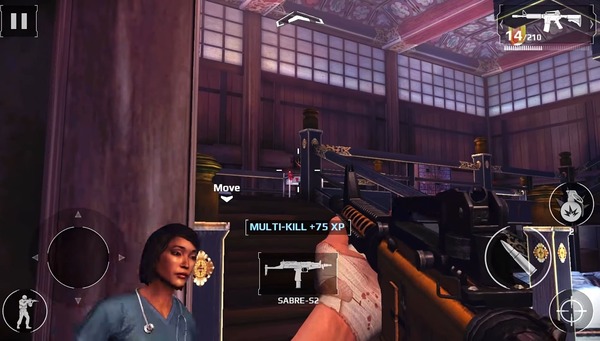 Welcome to an interesting and addictive game with elements of shooting and building your own strategy. Arm yourself, call your friends and assemble your own squad to fight against the rest of the users – squad by squad. You can also play alone in solo mode. The main thing is to fight and become the best version of yourself in terms of your rating.

Modern Combat 5 is an excellent action game for shooting lovers. Play in a squad and crush others, call your friends and show is the best! Develop your tactics and strategy and crush everyone in your path. Our solution can help you with this, as your rivals simply cannot attack you.

How to install Modern Combat 5 Mod?

Don’t forget to delete the original version of Modern Combat 5: eSports before installing our modified version to prevent errors during installation process.