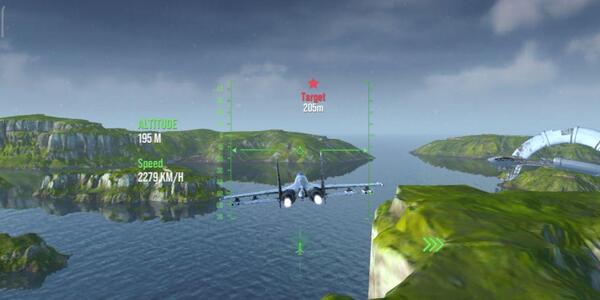 Modern Warplanes is a flight simulator game developed by GDCompany. Sit at plane controls and go into the abyss of exciting battles. Take part in fights with real players, complete missions in company mode and try your hand at numerous game modes. Most importantly, unlock new planes and improve their characteristics.

The game doesn’t have any plot, and yes, given the component of the simulator, it is not needed here. Get a little training and get down to business right away. Do your best to make it to the leaderboard and earn the respect of pilots from all over the world. If you like real action games, then download Payback 2 and Grim Soul.

For several years of its existence, the game has become a cult with more than 10 million downloads. Despite the variety of flight simulators, only Modern Warplanes managed to win the hearts of players. Let’s see how the game did it?

Main task in Modern Warplanes is to destroy your opponents. It doesn’t matter if they are bots or real players – we just catch up and smash enemy equipment to pieces. Our fighter even shoots itself. You just need to aim at the enemy plane and hold it there for a few moments. You can also launch guided missiles with a special button near the sight. 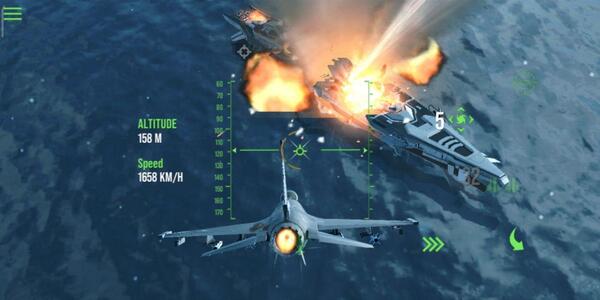 More than a dozen planes for your taste

The range of Modern Warplanes includes a dozen different combat aircrafts. However there are only two prototypes of the sixth generation, and the remaining ten are real-life fighters and interceptors, detailed and recognizable by true connoisseurs of flight simulations. Naturally, each “heavenly swallow” can boast of its own unique weapons on board, purely individual characteristics, and options you can upgrade by three dozen different game items, including additional guns, missiles, etc. 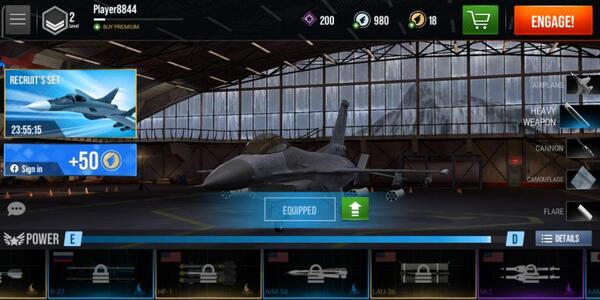 You can control the warplane by means of an analog joystick on the left side of the screen, and buttons on the right, where there is acceleration and rapid turn in the air. Firing rockets occurs when you press the rocket button, while firing a machine gun is automatic. We would like to note the possibility of releasing distracting heat bombs, which help from enemy missiles especially in online mode. 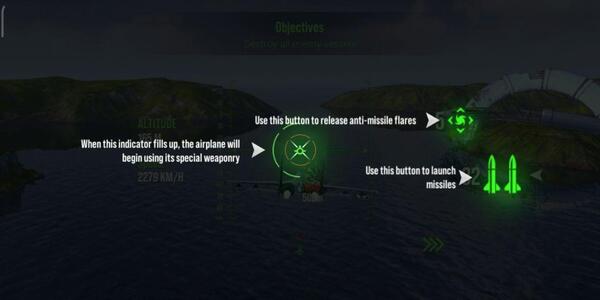 Play whenever and wherever you want

Modern Warplanes does not require a permanent network connection. Yes, there is online mode, and it is the main part of the game, but it is possible to play offline. Now the game has two online modes and two modes available without the Internet. What is even more interesting: the developer is going to introduce a kind of esports component into the game.

The graphics in the game are not inferior in quality not only to larger mobile projects – they are able to compete even with some of the console ones! Excellent textures in high resolution, beautiful 3D effects, even weather conditions – everything is available. In short, Modern Warplanes looks just fine. At the same time, there are no problems with optimization – everything is smooth, FPS does not sag.

The audio component perfectly complements the above graphical benefits. The roar of planes, realistic voice acting of combat actions and real pilot negotiations complete the game and give it an atmosphere.

Despite the fact that Modern Warplanes focuses on multiplayer, this doesn’t mean that it has no modifications for it that could facilitate the gameplay process. We can offer you to download a mod for infinite bullets, which will allow beginners to accustom to combat and provide additional fire support.

As mentioned above, there are two types of weapons in the game – a machine gun and missiles, while the machine gun fires automatically, the pilot is responsible for guiding the missiles. Given the battle intensity, shooting into enemy with a rocket is quite difficult, so many players use the machine gun as their main weapon. Let it do less damage, but on the other side, the bullets hit the enemy aircraft more often than missiles. 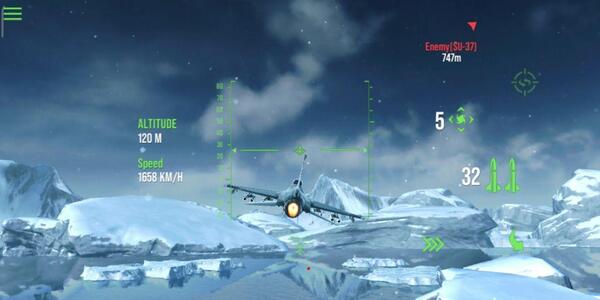 The only caveat is that in Modern Warplanes the machine gun tends to overheat. So you won’t be able to constantly shoot from the machine gun. After 5-10 seconds of firing, you need to wait a little for the weapon to cool down, so you have to use less effective missiles.

Our infinite bullet feature can solve this problem. During the battle, you won’t longer face such a problem as machine gun overheating and will be able to shoot at enemy planes absolutely without installation. Such a turn of events can give you a clear advantage and allow you to take the lead in the battle in terms of shot down aircrafts number.

We have tested the mod for infinite bullets on our devices and we assure you that it functions without any problems or complaints. Immediately after launching Modern Warplanes and passing the tutorial, your plane will shoot without stopping. If you suddenly run out of missiles (which is extremely rare in battle), you can still use them.

In order to get all the above-mentioned functions, you do not have to do any additional actions. Just download the installation file from our website and run it on your device.

Modern Warplanes is one of the most promising flight simulators for Android. The game is able to offer a lot – beautiful picture, large number of equipment and weapons and ability to play offline. Moreover, the developer doesn’t stop working and promises to add new features to the game as often as possible. It is difficult even to imagine where the further development of the project will lead. We can only hope that developers will continue in the same spirit in order to bring creation to perfection.

How to Install Modern Warplanes Mod?

Don’t forget to delete the original version of Modern Warplanes before installing our modified version to prevent errors during installation process.