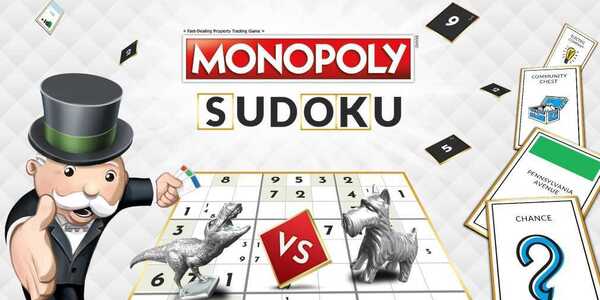 Monopoly Sudoku is a game that allows you to develop your intelligence and at the same time have a very interesting time. It is a one-of-a-kind blend of monopoly and Sudoku genre. Solve interesting Japanese puzzles as you plunge into the atmosphere of the beloved monopoly. Conquer new territories, rise in the ranking and show everyone around what you are capable. This addicting game allows you to fight against real players in the ability to solve Sudoku against the clock. Up to 10 people participate in battles at the same time, and victories bring you points for the world ranking. Please also check out the iconic Monopoly on our website.

Monopoly Sudoku is a unique blend of genres that takes the best of both worlds. Many players like this game for its gameplay and style.

The point of Monopoly Sudoku is to solve Sudoku faster and better than other players. The field consists of 9 3×3 squares folded into a large similar square. In some cells, (depending on the complexity there will be more or less numbers), numbers from 1 to 9 are already filled in. You need to enter a number from 1 to 9 in each cell. You shouldn’t repeat numbers in those rows, columns and squares. The faster and more successfully you can cope with the task, the more points you receive and the higher you rise in the seasonal rating, showing the success and skill of the players.

Plunge into the atmosphere of the beloved monopoly

As the name implies, Monopoly Sudoku is not only a solution to the most interesting Japanese puzzles, but also a journey to the world-famous board game – Monopoly. By winning matches, you get at home – a local analogue of the experience you need to level up. You can make a new die roll when you get a new level, as well as for daily rewards. If you get into the territory of enterprises or start, you can also make a new roll. After capturing the terrain, you get a bonus to points and houses or an instant increase in resources when you win a Sudoku match. The developers built the entire gameplay of the game around the monopoly map.

In addition to the basic gameplay, you have additional options with dice rolls, map travel and Sudoku battles in territories. For example, four daily Japanese puzzle battles that give you throws. There are also quick 1v1 matches with different players that do not affect the main seasonal rating. Moreover, if you want to fight with your friends – such an opportunity is present in the game.

The graphic component of Monopoly Sudoku is well developed with everything done in monopoly style. We can mention perfectly matched nice colors, good rendering of every element and maintaining the overall design in everything. The interface is very pleasant, not overloaded and understandable to anyone, from a beginner to a pro player. Musical accompaniment pleasantly focuses on the gameplay, without drawing attention to itself. In-game sounds don’t hurt the ear and only help to notice the right moments.

The developers of Monopoly Sudoku made many concessions to improve the gaming experience. For example, there are absolutely no annoying in-game ads after any action and offers to watch videos for trifling rewards. In addition, when creating the game, they abandoned any donation, whether it affects the progress or gives an advantage over other players, purchases or simple cosmetic improvements. However, developers distribute the game on a paid basis, which alienates many and prevents them from enjoying an interesting project. Mod for Monopoly Sudoku gives you the opportunity to try the game free, without thinking about whether to enter a new world for yourself or save money.

Our team recommend you to download Monopoly Sudoku Mod, because with it you can enjoy the game in full without paying any money for it. Installation file is completely safe. In addition, game is well optimized and works fine even on weak devices.

The gameplay is entirely tied to solving Japanese Sudoku puzzles against other players. Each victory brings you points in the seasonal rating and at home, which replace experience here. In addition, all the action takes place on the monopoly map and the seizure of territories gives you an advantage if you hit them further – a multiplier for resources received upon victories or instant rewards. The more and faster you win, the more territories you capture and the higher ranks you occupy.

Monopoly Sudoku is an interesting and unique combination of two completely different genres. The game allows you to develop your own abilities and at the same time have fun in a unique atmosphere.

How to install Monopoly Sudoku Mod?

Don’t forget to delete the original version of Monopoly Sudoku before installing our modified version to prevent errors during installation process.