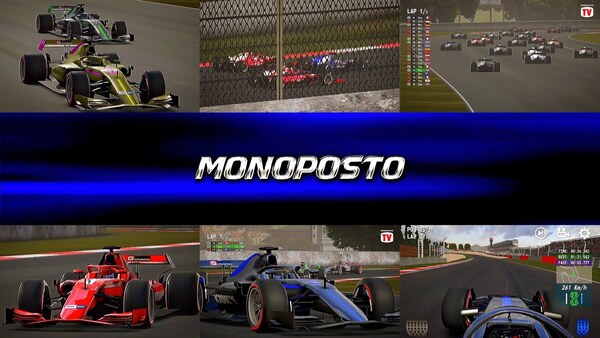 Monoposto is a racing game in which the user can try his hand at the best racetracks in the world. Take part in Formula 1 competitions and win! The game also has a function of online battle 1 on 1 with another player. Enjoy realistic racing on real racetracks by driving prototypes of real cars. The project does not have a license for real riders and teams, but the tracks here are all real. In addition, you will surely like the amazing graphics, which have not so many analogues in Android racing. If you love racing, you can also download Nitro Master: Epic Racing and Truckers of Europe 3.

Enjoy real live racing as you start your own Formula 1 racing career.

Monoposto offers you to compete with another player in an interesting online duel. It looks like a one on one fight. You start and drive several laps at the same time. Player that arrives first wins. Your car cannot crash into the enemy, because they all dissolve like ghosts if you try to drive through them. At the same time, you can always see how much you are behind or ahead of him. Since the game is quite new, sometimes the wait for the enemy may take several minutes. However, be sure that eventually you will find it.

Outsmart your opponents by passing them around the corner, drop and pick up speed, and remember that you can overtake your opponent both on the straight and during the corner. Here you will find 25 tracks that exist in the real Formula 1 calendar. The Grand Prix of Bahrain, Italy, Saudi Arabia, Turkey – this and much more are available in the game and the tracks here feature amazing accuracy.

As for the pilots, here their names are somewhat changed. However, racing fans will be able to guess who is who by the flags. For example, under the flag of Monaco, Charles Leclerc is hiding, and the Spaniard is the eminent Fernando Alonso.

Of course, Monoposto would be an inferior game if there were not a lot of car customization. Your goal is to take care of the perfection and modernization of the car, adjust the streamlining, select an inexpensive, but the best possible unit. Don’t forget about spare tires. An engineering team is not so easy, it is important to be able to manage finances.

The second important point is the attraction of wealthy investors who are ready to invest in the modernization of cars and the improvement of the work of the team, equipment. Don’t forget about pit stops. Choose a strategy with two or three stops to gain valuable seconds and outrun the competition.

The visual component is one of the main advantages of Monoposto. “Live” design, realistic physics, atmospheric soundtrack and excitement of rivalry – all this takes you to the virtual universe of Formula 1. The control system in the game includes a virtual joystick in the lower left part of the screen. It imitates the steering wheel, and allows you to turn the car.

Gameplay of Monoposto is greatly simplified, you should not expect many hours of races. On the contrary, the developers decided to make the focus on short races in the duel format. Players participate in a 1v1 race, while the opponent selection bases on the rating. This made it possible to form some social instruments, such as various records and achievements. In addition to human players, computer opponents always participate in the race.

There is no point in competing with them – they are just decorations designed to make the race more realistic. Computer rivals in Monoposto play the role of a kind, but dangerous extras. Gamers have to think more carefully about their maneuvers, moving close to them. In addition, in the event of an accident, the player will lose a lot of speed, which will instantly lead to lagging behind the opponent.

You can practice before the races. The player will be able to select the free ride mode. It has the ability to define the type of race, track and number of laps. Thus, it is easy to prepare for a certain race. It is worth considering that participation in a free race does not increase the rating.

Monoposto is an interesting Formula 1 game. The main feature is excellent graphics, which many computer games can envy. Go to the start and finish first.