Monster Legends by Social Point is a strategy game with elements of a virtual pet simulator where the user will be engaged in breeding monsters. You have to breed different types of fairy monsters, cross them, develop infrastructure in order to feed and upgrade them for various quests and battles in the arena.

The more often you feed a certain monster, the faster it upgrades. At the same time, monster changes not only externally, as it receives additional skills and abilities. Develop your base, get new resources, expand your zone of influence and try to get as many rare monsters as possible. Later you can play with them in the arena, as well as participate in the race for valuable prizes. By the way, if you love stories about creatures and dragons, then we recommend you an interesting arcade game Hungry Dragon.

Monster Legends has over 50 million download in Google Play. Read on to find out about the main features of the game.

Monster Legends will delight the user with a casual gameplay that anyone, even the smallest, can handle. At the very beginning of the game, you find a little tutorial that can allow you to deal with the nuances of the process of breeding monsters, after which everything becomes clear. 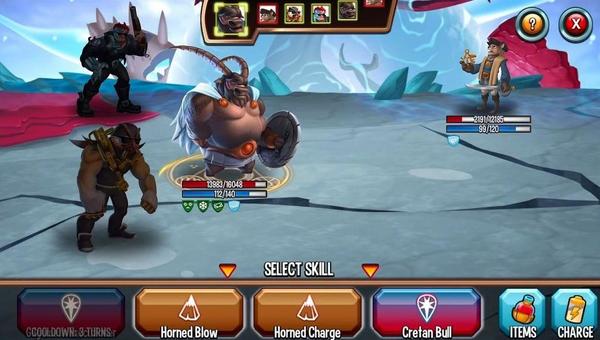 Expand your collection of monsters

Now, there are more than seven hundred different types of monsters in Monster Legends, and their number is constantly growing. Challenge the game and collect them all! Complete tasks and get new heroes or breed new species by crossing different monsters with each other. It’s interesting and exciting.

Set up a cozy base for your pets

In order to make your animals comfortable to live with you, you have to constantly develop your own land, build new enclosures and farms for food production. Don’t forget to feed the monsters. You can give a name to any animal, and then personally monitor its nutrition and watch the growth.

Gather your team of monsters and their assistants and challenge the danger. Explore the wandering map, complete tasks, and then take part in a tournament where you have only a few minutes to make the right decision. If successful, great rewards await you.

For those of you who love battles with friends or other players, the developers of Monster Legends offer a fun multiplayer mode. Go into multiplayer and fight other people to climb to the top of the leaderboard. Join groups with other monster owners and take part in a team battle for exclusive rewards. Climb to the top league in colorful PvP battles, destroying everyone in your path. 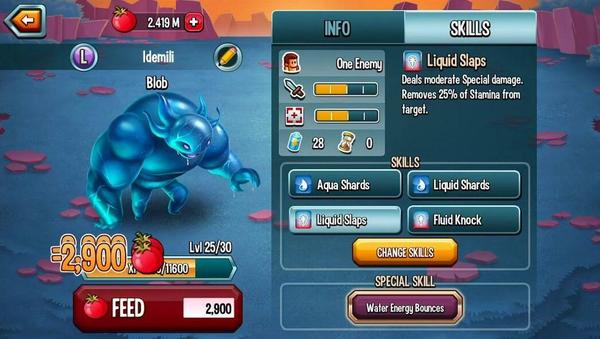 The game has “cartoon” style, all models have amazing animation and the environment is excellently detailed. Despite more than 700 types of monsters, each of them has its own distinctive appearance. The developers have tried to make all the monsters authentic and different from each other. During the game, you can hear pleasant soundtracks, while monsters make funny sounds.

Monster Legends is free to play, but in order to get the most out of your playthrough, we offer you a modified version of the game that will allow you to finish all levels to a maximum of three stars. Thus, you can always receive the maximum number of bonuses for passing, which makes the gameplay even more enjoyable for you.

We tested Monster Legends for our website visitors on android devices. Based on the results, we guarantee the correct and safe operation of the mod. By installing the modification, you can take advantage of all its benefits, receiving three stars for completing each level.

Upon your first entry, you meet “Monster Lord”. He can teach you how to breed pets, shows you the basics of building and growing food for monsters. From his words, it is clear that there are many of such breeders. Each of them has its own modest corner – a kind of base that you need to develop. There is no plot in the game, as well as a specific goal for passing the game. You receive assignments and choose what to do for the rest of time. 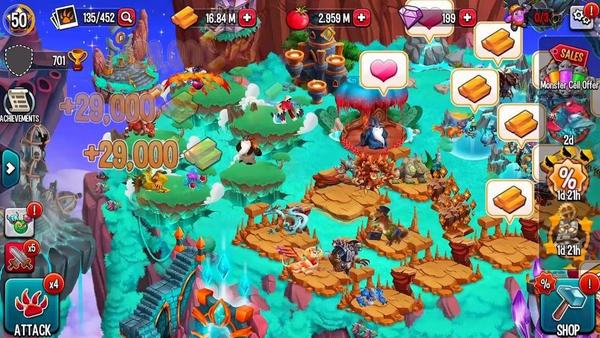 Monster Legends combines elements of classic economic strategy game with a virtual pet simulator. The gameplay focuses on idea of ​​constantly growing and upgrading new monsters. You get eggs, incubate them in a special tool, and then place the pet in its aviary. Depending on which monster you got, the type of its personal hideout also varies. Fire lizards prefer a lava landscape, but a tree monster needs a clearing in the middle of a dense forest. It is necessary to build each aviary separately, if you do not have free lairs, the monster will remain in the incubator. In addition, the game has buildings for the production of food and other materials.

The more often you feed a certain monster, the faster you can upgrade it to unlock additional skills and abilities. This will be useful to you later, when you can take part in arena battles. Monster Legends has a function that allows you to cross two types of monsters to get the third subspecies.

The monsters of the game are not alike and always have distinctive characteristics and eye-catching appearance, which makes them unique. Due to the large-scale differences, the gamer can meet many rare mystical creatures: terrifying golems, majestic dragons, three-headed Cerberus, huge rabbits and so on. Regardless of the pre-selected character class, there are some basic parameters to improve – endurance, speed, power, health. Players also have the opportunity to increase their income level.

Monster Legends is perfect for a calm, easy and non-intense passage. Here you don’t need to stubbornly knock out resources and sit for hours trying to knock out the desired monster. The gameplay is very smooth. First, you build, then upgrade pets, and in the end you fight other players.

How to install Monster Legends Mod?

Don’t forget to delete the original version of Monster Legends before installing our modified version to prevent errors during installation process.