Moon Pioneer is an arcade game from the famous developers VOODOO. This is not a space simulator, but just a casual time killer where you have to guide an astronaut to pick up barrels of fuel. Then build mini-factories in special places. However, they need energy to work obtained through the physical activity of other crewmembers, solar panels, etc. After that, refuel a huge rocket and go to conquer new worlds. Each time it will be more and more difficult to achieve the set task. However, it is not difficult, as it just takes more time. The game in question focuses on killing time, with which it does an excellent job. If you love arcade games, then check out Helicopter Escape 3D and Evil Nun Maze.

Moon Pioneer was released a week ago, but over one million people have already tested the app. The game has 4 points rating. Users generally approve of the game’s concept, but complain about the overwhelming amount of advertising. 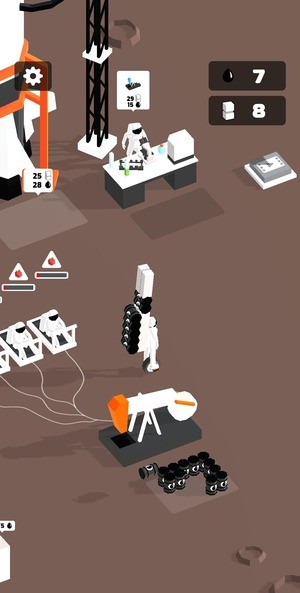 User plays as an astronaut in Moon Pioneer. His main task is to explore various planets and their satellites in order to establish mining there. Start with the Moon, continue with Mars and move on to its moons Phobos and Deimos. Continue your exploration and get to Jupiter, Saturn and the most distant parts of our universe. Upgrade your portable base and do everything to launch a rocket into space and continue your adventure. The conditions of the game will change depending on your location, but the main goal is always the same – to launch a rocket.

After landing on the planet, you have only one astronaut and several barrels of oil nearby. It is necessary to build an oil production tower with the help of these barrels, which can bring you minerals at regular intervals. Next, continue to upgrade your base. Hire a few more astronauts – they will pedal, thereby generating energy for faster operation of the oilrig. Collect oil and take it to the refining center in Moon Pioneer. There you will receive minerals instead of oil. The ultimate goal of the user is to collect enough oil and minerals for the rocket to travel into space. How you will achieve this task is only your concern. The game is non-linear, so there are several ways to deal with the task.

Build unique buildings at your base

After erection of the main set of buildings, you need to think about how to automate the production and make it more productive. Build a greenhouse that will bear fruit. At first glance, this may seem like a worthless investment, but over time, your astronauts stop pedaling without apples. This is where the greenhouse comes in handy. Another interesting solution is to contact a vehicle builder. The fact is that your hero walks on foot, and this is very slow and long. 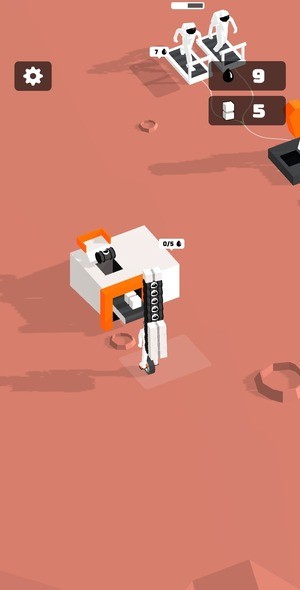 To speed up the process, you can order a monowheel from your companion and move around the planets faster. However, this improvement also requires oil and minerals. Here you have to choose – spend resources on transport to make life easier in the future or not to waste time on this, but rather to go to the next location. By the way, the same scheme works with the main buildings. For example, you can raise the level of an oilrig and an oil refinery, but this also requires a significant amount of resources and time. It is not necessary to do this. There is an opportunity to immediately go to the next level.

Moon Pioneer meets the user with a top view and unassuming graphics. There is no sound in the application at all. However, it would be strange to expect any delights from the project, since the VOODOO studio has always been famous for its timekillers. All the emphasis is on the gameplay, but not on the graphics.

Moon Pioneer can surprise the user with a huge amount of advertisements. Commercials, without exaggeration, appear here every minute, which, of course, can infuriate even the most undemanding user. To solve this problem, you can download a project mod with all ads removed. You can also get bonuses for watching ads without wasting time researching videos. 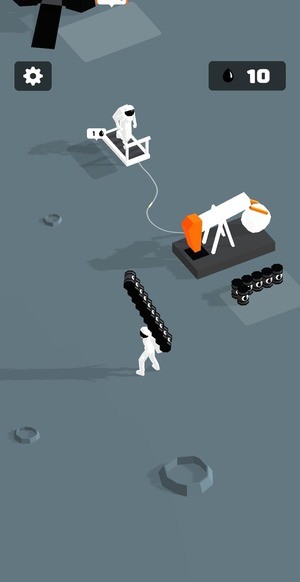 Already quite a few studios on the Play Market have gained fame thanks to the release of various timekillers. VOODOO is one of such developers. This studio is distinguished from the background of its competitors by the craving for creating a fundamentally new gameplay. It becomes a model for all new projects. The aforementioned developer has never copied the works of other studios, as developers used to setting trends for everyone else. It is unlikely that you have previously met such a game about the development of distant planets. Here everything comes down to your ability to make decisions in time, observe timing and planning for the near future.

If the mining process has slowed down, then sometimes another astronaut appears with bonus minerals. Obtain them for watching the video. Then these fossils will appear in the center of the map, and you can drive up and pick them up gradually. We have to say that the hero cannot carry an unlimited amount of minerals in his backpack. Initially, your supply is 10 units of fossils and then it is possible expand it to 15, 20 and so on. Do it with the same unit from which you can get transport.

Construct new buildings, research technologies and speed up the process of automating resource replenishment. Launch your rockets into space, explore the solar system and progress through the levels. Moon Pioneer will help you spend a few hours of your time pleasantly and with interest.

Moon Pioneer is an entertaining time killer that will appeal to all fans of the genre. You have to go into space and do the exploration of nearby planets.