Mortal Kombat is another part of the famous fighting game series. In fact, this is still the same game as ten or fifteen years ago. The project has absorbed many new features and once again updated the combat mechanics. MKX remains the same fun fighting game that delays from the first seconds and doesn’t require deep knowledge from the player. However, the external simplicity is fraught with many nuances as in the case with the previous parts. Mortal Kombat is very easy to start playing, but extremely difficult to master all the mechanics and controls. Try it yourself and you won’t be able to stop. For fans of fighting games, we also recommend Injustice: Gods Among Us and Warriors of the Universe.

Read on and learn about the project’s advantages from our in-depth review.

The list of game modes has expanded in comparison with the previous parts. Developers added so-called “towers” to the standard one-on-one and online battles. Towers represent sets of tests with specified conditions. Moreover, you need to choose faction to represent on first launch of the game. The appearance of start screen and additional set of fatalities directly depend on this choice. For each victory, you get faction points that raise your team in the overall standings. Mortal Kombat also has updated Krypt mode. If earlier it was an ordinary cemetery, now it is a full-fledged first-person adventure with items, traps and enemies. 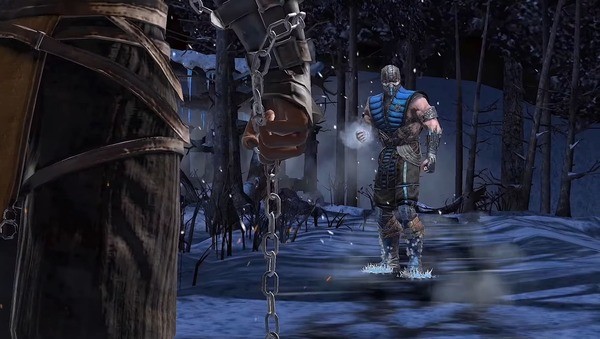 The developers have once again slightly modified the combat mechanics. Now each fighter has three fighting styles, which determine the set of super attacks and character appearance. Something similar happened in previous parts of the series. However, if earlier it was possible to switch between styles during the fight, now you need to choose one of three options before the battle. For example, Cassie Cage in Mortal Kombat can use small arms, aerial attacks or grabs and throws in different variations. Now the heroes not only run across the battlefield, splattering everything with blood, but also actively use objects scattered around the arena. Players can use everything that comes to hand – from barrels and sticks to old women passing by. The set of fighters has changed significantly since the previous game. Developers removed some characters from the main set, and added children of old characters and fighters instead.

High bloodiness of the game

Mortal Kombat as a fighting game still has an extremely high level of violence. The characters here fight with demonstrative cruelty. Who hasn’t enjoyed the gallons of pixelated blood gushing from bodies of defeated enemies? Did you try to reproduce a learned keyboard shortcut to make a fatality? The tenth part of the series still faithful to the canons. The fights are still brutal, while the final combinations (fatality and brutality) are extremely disgusting. During the fight, you can see dozens of broken skulls, spines, pierced through eye sockets that still allow continuing the fight. Now you can perform techniques illuminated by X-rays after filling a special scale. 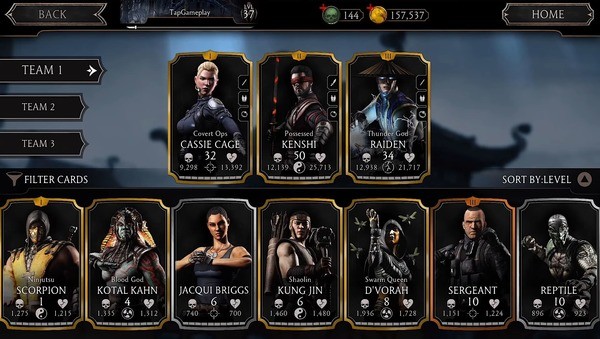 The graphic component of the game has an excellent level. Realistic movements and animations, colorful locations, the highest level of detail – all this is present in Mortal Kombat. Absolutely every character is like the real one. Developers tried their best to provide players with skillfully drawn fighters. In-game sound is also excellent – all hits, shouts and music fit perfectly into the atmosphere of bloody battles.

Our mod allows you to disable attack and blocks of the enemy, as well as inflict more damage on him. In addition, you can use skills with no cooldown. 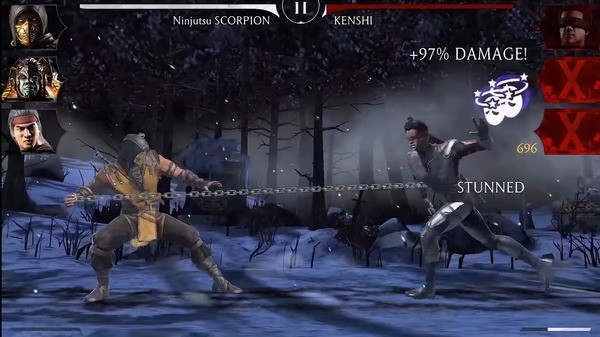 We confirm availability of mod menu in Mortal Kombat. Just click on the icon in upper left corner of the screen to open it. There you can select the desired function by activating special slider. If you get bored, then you can turn off the cheats and continue playing as usual. Our installation file has no viruses, as it is completely safe. Moreover, its use cannot degrade the overall performance of the game.

Mortal Kombat allows each character to use three fighting styles. It is necessary to choose a set of bonus skills for warrior before the fight start. However, this does not give anything significant – the character only gets a couple of new skills. For example, Sub-Zero in Grand Master mode can create his own frozen clone and throw it at the enemy. In addition, impenetrable style allows him to cast a protective aura and expose shields. We should mention that your choice can affect the battle tactics, but it cannot change its mechanics. 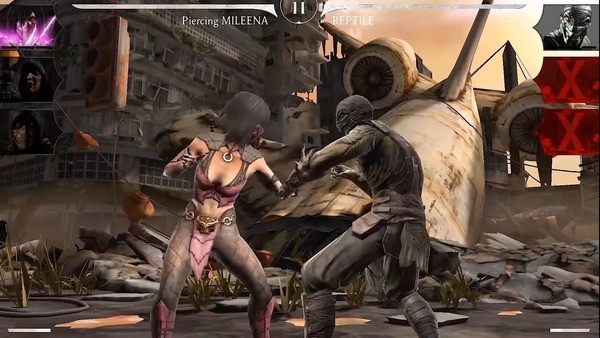 Another innovation in Mortal Kombat is a new approach to arena design. Something is always happening against the background of main action: people are wandering, fighting or looking at battle with fascination. All this in total creates the illusion of a lively area. You can interact with some items on the battlefield. Throwing a stone at the enemy, flying through arena on a liana, hitting with a log – now these techniques represent a great part of updated gameplay.

Mortal Kombat fulfills the main goal – to please the user. This is a true classic of the genre, and fans of fighting games simply have no right to pass by this project.

How to Install Mortal Kombat Mod?

Don’t forget to delete the original version of Mortal Kombat before installing our modified version to prevent errors during installation process.