Mount and Magic is a fun casual game that puts you in the role of a wizard fighting against a powerful dark entity. According to the plot, a destructive force that threatens the whole world appeared because of the thoughtless use of magic during the war. The spirit living in nature could not withstand such a load and turned into a demon from the remnants of magical power. Now it began to devour all living things! You have to try to stop this gradually destructive force, which behaves unpredictably and chaotically. Using your energy magic, destroy the dark clots chasing you. They will continually try to surround you, but avoid them at all costs. Constantly dodge them and make your way. If you love casual games, then download also Stick War: Hero Tower Defense and Age of Railways: Train Tycoon.

If you want to know more about Mount and Magic, then read our review. 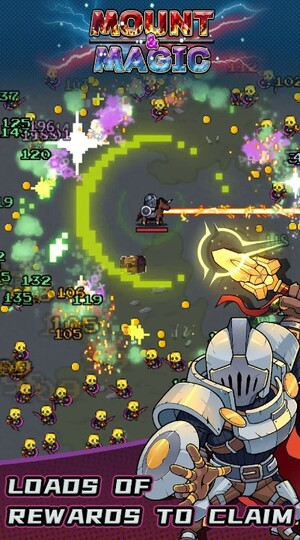 The plot of Mount and Magic tells the story of many years of war between wizards. Their battles do not pass without a trace, as the earth is not able to withstand such a force and absorbs all the most terrible. Animals began to turn into monsters, while evil spirits appeared, devouring everything in their path. You have to take the side of the once dark magicians and help them in the destruction of the evil creatures that they also gave birth.

Controlling a magician, you need to deal with whole hordes of bloodthirsty zombies, giant spiders, skeletons, evil spirits and other creatures. These purposes require fireballs, lightning bolts and a number of other spells.

In addition, you can use the power of the elements to massively wash them off with waves of water. Destroy them with a meteor shower, or ignite them with lightning. You will watch what is happening from a top view. Control the character with one finger, indicating the direction of movement. 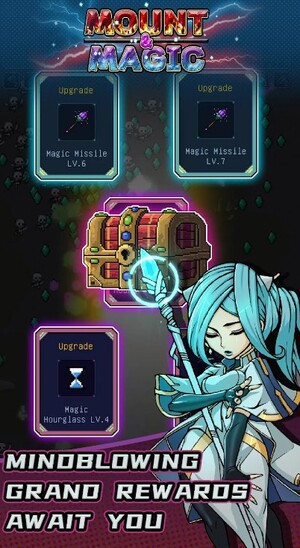 The controls in Mount and Magic are simple. You just need to move around the map with the joystick, as the character attacks opponents on his own. With each stage, the difficulty of passing increases, there will be more and more enemies and powerful clots of dark energy. In return, you will be able to upgrade your hero by learning new and increasingly powerful spells! The meaning of what is happening is to hold out as long as possible, setting one record after another.

The graphics in Mount and Magic are simplified as much as possible and resemble retro projects. All characters have a form of silhouettes, while the locations where the battles take place are devoid of relief and are one plane.

We suggest you download Mount and Magic mod APK, which will give you the opportunity to make free purchases. 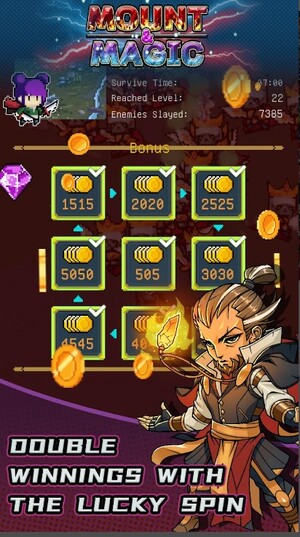 Wizards have used too much destructive magic over decades of brutal war, and now the spirit that lives in nature becomes a demon from the remnants of the magic penetrating it and devours all living beings. You have to single-handedly destroy the creatures that appear from different sides, while one finger is enough to guide the character, and he will shoot on his own.

By killing enemies, you level up his level and three new abilities to choose from become available. For example, an ice storm, a fireball, a magic circle, and more. Play Mount and Magic and set personal records in time, but remember that it will not be easy, because there are a lot of enemies, and your hero is only one. Of course, in terms of graphics, this game is not a masterpiece, but the gameplay here is incredibly addictive.

Mount and Magic is a simple casual survival game where you have to kill as many enemies as possible. Along the way, pump the hero and become stronger.