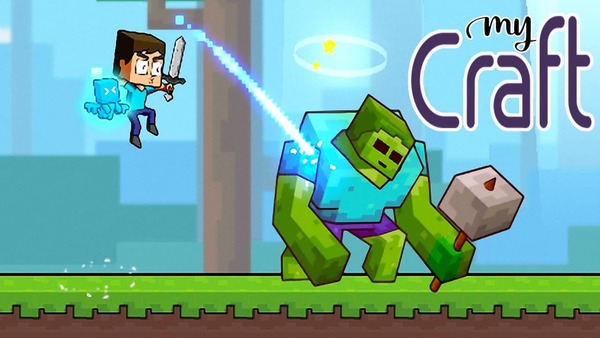 My Craft: Craft Adventure is a 2D platformer and action game in which you have to fight monsters and explore locations from the well-known Minecraft project. The gameplay is quite trivial and familiar: players go through linear levels, performing simple tasks. The plot is completely absent, as it’s just a journey through the levels. Main goal of any of the stages is to go through the location, destroy all opponents along the way and get to the transition point to the next level. The gameplay is reminiscent of Mario, with the only difference being that at the end there are dangerous bosses waiting for you to fight. Enjoy a successful combination of a spectacular combat system and locations that strongly resemble the worlds of Minecraft, presented in 2D. We have also prepared other interesting games for you, such as Basket Battle and Project Winter Mobile.

Read on to learn about all the features of this project.

As mentioned above, the main mode in My Craft: Craft Adventure is the story campaign, which will make the hero travel through various worlds. During the campaign, you collect coins and various rewards. Knock out enemies and dodge various traps. Please note that in order to collect all the coins on the level, you will have to go through it several times. In general, everything is quite standard. Move from left to right, jump over pits, collect coins and other bonuses, and beware of mobs. You can simply jump over them or kill them by throwing a heavy stone on them, for example.

As part of the passage of My Craft: Craft Adventure, you have to complete curious and unique tasks. Always your main goal will be a complete cleaning of the location from enemies. As you progress through the number of enemies, as well as their strength, will grow. You will also gradually get to know different types of enemies. All the local opponents came from the world of Minecraft, so you could already meet many of them.

Opponents here have their own unique abilities. Some enemies will freeze you, while others will explode if you get too close to them. Each enemy requires own approach. There are also bosses here, with whom you will rarely meet, but you will remember the battles with them for a long time.

As you progress through the levels, you will pump your hero. There is only one general parameter here, which is responsible for the combat capability of your character. With it, you will increase both the attack power of the hero and his survivability. You have to spend in-game currency for pumping, which you will receive as a reward for your success.

Also, buy skins for your fighter for this currency. Skins noticeably change the appearance of the hero. Among the skins, you can also find images of superheroes from popular comics.

To get an advantage during the adventure, download the My Craft: Craft Adventure mod APK for unlimited money and crystals.

The gameplay will surprise you with its dynamism and variety. Although the main character can only run and jump, but the variety of levels and the amazing work of the game designer will give you a sense of the depth and complexity of the gameplay.

When the level ends, the user will face the enemy face to face. Show your reaction and speed. The player has a special button that will allow the character to hit the boss. You can also roll a large stone on him or beat him with a sword, shoot with a pistol, and so on.

My Craft: Craft Adventure is a very exciting project about the adventure of a craft boy. Complete levels, kill bosses and get the best skins.