Mystic Messenger is an otome (visual novel or dating simulator) game for smartphones and tablets released by Korean company Cheritz. The essence of the game is as follows: you play the role of a young girl who communicates through a mysterious messenger. You assign a “nickname” to your character and start chatting! It is quite simple to play and this project is practically no different from other well-known games of a similar genre. However, it has one very important feature, namely the game interface. It very well mimics the interface of a real messenger for messaging. You ca communicate with your friends through social network clients. Here you will also conduct dialogues with your interlocutors, exchange messages that contain text, emoticons and other attributes of instant messengers and social networks. Get several options for replies to their messages. You must choose your answers deliberately and carefully, as they will determine the fate of your main character. We also recommend you to familiarize yourself with Hollywood Legends: Hidden Mystery and The Lonely Hacker.

Check out the review to have a complete understanding of Mystic Messenger.

The format of the game is unusual: you actually have a phone in your phone. Hence the name “Messenger”. That is, the whole gameplay boils down to the fact that you will correspond in chats with characters that appear at a strictly allotted time. Sometimes this is a one-on-one correspondence with someone, and sometimes – with several or with all the characters at the same time. It is a lot of fun: each of the characters has own communication style, characteristic behavior and individual animated stickers! Mystic Messenger has only two versions: English and Korean, but the language in the dialogues is not too complicated, so you can figure it out. 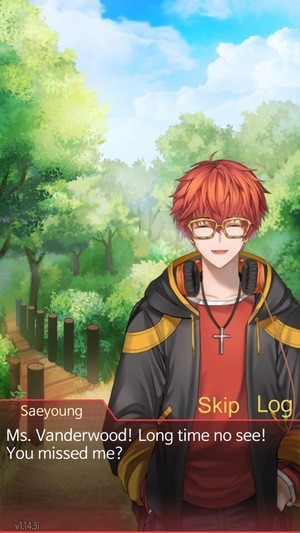 Make friends and fall in love

Since this is a dating simulator genre, the main task is to win over and fall in love with the character you like. Well, or all in turn. At some point in the game, the characters will say that you are now in charge of organizing their charity party and your immediate responsibility is to adjust the guest list. Actually, the gameplay consists of two parts. Invite as many guests to the party as possible and conclude the storyline with the selected character.

As soon as you start Mystic Messenger, you can choose a story. This is the starting point. Each Story has its own separate plot with the main character. Choose the character you like and the game begins.

Keep in mind: depending on the chosen storyline, the time you can spend in dialogues will differ. In Casual Story, for example, it will be 5-7 minutes at a time, and in Another Story – 15 minutes or more! A little more about chats: they appear strictly during the plot time of the game and depend on the selected character. For example, the character Zen is an owl, so he is reluctant to enter chats in the morning and afternoon, but he will be more active in the evening or at night. On the contrary, student Yooson will start writing at eight in the morning, because then he will leave for class and will be busy.

The game features five main and two bonus characters. Each of them has its own character, characteristics, manner of speech, writing and views of the world. Get additional Interest in Mystic Messenger by the quest to unravel the character you like. After all, in order to fall in love with someone, you first need to understand him. As with all dating sim games, each character here is a personification of one of the most common people you meet in real life. A nerd, a joker, a very self-confident person or a gamer. 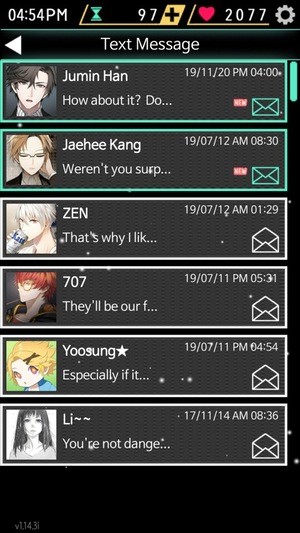 During the dialogues, the chosen answers will influence the character’s attitude towards you. The more answers the character likes, the higher the chance that you will get a story with him.

The graphics of Mystic Messenger are the same as in the comics, manga and anime. This is a kind of mixture of Japanese cartoons and comics that fans of the genre will love, but may also alienate some gamers.

Download the Mystic Messenger Mod to get unlimited hearts and hourglass.

Select the [+] icon next to the hourglasses amount at top of the game screen, then select the exchange 100 Hearts -> 1 Hourglass and you’ll instead get 100 Hearts and 100 Hourglasses!

In addition to interesting and atypical plot, which each of the characters has its own, there are chips that make you forget for a while that all this is a game, not reality. For example, the hero’s sympathy for the user will be very noticeable. In chats, some of them will increasingly talk about you or only with you. They shower with compliments, hearts and a desire to meet in reality. In addition, they call and write SMS.

The game also has plot forks and turning points that you cannot always complete the first time. If you think it is simple, then it is not. Each character has a good ending, several normal endings, and 5 to 7 bad endings in Mystic Messenger. Moreover, we add the number of guests that you will eventually be able to invite. If there are not enough of them, then this is also a bad ending. 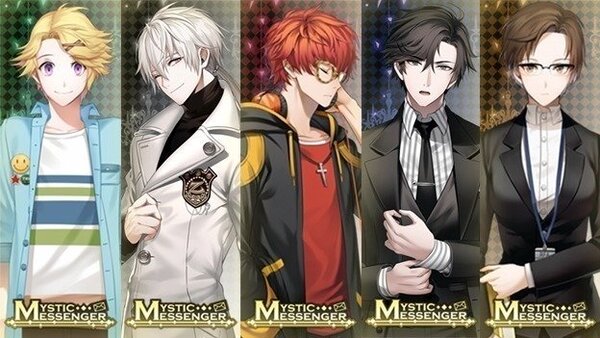 We think the coolest thing about Mystic Messenger is that the characters themselves take an interest in the user. That is, one of them will definitely write or call you after Chat Room. Each of the heroes has his own voice! It is extremely difficult not to succumb to the emotional mood of the caller, be it sad or cheerful.

Mystic Messenger has deliberately chosen this storytelling tactics so that you can become attached to the character and imbued with your relationship. Moreover, the characters are far from always doing well in the plot. The game makes you nervous and worried about the binary code as a real person.

If you feel lonely or just want to try something different, then download Mystic Messenger. You will definitely become friends with one of the characters.