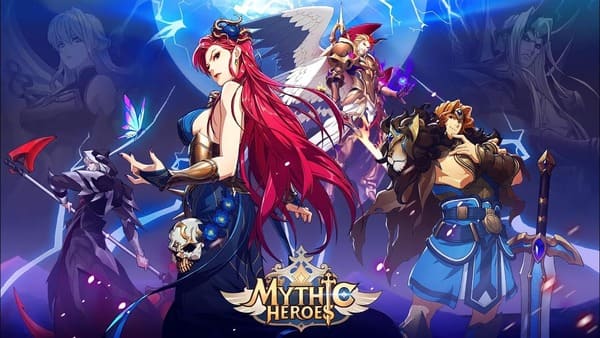 Mythic Heroes: Idle RPG is a role-playing game in which users have to go through many adventures with a team of experienced fighters, gradually unlocked as they progress. Turn based combat games are great for mobile gaming. Many of them even have automatic combat – although the characters already perform most of the actions on their own. On the shoulders of the players lies only the pumping of heroes and the selection of team members before the battles. A distinctive feature is quite stylish cartoon graphics – designers and artists have done a very good job. There are also many different characters, which even invented some characters. If you like adventure games for Android, don’t forget to download Caves Roguelike and Good Knight Story. 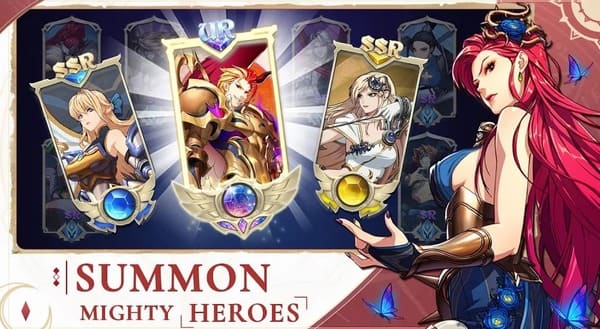 Mythic Heroes has more than 500 thousand downloads, while average score of the project on the Play Market is 4.7.

Choose the right strategy for the fight

The first missions of Mythic Heroes are quite simple and educational in nature. Initially, the team consists of three heroes, but gradually you will be able to open new ones. At the same time, only five participate in the mission, but you can change the composition before each battle. Thus, it is easy to come up with various combinations and the most effective combinations. Each fighter accumulates a powerful attack that you activate yourself (if there is no auto-battle). Learn to combine units to achieve maximum effect in defense and attack of the enemy. Your troops must be cohesive and act as a single organism.

There is a reward in the form of experience, currency and other items for the victory. Sometimes armor comes across that should be equipped on your fighters. In addition, do not forget to level up the hero so that his strength is always enough to defeat the enemy. Do not forget to collect rewards for completing tasks in a special tab, as well as rewards for various seasonal events.

Play the way you want

The gameplay of Mythic Heroes itself is not very different from other popular RPG games. Process of battles takes place without the user. As we have already said, you have a team of three characters with whom you go to your first training battle. It goes like this. Your soldiers automatically fight with the opposing team, while you can only activate a special attack of one or another player at a boring moment. You can make your task even easier by turning on the full auto-battle. In this case, the super attacks will activate themselves as you reload.

If you get tired of it, it doesn’t matter – the game has a function to speed up the battle. True, to unlock it you = have to reach the third level, but it is not so difficult. It will be possible not to waste time on battles, but to focus on important things – collecting rewards from chests and completing daily tasks, as well as pumping characters. 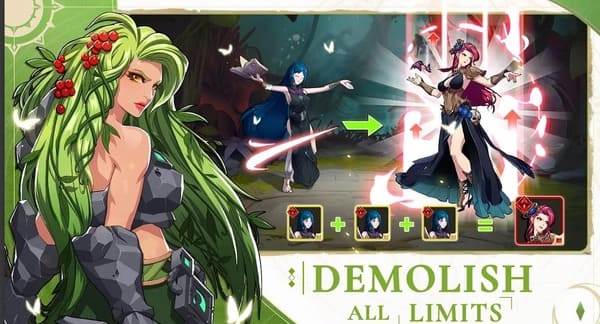 Take your guild to the top

Each new user at the beginning of Mythic Heroes has a choice – whether to join a guild or create his own. Of course, you can do without a clan at all, but this will significantly complicate the gameplay, making it just more boring. Do you want to get an edge over your opponent? Be sure to use faction bonuses. Make new friends and allies from all over the world right during the game.

As you already understood, the chances of winning are zero without new heroes. It is worth visiting the tavern from time to time and recruiting new heroes for your army. True, they are not ready to fight for nothing. You can buy character services for crystals, ingots or hearts. These strong units differ both in abilities and in class features. For example, you can use magicians, shooters, assassins, knights and strongmen to break through the enemy’s defenses. The more victories you win, the stronger your guild will be, thanks to which its members will receive more bonuses.

Mythic Heroes has wonderful cartoony graphics and smooth animations, along with special skills. The game will appeal to those who appreciate good graphics, while the project is not particularly demanding on the media, allowing almost everyone to play it.

To defeat all enemies, you need to recruit the right team of heroes and use their skills correctly. However, even this may not be enough. Therefore, we suggest you download Mythic Heroes mod with a special menu where you can adjust attack rates of your heroes, as well as enable god mode. In addition, we removed all ads from the app.

Characters in Mythic Heroes are card characters. There are more than a hundred of them. The characters form the basis of the game. They belong to different factions, sorted by class and rarity. The set of experience is simple. It goes for battles in the arena with gameplay in the main storyline. To move to a new stage, a special essence of the hero is required. 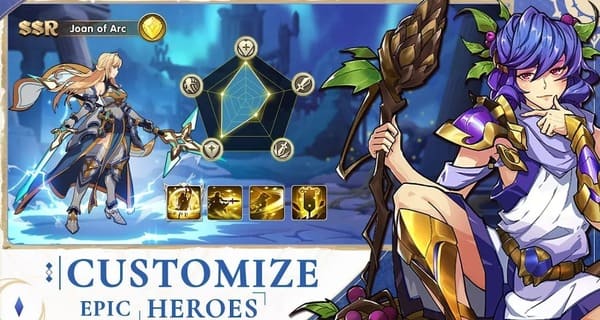 After raising the level, you can improve characteristics and abilities. Development uses special crystals placed in slots. The storyline consists of successive blocks of missions. You cannot replay them. The map shows individual points of passage, displays avatars of friends. Tasks lead through the usual levels, to fights with bosses.

The social component – the clan system, the list of friends, is presented in a truncated (compared to other projects) form. Use friends to get hearts for buying heroic sets in the game store. In addition, create alliances with such players in the dungeon, receiving bonuses. The more pumped the character of the friend who accepted the union, the more significant the bonus. Nevertheless, the chat is very happy! In addition to text, you can send pictures, voice messages to it.

All fans of the genre will definitely like Mythic Heroes. It will be comfortable for both experienced users and beginners. Moreover, the training system in the game is quite detailed.