Nameless Origin is an action app from Powersource studio. Try to survive in the conditions of the apocalypse and defeat all enemies. The main task of the user in this application is to go through level after level, shooting enemies with weapons. Do not forget to use the features of the local landscape to dodge enemy attacks and inflict as much damage on them as possible. Unlock new heroes, improve their properties and choose one of three skills for pumping. Fight powerful bosses, win and gain glory. To make it easier for the user, each hero has a powerful ultimate skill that you can use once per battle. Explore the project completely and go through all the exciting levels to get the most out of it. We also recommend checking out Worldbox, Rogue Land and Hunt Royale.

The project has over a hundred thousand downloads, although it became available on the Play Market just a month ago.

One of the main features of Nameless Origin is the wide variety of bosses that you must overcome during your adventure. The leaders differ in the amount of vital energy, skills and other features. Before the campaign, you must go through a tutorial and fight with the first “introductory” boss. He has a huge number of lives, as well as different attacks. Because of this, the user must constantly change the tactics and strategy of the battle. It would be wiser to approach some of them, while others should run away and constantly maneuver so as not to fall under heavy fire. Bosses usually wait for the player after a number of normal levels, so you should be extremely careful not to lose concentration.

As in many similar games, Nameless Origin implements a character leveling system based on the choice of one of three effects. When a character gains a certain amount of experience, the application prompts the player to choose one of three skills. You can increase the chance of a critical strike, number of lives of your hero, get a chance to kill an enemy with one attack, increase your defense and much more. Please note that your hero does not heal on his own, so if you have lost many lives, it makes sense to restore your energy first. In addition, there are special altars in some locations, near which you can replenish lives, but they are not so common.

Many characters available for research

At the very beginning, every player of Nameless Origin has only two heroes at his disposal. This is a brave girl and a brave boy. They have similar offensive skills, but with some differences. First, this powerful skill you can use occasionally. You can activate it only at the moment when you collect a sufficient number of skill points given for killing enemies on the map. For example, a girl has a powerful aura that gives her temporary invulnerability. Other characters have unique skills. Someone is able to punch through walls, while another character receives healing for a short time. Over time, you will be able to unlock more and more heroes. It is possible to upgrade them for in-game currency. Find it during battles, as it drops from monsters.

Nameless Origin has a top view, while the user immediately sees the entire location. This allows him to come up with his own strategy for a specific level and calculate all the risks. The effects of attacks and special skills are very colorful. Warlike music sounds during the gameplay and each hero has his own unique battle cry.

It can be quite difficult to complete some Nameless Origin moments, because your enemies are awake and attack in response. To cope with them, you need to be very maneuverable and mobile. However, if you have very big difficulties, you can use a mod that we offer for download. It freezes enemies, making them immobile and gives you access to No Cooldown feature. No Skill CD allows you to use the hero’s special skill without interruption.

After launching Nameless Origin, you will see a mod menu in the upper left corner of the screen. To activate the mod, you need to move the slider to the correct position. You can enable one of the two functions or both at once. At any time during the game, it is possible to turn mod off. Therefore, it can help in the passage of especially difficult moments, but if you want to continue to play honestly, then just turn it off after overcoming the obstacle. Don’t worry, the mod does not pose any danger to your device, because it has been tested by our experts. 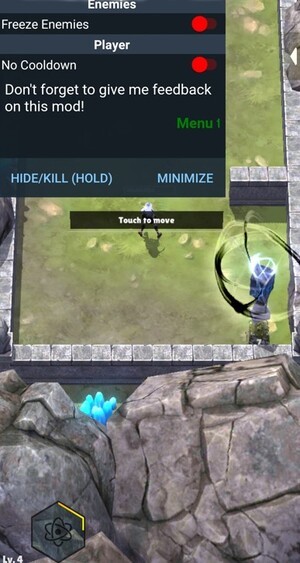 During the gameplay, the player will meet a large variety of monsters. There are plants that spit poison, and powerful robots that can chase you. What can we say about the epic bosses, which are the main feature of the game? It is also worth noting the locations that differ from each other. Many of them have brick barriers. They do not allow you to hit the mobs directly from anywhere in the location and give you a chance to hide. In general, the maps are feature different settings, but you need to go through several levels to learn more about this.

The application has translation into two dozen languages, but the localization in many of them leaves much to be desired. Therefore, we advise you to play in the original – in English. The game also does not have any age restrictions, which allows absolutely anyone who wants to play it.

Nameless Origin is an interesting and promising project that does not require donation. Have a great time in this application, so we recommend downloading it with the mod right now.