NBA Ball Stars is a basketball arcade game published by Netmarble US, Inc. The project became the debut work of the developers. You have to make accurate throws, use skills of basketball players and solve puzzles. Quests are somewhat similar to the famous match-3 puzzles, but still different from them. You need to find stones of the same color. If you do everything correctly, then your basketball player increases the chance of hitting the ring or successfully defending his lines. Train your team, acquire stronger athletes and create an unbeatable squad. Complete the entire regular season, advance to the playoffs and win the season. We also recommend Basketball Arena and NBA 2K20.

NBA Ball Stars project was released on April 6, 2021. In just a week, more than 1 million Android users downloaded the game. Its average rating settled is 4.4 points based on 17 thousand reviews.

Assemble a collection of NBA stars

NBA Ball Stars features official license of teams and basketball players, so you can manage the real athletes the world knows. Giannis Antetokounmpo, James Harden, Steph Curry are just a few of the great basketball players who can help you to win games. At the same time, fans of realism in games will surely appreciate the fact that you have to play 82 matches to end the regular season – everything is like in real life. Only then will the playoffs begin. Don’t worry though, no one is forcing you to play four quarters in every match. The computer will modulate the outcome of the game, leaving you only a minute and a half at the end of each meeting. The score base on overall performance of your and opposing team. You need to either retain advantage for the remaining time or try to catch up with the enemy. 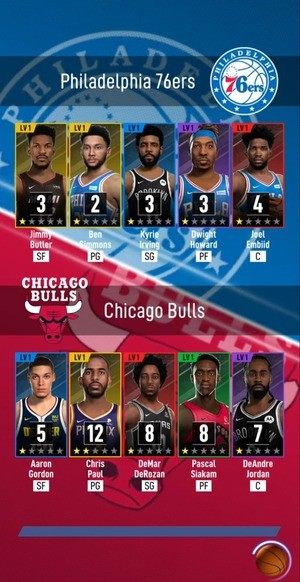 Get results in addicting puzzles

Gameplay screen in NBA Ball Stars is split in two parts. Above you see a playground, and below you can find a puzzle field. It is necessary to connect stones of the same color in it. Each basketball player has his own color, which is responsible for speed, throw accuracy, strength or other factor. Therefore, you need to collect stones of different colors in different cases. When you attack the ring, you have four moves to solve the puzzle. The more stones you use, the greater the chance that your player will hit the target. Ideally, you have to achieve a 100% chance to score points for sure. The situation is similar on defense. Here you need to lower your opponent’s chance of success. Likewise, it is best to reduce this chance to zero, because even 10% gives him a chance of hitting.

Use skills of your wards

Just throwing balls into the basket and defending would be boring. That is why the developers of NBA Ball Stars have introduced a system of special skills into the application. Absolutely every basketball player has his own advantage. Someone can accurately implement track throws, someone is strong in selection and someone can make a beautiful pass and make a slam-dunk. For example, when you are defending, it is not necessary to force the opponent to make a mistake. You can play ahead and just take the ball from him using a special skill. Players need points to activate the skill, so it is impossible to use them constantly. 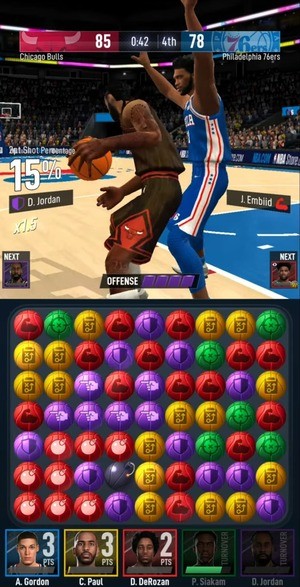 NBA Ball Stars offers beautiful 3D graphics that will satisfy the needs of the average players. All basketball players have their own unique model, so a basketball-savvy user will surely be able to tell one player from another. In addition, the game implements shouts of fans, ball sound on the parquet floor and many other sounds.

As we said before, every basketball player has a special skill that allows him to gain an advantage in one attack or another. However, you will not be able to use skills continuously, since it is necessary to collect balls of your player’s color. In order to avoid inconvenience, we bring to your attention a mod for unlimited skills in every attack. There, you can throw three-point shots every time, perform spectacular dunks or tackle.

We have tested NBA Ball Stars mod and can confirm its functionality. Now the icon with basketball player’s special skill will always be active, so you can use it for both attack and defense. Such an approach simplifies the gameplay and makes it more varied, because basketball players demonstrate new spectacular techniques. 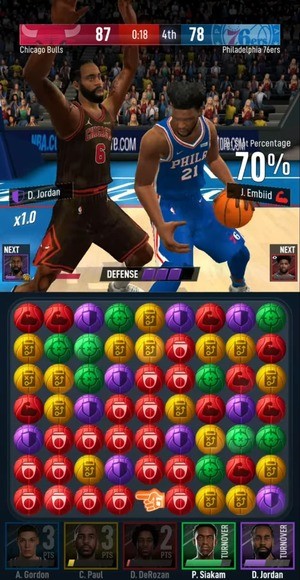 Complete a short tutorial and assemble a team by opening special packs. First, you open a pack with regular players. Their performance is often quite average. They form the core of you team. Then you need to open star pack with cool basketball player. He will lead your team forward and become a shining leader. It is possible to buy additional players and change the squad during the season.

Choose one of the existing league teams at the start of your adventure. Depending on your choice, you will play in one of the Conferences. Make playoffs after 82 games of the regular season, but still it is necessary to deserve the place there. You need to get into the top 8 teams of your Conference. The top two teams will play in the grand final and compete for the main trophy of the tournament.

By the way, there is an opportunity to play with real opponents in NBA Ball Stars. Challenge players in multiplayer, communicate with them and win. Enjoy this unique project and lead your team to success.

NBA Ball Stars offers users a new approach to basketball simulators. You need not only accuracy, but also logic. Assemble a great team, use the skills of athletes and hit the target.