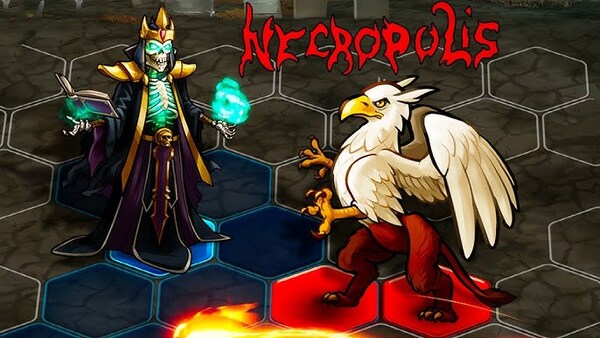 Necropolis Story of Lich is a game developed in the combat strategy genre. The gameplay is a kind of continuation of the famous game Heroes of Might and Magic. You also travel around the map on your horse along with the army and the hero. Along the way, you will meet a variety of enemies, as well as valuable resources and artifacts. The battles take place in turn-based mode. Your units go first, then the enemy units. There are both melee and ranged creatures, as well as mages. In total, there are several factions in the application, but the user by default plays for the Necropolis. Well, if you like strategy, then download also Transformers: Earth Wars Beta and Dragon Royale.

Heroes of Might and Magic is a legendary series that has long remained in the hearts of fans. Now you have the opportunity to play a kind of this game, but with its own characteristics.

As a turn-based strategy benchmark, Necropolis Story of Lich invites us to engage in comprehensive development and thorough research. Users have to develop their character, acquiring new and improving existing skills with increasing levels. At the same time, it is necessary to develop your own castle, which brings money, an army, teaches spells, and serves as protection from enemies during a siege. In the end, you need to explore the surrounding area, engaging in battles with monsters on the map, capturing mines, mines and sawmills, picking up artifacts, opening obelisks and so on.

Battles in Necropolis Story of Lich take place on a separate battlefield, creatures move in turn, like chess pieces. The hero himself does not participate in the battle directly, but influences the situation indirectly. Its characteristics like attack and defense strengthen the troops. When an army is destroyed, the hero automatically dies. Use magic once per round. Strengthen or speed up your creatures, inflict damage on opponents, scatter traps across the field, deliver a pinpoint lightning strike or cause Armageddon.

Of course, the strength of the army depends on the troops. If you only have skeletons, then it will be hard to win. However, if you enlist the support of necromancers, snipers or unicorns, then the strength of your army will increase many times over. You can hire creatures directly on the map or in cities.

Many units and heroes

Necropolis Story of Lich has multiple factions with unique aesthetics, tactics, and creature sets. Barbarians get the most powerful monsters faster than others get and can take the enemy by surprise. Necromancers turn dead enemies into skeletons and thus collect hordes of the undead. General gameplay principles are the same for everyone.

If you want to have no problems, download the Necropolis Story of Lich mod APK, which allows you to get free items without watching ads.

The player controls the so-called heroes, travels the world, develops cities and recruits troops. Main goal is to capture enemy territories and destroy computer-controlled heroes. There are several maps available in the game. Complete them in many ways, depending on the chosen city, tactics and hired heroes. Often players don’t try to come up with a new tactic and instead improve on an existing one. Even with this approach, the gameplay does not get boring, because with the same starting conditions, each game turns out to be unique.

You can understand the basics in a couple of hours. It will take a long time to master the strategy and tactical features of the factions, study spells and secondary skills. At the same time, the pleasure of the gameplay is easy to get at any level of immersion. Experienced players calculate every step, build supply chains and win by combining tactical tricks and non-obvious mechanics.

Necropolis Story of Lich is an exciting turn-based strategy game. There are fewer mechanics here than in the original Heroes of Might and Magic, but this game can also captivate all fans of the genre.