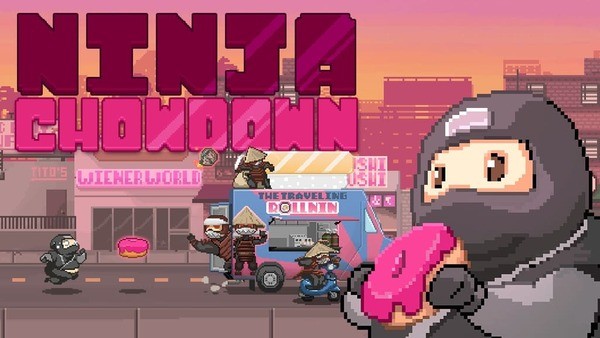 Ninja Chowdown is an unusual runner about the adventures of a fat ninja. The near future, the world is ruled by food, and the city is divided among factions that control food supplies. Only you, a fat donut lover dressed in a ninja costume, run out into the streets of the metropolis every night, stealing these sweets, dodging enemy traps, destroying enemies with sharp swords and gaining weight. More than 35 funny levels, various locations for passing and character personalization – this is only a small part of the entertainment in Donatsu’s interesting journey. He wishes to rise to the very top of the culinary chain and take first place in the leaderboard, beating out culinary bosses such as Pizza Pirates, Wandering Rollnins, Barvacars and many other dangerous and hungry pursuers. Touch the screen in time to jump or throw the shaken, taking your opponent out of the game with a well-aimed throw. Never stop, because donuts will not eat themselves. Also, download Bob’s World and Talking Tom: Gold Run 2.

Developers released Ninja Chowdown for Apple at the end of 2020, and it became available to Android users a few months later.

The plot of Ninja Chowdown follows a fat ninja named Donatsu who works in a donut dojo and trains in throwing shuriken and eating sweet donuts. They have a secret: a donut of knowledge that was stolen. Now Donatsu must take him away, but not everything is so simple.

To do this, you (or rather, Donuts) have to sweat and run, remembering all the training in throwing shuriken and dodging enemies in six worlds. Each world has several levels, which differ in a variety of enemies. There are three types of them for each world, and worlds from 4 to 6 repeat the first three, but they increase the number of enemies, which is why it is very difficult to overcome them, since your reaction is checked with a vengeance.

If the very first levels of Ninja Chowdown should not cause any particular difficulties, then the task becomes more difficult in the future. There are more and more enemies and your ninja’s running speed increases, which makes it harder to react. Enemies here are static and moving. There are also opponents that you can kill with a shuriken, while others only have to jump over.

Donuts will be scattered around the location, so the player has to jump to collect them constantly. Use them to accumulate in-game currency, as well as for the hero to use a special skill. When you collect a certain amount of this delicious food, Donatsu will become huge in size and will fly all over the screen, destroying enemies. Spend donuts on concentration and time dilation when throwing throwing weapons.

Customize the hero of your choice

As with many similar games, Ninja Chowdown has the ability to customize the character’s appearance and just make the ninja fun. The application has three parameters available for changing in appearance. These are weapons, clothing and a pet. Initially, Donatsu throws shurikens at enemies, which is generally logical. However, the developers of the application approached the game with humor and made it possible to equip the hero with funny and illogical types of weapons. For example, you can throw banknotes, hammers or milk cartons at enemies. The same applies to clothing. It is worth recalling that the character is quite fat, so any clothing looks comical on him. If you dress the hero in a lifebuoy or a clown costume, then what is happening will become even more funny. You can also take a faithful pet to help you, which will run next to you. This is a cat, dog, monkey and other animals. They play a purely cosmetic role, but they can brighten up your trip.

The graphics in the game are generally good, but at the same time monotonous: 13 types of enemies, 7 types of locations. While it is worth noting that Donatsu himself, his motion and emotion animations look very impressive. Sometimes he even feels sorry for him, because the donut always slips out of his hands.

Ninja Chowdown is free, but the user can turn off all ads for $ 4. There are many advertisements in the game, which significantly interferes with the gameplay. However, you cannot pay this money, but simply download a mod that removes all commercials from the project.

The controls in the game are simple: the left side of the screen is responsible for jumping, the right one for throwing shuriken. You need to watch carefully, because you have to throw them in all directions. Sometimes enemies throw bombs at you. In order to defuse them, you need to hit the object with a shuriken. At this point, the game slows down, making it easier to make an accurate shot. However, the character must have a certain number of donuts on the account for this.

The plot of Ninja Chowdown is rather banal. Somebody stole donut of knowledge from your donut shop, so the main character Donatsu must return it. To do this, you will chase the car of the kidnappers throughout all the levels. Those, in turn, will create many inconveniences for you. By the way, endless mode will open in which you will try to hold out as long as possible after completing the game. In this mode, it is possible to get into the leaderboards by gaining the most points for completing a certain level. Invite your friends to the app to make it more fun to play!

Ninja Chowdown is a simple yet fun runner. Enjoy nice graphics not oversaturated with different effects and contrast and easy and understandable gameplay. Try moderate hardcore, which is waiting for you in this project.