Ninja Hands is a casual game from the developers of Yso Corp. The protagonist of the project is an unnamed ninja who must defeat all the bandits, free beautiful girls and become a real savior. To do this, you have at your disposal several special abilities that allow you to defeat enemies at a distance. You can see only your hands, from which lightning, fire, ice and other elements appear. The whole application is divided into levels. Try to complete them all by unlocking all the skills and skins. Choose from many beautiful gloves and interact with the environment on the levels to get rid of your enemies easily. Use not only accuracy, but also ingenuity, because sometimes it is easier to destroy the enemy not directly, but deftly arranging his death with help of boxes or stones. We also advise you to download Match 3D: Matching Puzzle Game and Auto Defense.

Ninja Hands gained 1 million downloads in a short time. Check out our review to learn about all the project benefits.

Many different spells to destroy

The essence of Ninja Hands is to kill enemies and go through the story. Magic hands that can cast skills will help you to deal with the antagonists. Each skill has three levels – first, second and third. The skills themselves turned out to be quite diverse. Use a standard fireball or send a swarm of beetles at the enemy, which can kill him in few seconds. To activate a skill, you need to make a combination of three skills. It is also very important to direct your hands directly at the enemy, otherwise the attack will pass by and you will be in danger. If the enemy reaches you, the level will fail. Therefore, accuracy becomes one of the most important parameters for the player, because there may no longer be a second chance to attack.

Ninja Hands invites players to go through several dozen levels with hundreds of gangsters waiting for him. The first locations consist of one site with one enemy. They are very easy to pass, because even if you missed, then you always have one more or even several attempts. Things get more complicated in the future. New obstacles and objects appear on the levels. For example, several boxes of TNT. You can attack directly enemies or you can make it easier by directing your power to the boxes. As a result, a powerful explosion will thunder, destroying all life on the level.

Another example is a secret coin box. Destroying it brings you some money, but often such a box is located in an unobvious place and it is rather difficult to notice it. In addition, the application has locations with the release of hostages – beautiful girls. In this case, you cannot shoot the hostage, because then the level will be lost. Try to kill the terrorist and save the girl. Subsequently, the player will meet mechanics and locations that are even more diverse. All of them open as the adventure progresses.

Another interesting feature of Ninja Hands is the presence of colorful skins that allow you to make your character more individually expressed and vivid. Gloves are customizable, they can be of different colors or even become like Wolverine’s hands with sharp claws. Such changes do not have any effect on the gameplay, however, lightning or a pillar of fire from such gloves look much more impressive. Buy skins for coins, just as you can upgrade your skills. Well, it is necessary to earn coins during the passage of levels. 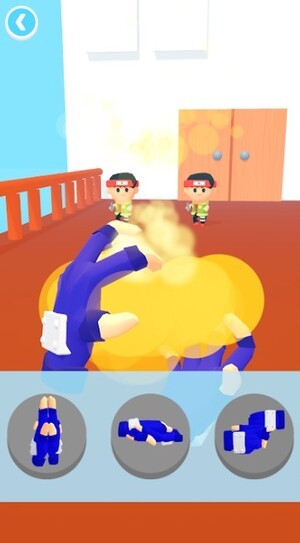 Ninja Hands has a simple graphics that minimizes the load on the processor of your android device. At the same time, the game has quite beautiful and effective animations. When your enemy is defeated, you will see how he literally explodes before our eyes. As for sound effects, the application cannot boast of it – there is practically no sound in the game.

Ninja Hands received mixed reviews on the Play Market. First of all, because of the large amount of advertising. To fix this problem, we suggest you download a mod that removes all ads from the game. In addition, it unlocks all the skins in the same mod and provides with unlimited coins. Therefore, you will be able to immediately pump all skills to the maximum and destroy enemies on the first try.

Ninja Hands is a classic time killer, which cannot offer the user any complex game mechanics, but it does an excellent job of its main purpose – user’s entertainment. The application contains several dozen levels with increasing difficulty. The gameplay surprises players not with its depth and sophistication, but with a colossal number of levels. Moreover, it is possible to complete each stage in less than one minute, which forces the player to start the next level. All this makes the game a great time killer, not letting you get bored while waiting for something. 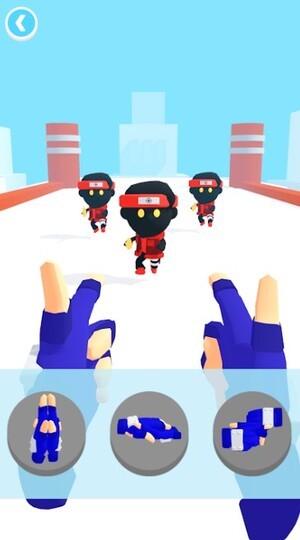 To complete each of the presented levels, you need to kill all the enemies. However, it is not as easy as it seems at first glance, because the enemies are not asleep. To kill them, as mentioned earlier, the player needs to use their skills and shoot accurately. The walkthrough will not bring any difficulty at the initial levels. However, over time, passing level after level, the difficulty will gradually increase. If you are unable to complete a level, you can replay it by trying to act differently. No energy or special points in the game can limit the player’s number of attempts to complete. You can go through the same level as much as you like.

Ninja Hands is a fun action game that lets you kill some free time. If you were looking for something similar, then we recommend that you familiarize yourself with this application.