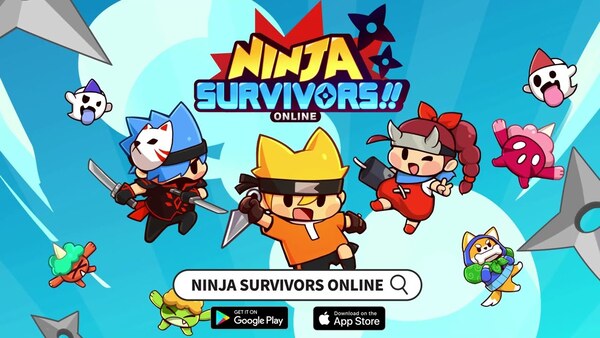 Ninja Survivors Online is an arcade game from Puzzle Monsters studio. Here is a roguelike where you have to try to survive. A crowd of enemies will constantly surround the main character. Your task is to kill them all or at least escape. The app has both single and multiplayer modes, so you can play alone or with friends. Choose your ninja and go to battle. Combine weapons and skills to get the strongest fighter. Team up with friends and win. Train and be successful! If you are into arcades, then download also Spinner Merge and Vampire Survivors.

Read our review for a complete immersion in the game. 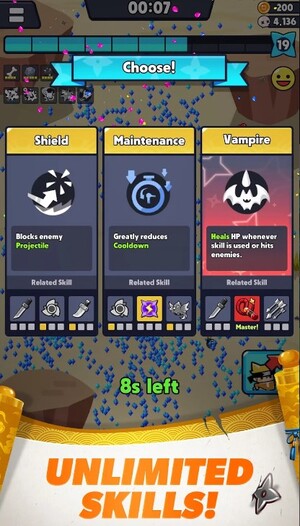 First, you need to decide what tactics you will follow and what kind of ninja you will have:

All three classes have an individual set of skills, passive bonuses, equipment and more. The gameplay is set up so that the three specializations here represent three different playstyles. That is why your choice should be deliberate, since you will not be able to change your specialization.

With skills and passive skills in Ninja Survivors Online, everything is quite transparent: a warrior destroys everything in his path, scattering hordes of enemies with a single swing. The assassin wields his blades with crazy speed, and the magician prefers to throw powerful spells at monsters. There are two types of skills: normal and superpowers.

You upgrade regular skills simply for books that will periodically fall from enemies as a reward for tasks. Use it for improvements in superpowers, so go to dungeons and get rare scrolls. You also can upgrade the player right in the course of battles, sometimes choosing one or another skill. 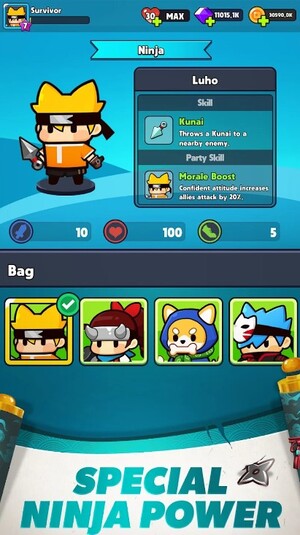 Ninja Survivors Online, like many similar games, has an exciting single player game. However, you will also find an online mode. Two alliances clash at once in a battle with the boss. The most interesting thing is that you will fight not only a huge boss, but also an enemy team.

There are many possibilities, so it remains only to plunge into it all. Most often, you have to help your friends so that they can fight off the crowd of enemies. This game is also a good opportunity to make new acquaintances, because the application has a team chat.

The gameplay of Ninja Survivors Online is not difficult. You control the little hero with your finger. Enemies will attack him from all sides. There are a lot of them, but they are slower than the player is. Your task is to run around the playing field, hit the evil spirits with your magic and try not to touch them, because they will kill you. 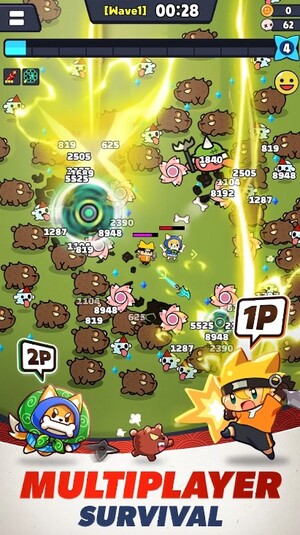 Try to survive as long as possible and study the map, find various bonuses and move to new locations. The further you go in your passage, the more difficult the game will become. Demons become bigger and stronger and various obstacles appear on the locations, such as fire projectiles. The good news is that bonuses also appear that will expand the range of your magic and help knock enemies away from you.

Ninja Survivors Online is a classic roguelike that will keep you busy for hours. Cooperate with friends and explore this magical world.