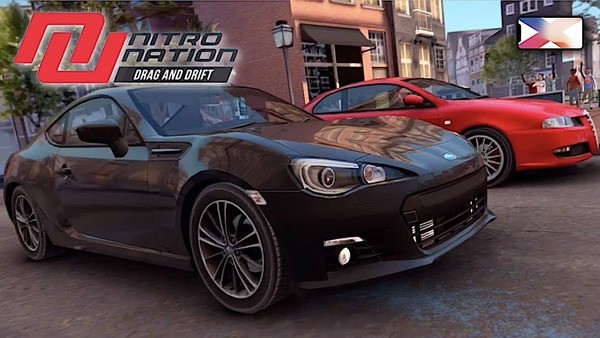 Nitro Nation Drag & Drift is a dynamic game that can grab the player’s attention for a long time! Dive into the fascinating world of cars and compete with real gamers in speed races on a variety of tracks! The game can become a real outlet for fans of high-speed and powerful cars, because the presented vehicles can speed up to unbelievable numbers! By the way, we have other cool races for you, such as Torque Burnout and Uphill Rush Water Park Racing.

One of the main features of the game is that you don’t need to refuel your car. The creators of Nitro Nation Drag & Drift made it so that players from all over the world could race without stopping for gas stations. It makes the game so addictive and interesting. Another exciting moment in the game is the opportunity to take part in short races, where the player’s car can show maximum speed and drift. You have access to two game modes: realistic, where the tires burn almost for real, and simplified, where you can safely ride around the city in company with live players. Both modes require a network connection.

If you want to become a master in driving a powerful racing car, you have to train a lot and complete a huge number of races. However, the main thing in racing is the car! Upgrade and improve your car so that its characteristics and power were enough for a large number of victories! You can improve almost all available car stats in Nitro Nation Drag & Drift. However, even in improving the car performance, you will have to restrain yourself. It is better to calculate all possible tuning consequences so that improvements do not affect the performance for worse. In any case, you need to plan and predict car improvements.

Despite the fact that the game comes down to playing with live players, you can still play with bots in Nitro Nation Drag & Drift. The main thing is to win the race! In any case the victory brings a reward in the form of game currency and points. You can spend your earnings on tuning and all kinds of “goodies” for your vehicle. Experience points may come in handy to achieve the highest possible position in the overall rating. Try hard and win all the races to climb the ladder of the best players in Nitro Nation Drag & Drift!

Despite the fact that the game release was over six years ago, we cannot say that its graphics is outdated. Thanks to constant updates from the developers, Nitro Nation Drag & Drift can easily compere with modern racing games in terms of graphics. All cars are clearly drawn. Moreover, the developers paid attention to the surrounding world, despite the fact that players even don’t have time to look on it in details. All game sounds perfectly complement the gameplay.

In order to successfully complete all races and win tournaments, you need to upgrade your cars with in-game currency. We offer you to download Nitro Nation Drag & Drift with unlimited money mod to ensure an easy and comfortable pumping of a dream car. Its main advantage can provide you with the most expensive car parts to make your ride faster.

We tested the game for the convenience of our valued visitors. Based on the testing results, we can confirm the correct operation of unlimited money feature. After the first entry into the game, you should get almost unlimited resources that can help you a lot during the walkthrough. However, if for some reason the mod did not work on your device, follow the website updates so as not to miss the new working version. In addition, installation file is completely safe – our team has verified this aspect using special scans and programs.

Nitro Nation Drag & Drift allows the player to enter into racing competitions with other players from all over the world. The game has the most modern and powerful cars that can still be improved. With the help of in-game currency, you can easily customize all characteristics, appearance and strengths of each vehicle.

Nitro Nation Drag & Drift belongs to the category of drag racing simulators. Powertrain and proper gear shifting are essential to a successful career in this project. After starting the selected race, you control your car from a third person view. Below you can find speedometer and tachometer, while on the right there is the gearbox with nitro injection button on the left. The user’s task is to change gears as efficiently as possible when the engine speed reaches its maximum. The more precisely you switch, the faster your car develops speed and the more chances to win.

Nitro Nation Drag & Drift is a stunning game in terms of graphics and mechanics that allows you to drive along the city streets in a cool, tuned car! The game can give true pleasure to all car and motorsport lovers!

Don’t forget to delete the original version of Nitro Nation Drag & Drift before installing our modified version to prevent errors during installation process.