Not Exactly A Hero is a visual novel from Buff Studio. This project offers a look at the universe of superheroes from the other side. You play the most ordinary person and there will be many superheroes with different abilities around him. Your character – Riley – must keep track of the day-to-day superhero activities. Gradually, you will get to know all the new characters. Make friends with someone, avoid others, but everything here depends only on the player’s choice. The project represents the style of a text quest with illustrations. The player has to make this or that decision many times, affecting the future passage. Only your choice can determine the final ending, so make your decisions with good thought. We also recommend you to download Star Walk 2 and Granny 3.

Developers made the game in a genre of visual novel, rare for android projects. Nevertheless, the project already has more than 50 thousand downloads in just a week.

One playthrough – many endings

Not Exactly A Hero is a visual novel in which the user directly influences the course of story through own decisions. You are not just playing the role of the protagonist in this project, but becoming one. Make those decisions that seem most correct to you at a certain moment. Each step you take brings one or another ending of the game closer, but if you want to see them all, you can replay several times. This is where the main interest in this novel lies. Moreover, the application has a hidden completion of the storyline, for which you need to get all possible nine endings, and then go through the story again. 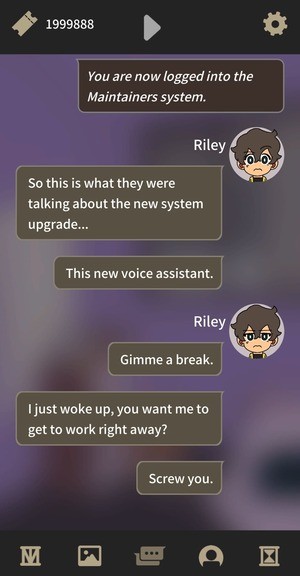 It’s not just the ending of Not Exactly A Hero that will determine your choices as you play. In general, the whole plot will take shape in a completely different scenario, depending on your decisions. There is a huge number of options, both good and bad. Here, only you are the main character, and the decision depends only on you. Thanks to this approach, each new playthrough feels like a separate game. You need to complete the game more than ten times to reveal all the options for the dialogues, all the endings and all the situations that the creators provided!

Player of Not Exactly A Hero is waiting for a meeting with several funny and solid heroes who will meet him during the missions, as well as between them. First, this is the chief. The girl is the boss who constantly gives the character new missions. Your team recruit Chris is always trying to pin you up. Uber taxi driver, who argued with the kebab man about the taste of his meat, will drive the character around the city at a discount. Do not forget that you can both establish a great relationship with some hero and quarrel with him. For example, if you support an Uber driver in a dispute with a kebab seller, the latter will be very offended by you and vice versa. However, there is always a chance to fix everything. 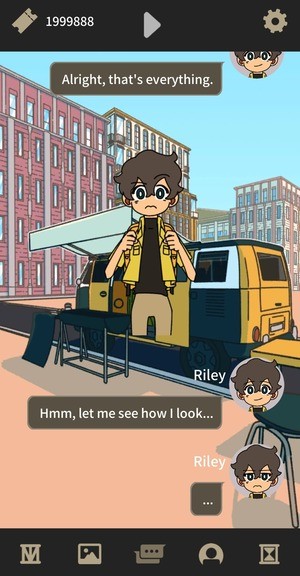 Not Exactly A Hero has absolutely undemanding smartphone graphics. As with any visual novel, this game has many static images. The pictures are drawn quite well, but if you are counting on a detailed world with freedom of movement, then you should look for another game. The application also has music that will further immerse you in this magical world.

Every choice in Not Exactly A Hero costs tickets. There is a limited number of them and eventually a moment comes when in-game currency run out and it becomes impossible to continue playing. Therefore, you have to wait for a certain time or download a mod for unlimited tickets. Using the presented mod, you can play without interruption as much as you want.

The project in question features the style of visual novel. There is no gameplay here, as you just need to choose different options for answers in a given situation. The gameplay controls for this project are simple. You don’t need to directly control Riley. For example, you will not be able to run through the locations. Instead, you choose where to go with your character using the touchscreen. A huge part of the gameplay in this project is all kinds of dialogues. Read replicas carefully and memorize what the characters say. This can affect the project progress. 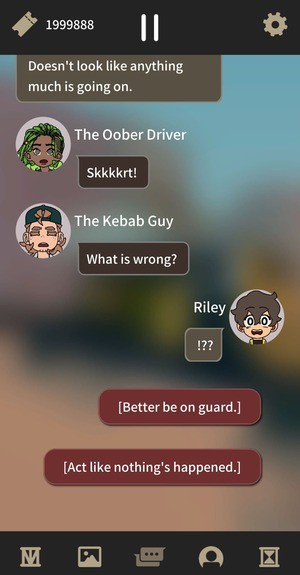 Not Exactly A Hero also has an achievement system, a picture album and a roster of characters. Each character has own funny description, which includes a short biography and generally food preferences. Riley has six cases to investigate. He has to work undercover, posing as a casual passer-by or a high school student.

Can anyone recommend the Not Exactly A Hero walkthrough for any newbie? Yes, even if the user has not previously played visual novels at all. The project is very atmospheric, so it will certainly amaze you with the vast majority of players.

How to Install Not Exactly A Hero Mod APK?