ONE PIECE Bounty Rush is an action game in which users and fans of the franchise can simply have a great time leading their favorite characters. Four players have to join forces to confront other units and take part in bloody battles. The main goal at the time of the battle is to capture more resources than the opponent’s team. Choose one of several dozen available characters and join the squad of the same brave and brave players like you. You need to control the character during battles using a virtual joystick and a set of buttons with a variety of skills and abilities. If you win, you will be able to earn experience points needed to upgrade your character’s abilities, as well as coins and items needed to strengthen the squad. Also, download SLIME – ISEKAI Memories and One-Punch Man: Road to Hero.

ONE PIECE Bounty Rush has over 10 million downloads. The average score of the game is 4.3 points.

Fight in your favorite scenes and 3D locations from the famous anime ONE PIECE against enemy crowds, watch out for traps and lead your team to victory. Each of the heroes belongs to one of five classes and possesses a certain set of abilities. Create a strong squad of them. Some of the characters are specifically designed for close combat, while others are excellent at dealing with opponents by attacking them from a long distance. Fight with teams against other players in online mode. Collect more coins than your opponents to achieve victory in online matches. The battles take place in real time. You need to assemble a team of four brave heroes and enter the battlefield with it. 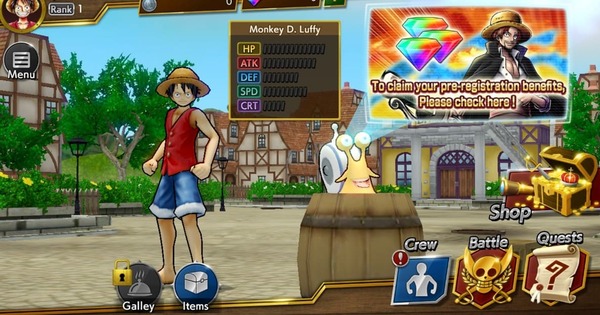 As you can imagine, any class can be very useful at a certain point in the battle. Therefore, it is advisable to have diverse warriors in your collection.

Raise your team’s rating and lead it to the top

Earn rating points for winning in ONE PIECE Bounty Rush ranked battles, which increases your rank, experience for heroes, points for improving abilities and character fragments. The rewards that are issued at the end of the season also depend on your rank (every season lasts 44 days) Change the team for battle in Edit party tab, you can and put the characters for the passive buff, which is no less important. These characters are not available in battle, but they give good increases to the characteristics that significantly increase your overall power. The higher your rating, the stronger the opponents will meet, but the reward will be appropriate. 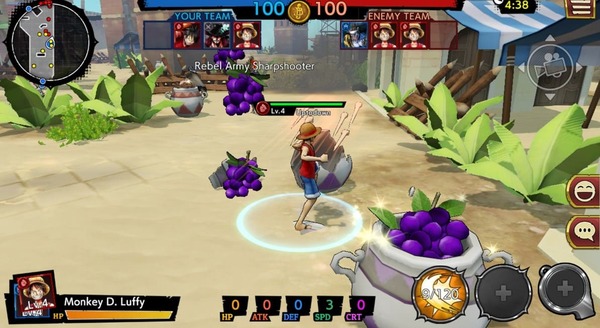 In addition to numerous battles, ONE PIECE Bounty Rush can delight you with magnificent three-dimensional graphics. Enjoy details of the entire surrounding world, cool effects and excellent voice acting with pleasant musical compositions. You will also have a built-in chat where you can chat with your squad members, write text messages and send emojis.

So that the battles in ONE PIECE Bounty Rush did not cause any difficulties for you, we suggest downloading a mod that allows you to enable god mode. In addition, the mod removes recharge time of skills. This means that you can activate them without interruption.

ONE PIECE Bounty Rush has three attributes: Blue, Red and Green. As with most games of this kind, one attribute is more effective than the other is. Blue will do more damage to red, but less damage to green. Thus, each of them has an advantage over one, but loses to the other.

Each mission has 3 conditions, basically it is to defeat the enemy with the ultimate skill, capture 3 flags or kill a certain number of enemies. All fulfilled conditions bring you 3 gems and materials for pumping abilities. In addition, there are also gold medals that drop out during League fights. After creating, they have certain statistics that can pump your random indicator by a certain percentage.

Speaking of characters, they are rated from two to four stars in ONE PIECE Bounty Rush. Two-star – the weakest characters and quite old, open initially and very quickly pumped in shop windows (for example, regular Luffy, Helmepo, Koby, etc.). They are not suitable for the game at all. As for the four-star, these are the bulk of the characters. They divide into several types, but there are both weak and very strong among these heroes.

ONE PIECE Bounty Rush is not for everyone. However, if you love anime, then you will really like it.