A new online shooter has appeared in the Play Store, which has become popular thanks to tactical battles and a special feature – isometric camera. Top-view battles make the game stand out from other popular applications. The developer MYTONA, known for the Cooking Diary and Riddleside projects, recently released a new one – Outfire Multiplayer. The shooter allows the player to plunge into the real world of battles, gather his team of heroes and start an attack against the enemy side. The project provides a whole arsenal of powerful weapons and equipment. Dynamic battles and several game modes make the application varied and interesting with up to eight users participating in each battle. If you like this kind of gameplay, then do not forget to download also Sky Warriors and Devil Amongst Us.

Outfire Multiplayer ranks among the top best action games available for online combat. This allows many players to unite in communities and friends can play in the same team. The app has over a hundred thousand installations and 4000 reviews with average rating of 4.5 points. However, many users are unhappy with the lack of chats between the duel heroes.

After the end of each battle, a scoreboard appears in front of the player, which depicts four players. There are four lines under characters: nickname, level, number of kills and total hero score. Therefore, you will be able to stand out in battle, earn more experience and receive valuable prizes. 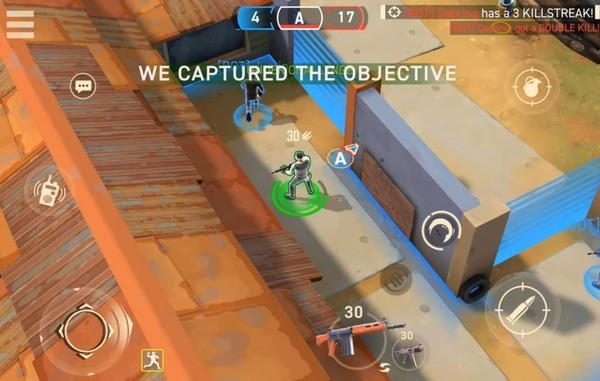 Each battle takes place in the number of players 4 by 4. This can be any random location with two opposing teams and so-called bases before the battle. After the start, everyone must defeat the opposing team: overcome obstacles, hide, heal and attack. The game ends when the entire count of time has passed.

Use only the best weapons

Another feature of Outfire Multiplayer is the sheer number of weapons. Here are submachine guns and rifles, which you can buy after getting a certain level of the game. Some models you can receive as a prize for daily visits to battles. Moreover, each weapon can be equipped by adding a variety of modules: scopes, butts and grips.

Character menu allows you to find out interesting information: level, status in battles and records. There is also information about your favorite weapon, which you use more often. There is also an opportunity to change the name and avatar. However, Outfit tab allows changing weapons and armor, change the customization and emotions menu. 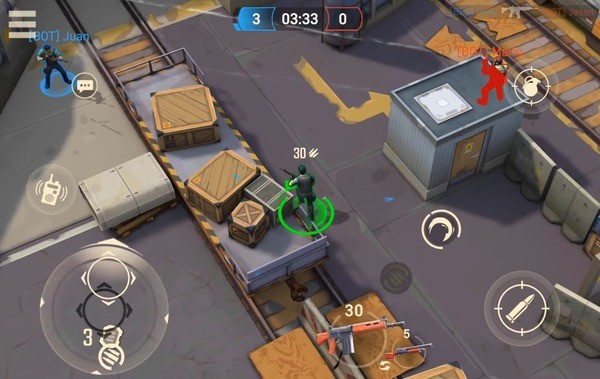 By logging into Outfire Multiplayer every day, players increase chances of receiving valuable prizes, which include banners, money, skins, poses, and even weapons. The more the chain of visited days, the steeper the prizes.

Outfire Multiplayer is designed with simple but bright graphics. Most of the skins are similar to each other, however, during the battles, you can accurately identify the members of your team. Indeed, the enemy side is highlighted in red during the battle. In the background, you can hear the music that matches the main theme of the project. During the battle, it dies down, giving the user the opportunity to monitor the enemies walking and their movement across the field. All shots and damage taken are voiced.

One of the main features of Outfire Multiplayer is the sheer amount of powerful weapons. However, it is possible to obtain legendary models at 60 levels. You can install an application with a built-in mod that gives you full access to all weapons in the game.

To get your hands on a weapon, you need to go to the main menu of the program and find the item “Equipment” in the lower left corner of the screen. Then select the desired weapon slot, the needed weapon and click on “Equip” in the right corner. Please note that visually nothing may change, but at any time, you can check the slot with the weapon and make sure that it has appeared. 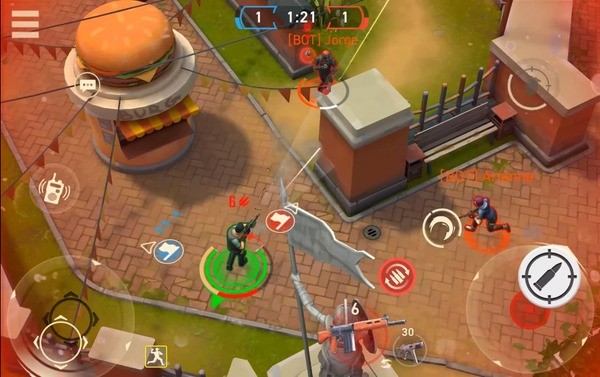 After entering Outfire Multiplayer, player immediately goes to the training ground, where one of the leading bots talks about the details of the training. Mark, in charge of the training mode, show you how to eliminate enemies and prepares the player for real team fight. In battle, you will be in a team of four warriors who are fighting another team of the same number of players. The main character has to move around the battlefield, change, reload weapons, and show skills learned in the training process.

Each of the battles contains a certain amount of time or points, by typing which the game automatically ends. When the round ends, you can track your own results: each of the four players has a score, which displays the number of killed players and points received.

Outfire Multiplayer online shooter is great for an interesting pastime. You will be able to complete a number of missions, improve weapons and receive valuable prizes for participating in the battle. In addition, show yourself as the best fighter in the next 4v4 fight.