Pack Opener for FUT 21 is an addicting sports game created by Smoq games especially for football fans. Players have to open special sets containing cards with various players. The characteristics of each athlete located on them. The result of the match depends on the correct selection of the team. You can feel like you are the coach of a cool team. In addition, you can interact with other users, arrange exchanges or sell especially valuable members. The coolest and luckiest coaches will be on the first lines of the rating system. Stylish graphics, bright design, variability of the development of events – an excellent opportunity to show your talents as a strategist, diplomat, leader. We also advise for fans of sports projects to download Retro Bowl and Club Soccer Director 2022.

Pack Opener for FUT 21 has an excellent 4.6 points. Several million people have downloaded the application.

Pack Opener for FUT 21 is a rather specific product. This game will be a treasure for you if you are a football fan and have developed tactical thinking. The gameplay focuses on the mechanics of opening packs with players. The developer was well aware that the excitement adjacent to this mechanic would attract an incredible number of users. In fact, it happened. 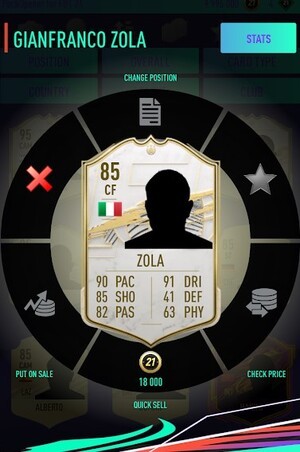 Here you have to take part in a variety of modes that will confront you with both real gamers and sophisticated artificial intelligence. In the course of victories and even defeats in battles, you will receive packs from which you can knock out rare football players. This is a rather short and superficial description, but in reality, you will find hundreds of lines of text, variations of modes and huge number of settings and indicators. Do not forget various factors of interaction between team members and a long list of other features.

The gameplay side of Pack Opener for FUT 21 is complex and varied. Do not expect spectacular matches and beautiful goals against the opponent here. Here you have to work with cards and text data. It all starts with the fact that you will methodically open the packs available to you, from which a variety of players will drop out. There are a huge number of packs here. Each of them has its own chances of dropping out a football player of a certain rarity. Do not be sad if the same athletes constantly drop out to you. It is very likely that after a series of unsuccessful packs, you will be able to become the owner of several legendary players at once, called idols here. It is noteworthy that the athletes you have obtained will not be useful to you in all game modes.

There are many modes in Pack Opener for FUT 21 and they all appear and disappear, as they are seasonal in nature. The focus here is on Draft. Here you need to fight with a real player who, like you, wants to get ahead of others. The essence of such drafts is that you need to take turns choosing players from a list of athletes and create a full-fledged team out of them. The choice must be deliberate, since each player has his own role and a number of indicators to guide.

After a series of manipulations, represent you team versus to the opposing one and determination of winner depends on a number of factors, including chemistry, popularity and multinationalism. There are also such sub-modes where you do not have to choose players from the list and those players whom you knocked out of the packs will become your team. This is just the tip, as here you will get to know various leagues, tournaments and seasonal events. 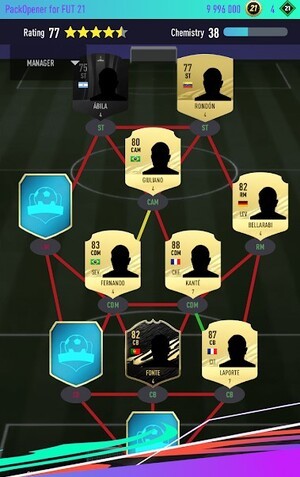 It makes no sense to talk about the graphic design of Pack Opener for FUT 21, since most of the gameplay focuses on static images and text. However, all players and clubs are licensed and the cards are very stylish.

We suggest you download Pack Opener for FUT 21 Mod APK for unlimited money, which can help you open more packs. Accordingly, it gives you a better chance of success for getting better players.

The gameplay of Pack Opener for FUT 21 provides for participation in various kinds of tournaments, along with their wards. You can oppose completely unknown users, or compete with friends. To get the maximum reward, you need to show a decent result. Do it only if you well assembled the team. Regularly open new cards and who will fall out of them is a matter of chance. Carefully monitor the balance in the team, maintain competent defense and defense, assigning to the roles those who are most powerful in a particular position. Difficulties can arise if the participants have never played together before. 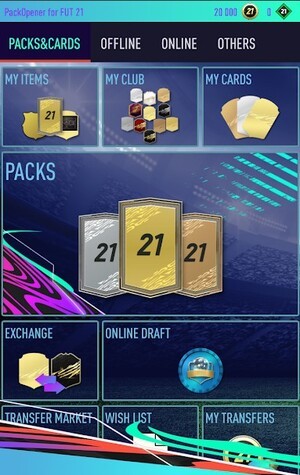 You can figure out all the intricacies quickly. Each game mode is interesting in its own way, so it will definitely not be boring here. Do not forget to name your ideal team. Choose your captain and participants responsibly for each role. For participation, and especially for victories, you will receive valuable rewards. Having received a certain amount of local currency, you will be able to acquire the most valuable players for your team. There are several types of internal currency, which differ in value.

Choose from hundreds of real athlete cards to create your dream squad. Keep in mind that not only the overall rating is important in the match, but also the team’s chemistry. It is possible that you have to sacrifice a certain good footballer for the sake of the overall high morale of the team.

Pack Opener for FUT 21 is a very difficult project, especially for a beginner. It involves analyzing dozens of types of data, but this kind of gameplay that many supporters of puzzles and quests enjoy. If this is about you or you just love football, then we recommend downloading the project in question.