Payback 2 is a dynamic Android game that represents a mixture of genres such as racing, tank simulator and third-person action. The first part of the game was available only for iOS and received the title of one of the best clones of Grand Theft Auto. Unlike the well-known series of games, where lawlessness in the city was a consequence of user’s offenses, in this case, madness is everywhere and by default.

It is a sandbox game with many gameplay possibilities. Endless battles, survival races and even tank battles await you here. All this action takes place in a big living city, where everyone is for himself. Buy the best equipment for your hero, choose among the many available vehicles and start wreaking havoc. There is always a place for powerful explosions and bloody scenes like in Shadow Fight 3, and thanks to high-quality graphics, all this looks very believable and impressive.

Gamers around the world play Payback 2 for many years. Read on to find out the main features of the game. 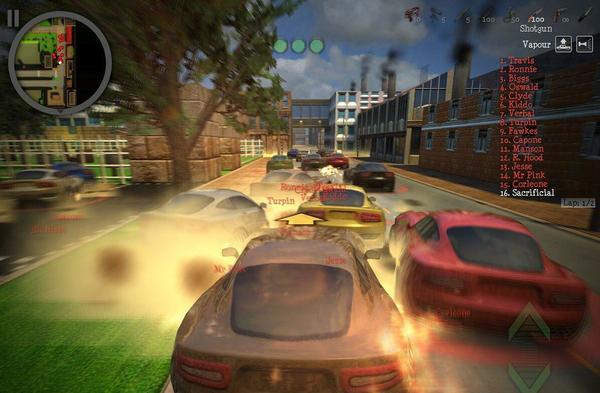 Campaign mode can provide you with access to the tank battles. It looks like the famous Battle Royal. You have a tank and dozens of opponents around. The one who remains the last wins. Shoot your enemies with all guns and enjoy colorful explosions animations. However, be careful! Enemies do not sleep and want to disable your tank. Develop a strategy for victory and remain the last among the survivors!

Try your hand at races for 16 participants

Payback 2 has an interesting 16-person racing mode. These races are not easy – you and your opponents have grenades and machine guns. Thus, you compete not only in speed with the other participants, but also try to undermine them in order to disable them. Nevertheless, don’t worry. If your character dies, you can return to the track to catch up and overtake your opponents.

In order to make the gameplay as varied as possible, Payback 2 allows you to do almost anything you want. Try to play as a rabid ice cream seller and kill all your enemies. Ram enemies in a van in a big and lively city or get out of a car and destroy enemies with the help of powerful weapons. Join one of the city gangs and take part in a mass carnage. Try out missions, some of which may well compete with GTA itself! Make a real mess on the city streets, but most importantly – get rid of all red dots on the radar, which will mean your final victory.

Destroy all living things with various types of weapons

For those of you who love bloody gunfights and massive destruction, Payback 2 is perfect as you have dozens of weapons to choose. Take an ordinary knife and cut enemies on the streets. Arm yourself with a sniper rifle and arrange an insidious ambush or take a grenade launcher in your hands and simply destroy everyone in your path.

Fight other players in multiplayer mode

Challenge your friends or join the game community, where a bunch of psychopaths tries to cut each other. Follow the leaderboards to see which of your friends is higher in rank. Try to reach the top of the world by killing everyone or coming first in epic high-speed gun races.

Payback 2 has stunning 3D graphics that allow you to immerse yourself in the game fully. There is high-quality physics, which especially noticeable in cars behavior in the city and during races. The animation of explosions is worth a separate mention that can definitely give odds to many Android games even if it doesn’t look like Hollywood blockbuster. In terms of sound, game has some cool soundtracks that are quite in line with what is happening on the screen. It gives additional drive and add emotion to the player. All this makes the gameplay even more interesting.

Payback 2 is free to play, but offers in-app purchases. However, with unlimited money mod, you can use all the content of the game free. Buy new weapons, unlock interesting epic missions and enjoy all the game content.

We have tested Payback 2 on our devices for website users. Based on the results, we guarantee you the safe and correct operation of mod for unlimited money. Just install the game on your device and enjoy the pleasant gameplay of the modified version.

The gameplay in Payback 2 can resemble Grand Theft Auto, Saints Row and other similar games. The main difference is that you won’t be in a huge open city where you can easily navigate. Just use a convenient menu with missions where you can choose what exactly you want to play.

Some of the missions are races. There are many different types waiting for you: taxi, truck, luxury car races and so on. You can also choose to confront the gang or try to get rid of as many enemies as possible. There are many ways to complete the mission, so it’s up to you to decide what to choose.

Payback 2 is a fun action game that offers a variety of game worlds, modes, vehicles and weapons. You can also customize your character by choosing from a dozen skins or other accessories. If you are a fan of the GTA series, then this is one of the best analogs for Android.

How to install Payback 2 Mod?

Don’t forget to delete the original version of Payback 2 before installing our modified version to prevent errors during installation process.