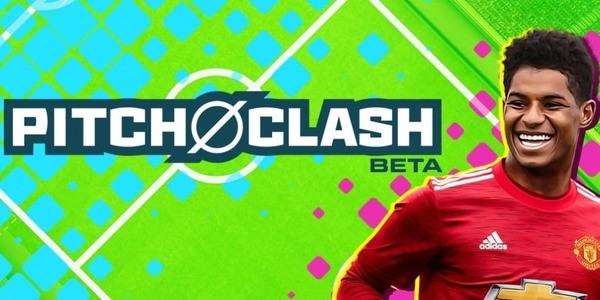 Pitch Clash is a soccer simulator that doesn’t involve players directly in matches. Its gameplay is completely tactical. You have action points and football players’ cards. Just set a certain algorithm of actions for your players and then enjoy the game simulation. Anticipate the actions of your opponent in order to beat him and make important decisions that should lead to victory. As soon as someone loses the ball, the move goes to the opponent! In addition, there are over ten thousand fully licensed footballers, dozens of leagues and hundreds of teams waiting for you. Lead your team to success and become the most successful coach in history. If you love football, then download Football Manager 2021 Touch and Football Strike.

Konami is renowned for its quality soccer games, but this time it has prepared something very special.

Pitch Clash offers a gameplay never seen before in the vastness of Android apps. All moves in the game take place gradually. You have 10 points for each turn. When you attack, use points on multiple actions of your attacking players. You can choose to flank, counterattack, or something else. Each time the game offers several players to choose. It so happens that there are no direct attackers to choose from, so you have to improvise. When you make all the moves, simulation of the moment takes place. Once the ball is lost, turn passes to the other side. If you have not used all 10 points on the level, the remainder goes to the next turn.

Since Konami has all the necessary licenses, Pitch Clash allows players to enjoy their favorite players and clubs. There are several leagues in the application. All top leagues such as the leagues of Italy, Germany, France, England and Spain also have a second division. There are also some less popular leagues, such as Belgium, Denmark, Scotland and Russia. Of course, all the teams and players also really exist. As the game progresses, you open packs, get new players and build them into your team.

Test your skills against friends and rivals

Pitch Clash is easy to play both offline and in multiplayer. If for some reason you do not have access to Internet, then you can always play a match against AI. It is not as interesting as against real people. That is why the developers have introduced multiplayer into the application, where everyone can challenge friends or practice skills with players from all over the world.

Build a team of soccer stars

After completing the training, you need to collect your first squad with several strong players. In addition, you need to get several weaker players to replenish the team. So far, you can play three matches per day, having received three packs for this. You can also use a tape measure once a day. Either ordinary gold coins or donated currency drop out there.

Pitch Clash shows games from several cameras, while the graphics itself have a good level. It is quite possible to understand the prototype of which player he represents from the models of football players on the field. The tactical mode is presented in a top view. There you select several players and give them directions. The noise of stands during the games is also present, so you can enjoy atmosphere of real football match.

Pitch Clash is in early access at the time of this writing. In addition, so far we can play only the beta version of the project. The game takes up about 1.5 gigabytes of memory on the device and therefore it definitely needs a cache. However, manually unpacking the cache is often extremely inconvenient. Some users have problems with this and they cannot start the game. That is why we have prepared the game with already built-in cache. Now you do not need to worry about anything, you just need to download one APK file and unpack it.

The game is a combination of soccer manager and turn based tactics. Participants of the match have to ask actions of the players, trying to predict moves of the opponent. The app features popular licensed leagues and professional clubs from Europe and South America. Among them are Barcelona, ​​Manchester United, Juventus and Bayern Munich.

After a short training in Pitch Clash, you need to choose a team. It won’t affect anything, just your name and coat of arms. The team can be absolutely any of those presented in the application. Next, you need to arrange the players in positions and start the game.

If you are on the defensive, then choose a few functions for your goalkeeper and defenders and then watch simulation of the situation. Try to understand what your opponent is up to and neutralize his attack. As soon as you manage to intercept the ball, you become an attacker. By the way, corner and free kicks also have assigns in the game. In this case, everything happens automatically. Here you can no longer influence anything. If you want to chat with your opponent during a match, you can send him emoji.

Pitch Clash offers players completely new perspective on the world of football, and it is likely that this approach will pay off. Introducing turn-based moves into the simulator is a bold move and very interesting. We recommend you to definitely familiarize yourself with the new project from Konami and wait for its official release.