Pixel Demolish is an extremely simple project from the Dalak Games studio. In this simple game, players have to need to destroy various figures using the press. The gameplay looks like this – various pixel shapes will descend on your teeth. Crush them all. Get gears for your mechanism to destroy everything in your path even more actively. The developers have not forgotten about the pumping system, which allows you to improve your unit, make it even more deadly and dangerous. In general, almost nothing is required from the user – just tap, collect coins and choose improvements, passing level after level. This app is a great way to relax. If you are into arcades, then download Lonely Survivor and Pull It Down.

Pixel Demolish has over half a million downloads with an average rating of 3.9. If you are interested in the game, then read our review. 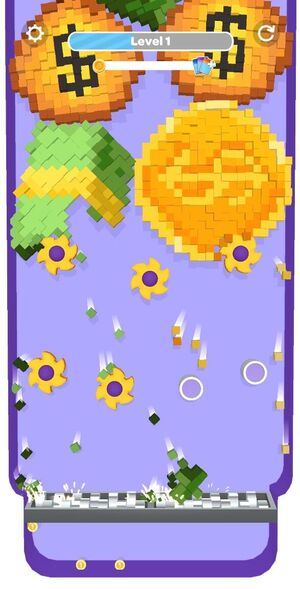 Go through dozens of exciting levels, where on each of them you will have one goal – crush all the figures with the help of saws and teeth. To do this, you need to improve your mechanism and add new parts to it. You have to destroy a large number of different figures built with expensive materials. There are beautiful graphics with realistic physics and simple controls.

All this will help you relax in this game. At each level, you will see a bar that shows an indicator of how far this location has been completed. When it is full, you will move on to the next level.

Pixel Demolish also has a leveling system. It works here in the following way. When you go through some part of the task, you are offered three types of improvements to choose from. As a rule, you can add an extra gear, increase it, or increase the number of teeth, which will make the gear even sharper and more dangerous.

Another upgrade is also available immediately, but to get it, you have to watch ads. During the levels, you will see several of these boosts. It is worth noting that these improvements do not carry over to the next level. 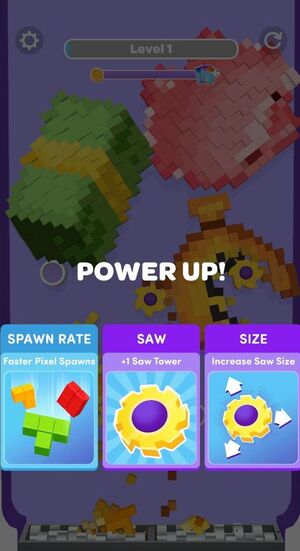 Another interesting feature of Pixel Demolish is the presence of a variety of locations and levels. Their essence will be similar, but still different. The difference lies, for example, in the different arrangement of the gears, as well as the presence or absence of a press at the bottom.

This can drastically affect the gameplay, because you have to calculate where to install gears, where to increase them, and where it is better to do nothing. In total, the developers have prepared several dozen levels for players, and each of them is available for summoning. If not unique, then worthy of attention.

Pixel Demolish has vertical gameplay as well as fun pixel color graphics. There is practically no sound in the game, but this does not interfere with immersion in the process.

We suggest you download Pixel Demolish mod APK for an unlimited amount of money. 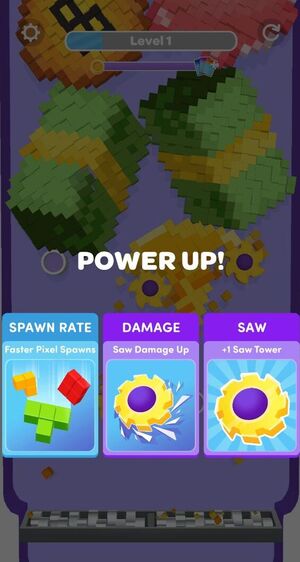 Try to do everything so that your figure recycling plant does not stop its work, and you do not lose. At the beginning of the game, simple figures will appear. They will fall under the press to proceed them later into various parts. In the future, you will grind these details into dust. In this case, you will receive game currency. Spend it on various upgrades.

You will have the opportunity to improve the momentum, the figures themselves and the conveyor. You can improve the speed of the conveyor, its height, size, add wheels, gravity and gear size. From time to time, you may come across various bonuses, such as in-game currency or a multiplier for receiving money for scrapping cars.

Pixel Demolish is a very simple game that has one goal – to kill some of your time. If you were looking for simple apps for the whole family, then this project is perfect for you.