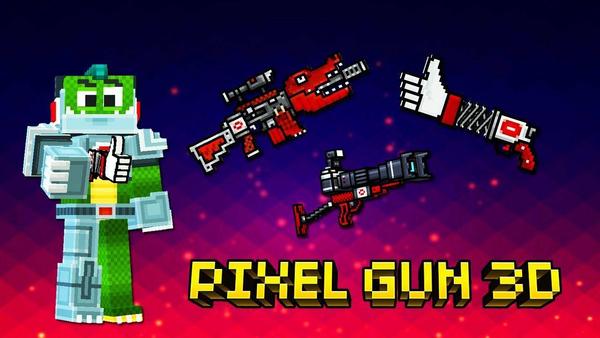 Pixel Gun 3D is an online first-person shooter in the style of the world-famous Minecraft. Released in 2013, it immediately became one of the favorites among fans of the genre. Millions of players have already appreciated the game and became its fans for a long time, so hurry to plunge into battle world. If you want a lot of fun and play with your online friends, then Pixel Gun 3D is definitely your choice. Don’t like all these online battles? Then there is a zombie mode where dozens of undead will confront you.

Developers used Minecraft engine to create the game so in some places it is very similar to predecessor. If you are not afraid or even seduced by the pixel graphics that have gained so much popularity now, then download Pixel Gun 3D and show everyone who the coolest shooter is. Participate in exciting game modes, online team battles or exciting single-player matches.

If you have read to this place and still not downloaded the game, then we will definitely dispel yours doubts now.

This is mostly beloved mode in Pixel Gun 3D. Join other 99 players on one of several maps and fight for the right to be the last survivor. There is always only one winner! At the same time, it does not matter what equipment you have in the normal game. Only map detailed knowledge and honed skills will help you to win the battle. 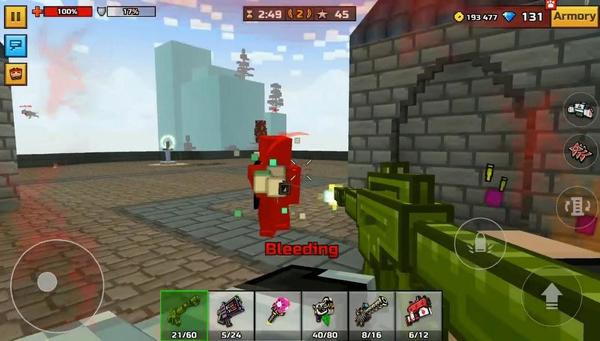 Over eight hundred types of weapons.

Pixel Gun 3D provides over eight hundred different guns, so you can definitely choose something to your liking. You can arm yourself with a simple pickaxe and smash opponents’ heads or take the legendary Piranha and burn all living things on the map. Each weapon has both advantages and disadvantages. Try them all, choose the coolest for yourself, and don’t forget to throw grenades at your opponents.

Here you can always find something to have fun. There are more than a dozen different game modes, including Death Match, Arena, Survival, Co-op Survival, Campaign and others. Arena becomes available when your character reaches third level. Here, you need to fight hordes of zombies. This mode allows you to practice your shooting skills and earn some coins. Campaign gives an opportunity to go through levels and complete interesting tasks killing various enemies. The game also offers modes for multiplayer lovers. Explore the map, plan your route, search for cover and good shooting positions and head on to victory.

Another great feature of Pixel Gun 3D is elaborate clan system. You can create your own clan or join an existing one. Fight other clans to plunder their fortresses. The winner will get generously reward. Victory allows you to take possession of the enemy’s clan chests, where you can find various valuable items. Conquer more territories to control the entire global map.

The game has pixel graphics, which gamers from all over the world like after Minecraft release. There is no image of blood after a murder or any other violent images, so Pixel Gun 3D is suitable even for the smallest video game lovers. However, adults will probably also find something to their liking. 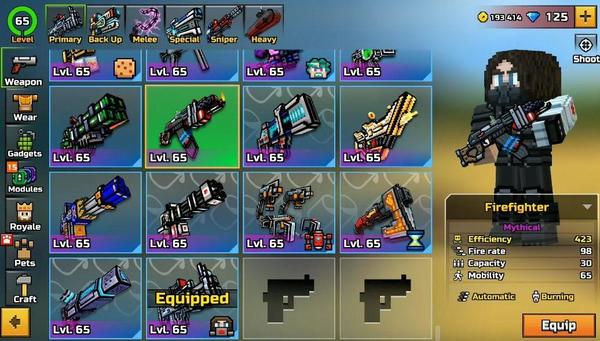 Pixel graphics are not demanding on hardware, so owners of not powerful smartphones can also enjoy this masterpiece. The sound in the game is excellent. Shots, grenade explosions, sword strikes and other effects will definitely delight even sophisticated gamers. Sound design will take you straight to the battlefield.

Our mod always provides players with unlimited weapons to use. Everyone had such a situation when you run out of bullets during the shootout and it’s very annoying. Now you don’t have to worry about this problem anymore. Go and kill enemies. We’ve personally tested Pixel Gun 3D. The game runs smoothly, everything stated is true – mod for infinite ammo also works properly. You do not need to do any additional actions to activate it after installing the game. 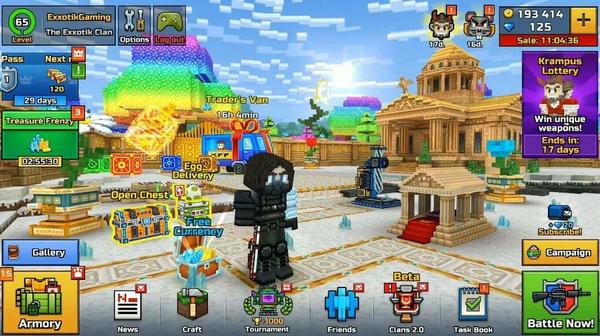 In-game world features many different bonuses and mini-games. The controls are very simple that even an inexperienced player can understand. Huge world with a large number of online players will not keep you waiting long when selecting opponents.

The game, like many others, has a donation system that allows you to buy game coins and gems for real money, which will give you an edge over other players. Despite this, it’s really addictive, as it is very difficult to stop playing. Those who want to have fun, love to work in a team and intend to test their reaction will definitely love it.

Pixel Gun 3D is definitely a quality project that deserves your attention. This is one of the best 3D shooters on Android. A huge variety of guns and gadgets, several game modes and mini-games, more than a hundred game maps and an interesting single player campaign will appeal to even the most sophisticated gamers. However, if you like not only action, but also board games we also recommend you to play unlocked Monopoly.

Please note, you will do this action only for the first time and all the other applications will install without granting any permissions.

Don’t forget to delete the original version of Pixel Gun 3D before installing our modified version to prevent errors during installation process.