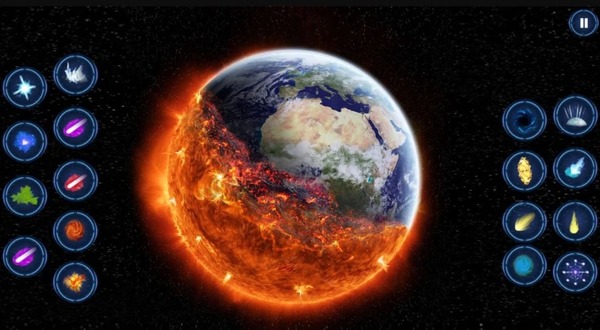 Planet Smash will make you feel like an invincible and very cruel dictator, because you will only sow chaos, destruction and various catastrophic events around you. Your task here is only one thing – destroy all life as much as possible, and to do it as quickly as possible, insidiously and mercilessly. Here you will be engaged directly in the fact that you travel through the galaxies and destroy all existing planets with lightning speed. To do this, you have a huge set of high-tech weapons: fast, powerful, explosive missiles. In total, there are dozens of different variations of destructive weapons that you can unlock as you progress through the game. Also download The Godfather: City Wars and Kunai Master: Ninja Assassin.

The application invites you to become a real planet destroyer. If you are interested, then check it out. 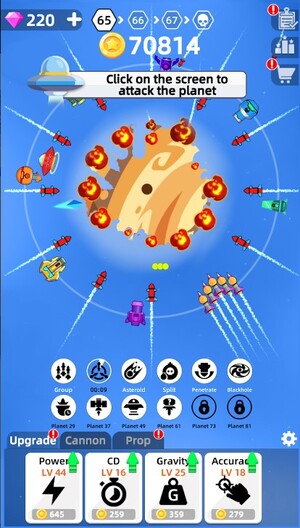 Planet Smash is a minimalistic arcade game where users have to deal with the destruction of various planets. What kind of planet is in front of you and what features it has – it does not matter at all. After all, the main task in the game is to destroy another planet, but it is up to you how to do this. Run the first test and get the first planet to wipe off the face of the galaxy.

Each level has its own color scheme, which creates a cool atmosphere and make the visualization more diverse. You can destroy the planet itself in completely different ways. All planets are unique, as they differ from each other not only in size, but also in composition, density and living beings.

Planet Smash offers to travel through an endless universe in search of new planets to destroy in the most ruthless way. You will find an extensive selection of weapons, nice hand-drawn picture and addictive gameplay filled with action. It is necessary to use all available weapons, ranging from simple missiles, nuclear bombs and ending with laser guns. In this simple but insanely addictive arcade game, you have to become the destroyer of worlds. You need to be as ruthless as possible, watching how the planets break up into small particles. 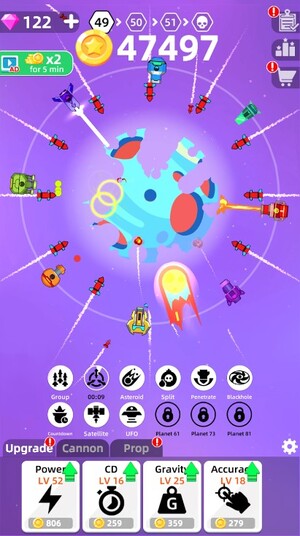 Engage in the modernization

Do not forget about such an important aspect as updating your abilities. You need this to defeat the bosses in Planet Smash. Destroy planets by punching holes in them or splitting them in half. The game will help you cope with stress perfectly or just get distracted for a while.

Destruction of planets allows you to earn in-game currency, which you can spend on buying new weapons and upgrading them. The more explosives and guns at your disposal, the easier it will be to destroy the next planet.

Be the bad guy

Powerful rockets, atomic bombs, aimed shooting can help you complete your large-scale mission. The game allows you to spend time without thinking too much about humanity and compassion. The role of a noble hero or the savior of humankind from another misfortune has long ceased to evoke strong emotions, so the chance to try yourself as an all-powerful villain is also great.

If you want to play without any difficulties, download Planet Smash mod APK in which you can purchase free items without viewing ads.

Planet Smash is a game that can help you get rid of accumulated stress. It will be an excellent acquisition for everyone who is overly modest and polite in real life. The need to let off steam will no longer destroy people who are too educated for open confrontation from the inside. 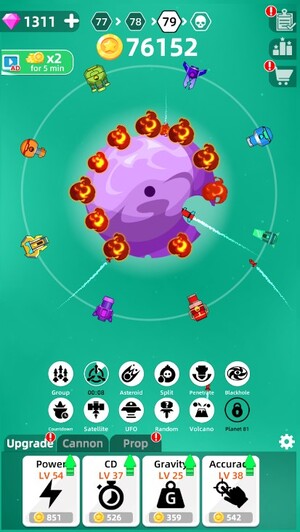 Now everyone have at their disposal an effective tool that provides an outlet for stress and emotions. A game with colorful design and simple rules, dedicated to destructive actions, will become a convenient platform for the realization of secret desires.

Gamers who have installed this application on their mobile devices will be able to engage in the destruction of planets with the help of powerful weapons. Get everything you need for a dynamic fight for victory. The game has simple controls adapted for touch devices, with the help of which every determined participant will be able to realize their ambitious plans. Traveling across a huge galaxy, you will destroy planets by launching powerful atomic bombs and projectiles in their direction.

Enjoy this entertaining game where you have the opportunity to travel across a large galaxy to find many planets on which you can test the power of your all-destructive weapon.