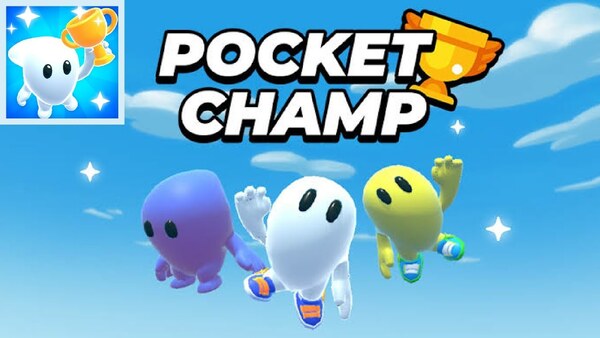 Pocket Champs is an exciting adventure runner from Madbox that invites you to enjoy the speed of racing with other characters on winding tracks. Compete with other users in the race without giving them the opportunity to reach the finish line. The essence of the gameplay is to get ahead of your rivals. There will be various obstacles on the road that you need to jump over, slip under them or go around. There are abysses and sharp rises. In this regard, in order to reach the finish line first, you will need to show dexterity and attentiveness. Also, download GT Car Stunt Master 3D and Torque Offroad.

Pocket Champs is an interesting runner that will allow you to compete against artificial intelligence.

Pocket Champs offer only one game mode, which essence is to race with the players. Each time one of the most interesting tracks will be selected for the race. Often you can find yourself on the same track, but software algorithms make some adjustments so that you cannot learn the path and pass it with your eyes closed.

The tracks require you to have a high reaction speed, as the characters here move extremely quickly, and obstacles appear quite unexpectedly. You have to run across narrow bridges, dodge mountains of debris, slip under beams and jump over barriers. It is worth noting that enemies will be waiting for you on the tracks, which you can destroy by pressing the somersault or jump button.

Pocket Champs is a classic runner where victory is determined by the time spent. You need to collect scattered bonuses around the map, avoid traps and place them for other players. The winner is the one who crosses the finish line first. If we consider how the victory goes, then the main thing here is not speed, but the ability to dodge extraneous obstacles.

Do not forget about the bonuses scattered along the way, because they can bring many benefits. Such things can increase speed, make it invulnerable to obstacles and give odds to opponents. When the run is completed, you can spend the earned coins on the character.

In addition, you have to pump a character using coins from time to time. It is worth noting that individual character leveling does not always bring a large number of bonuses. This has a favorable effect on improving skills. Be able to increase the duration of boosts. Outside of rounds and modes, you can upgrade your champions to increase their speed, agility, and unique abilities.

In the future, you will be able to prevent opponents in every possible way, sending slowdowns on them, exploding mines under your feet and throwing objects. If you really like to compete, then you will definitely like the rating system and the PVP table. It gets updates every season, so you can try again and again.

By and large, Pocket Champs is a regular runner, that is, you just need to continuously run forward, trying not to run into various obstacles. While running, do not forget to collect different bonuses. At the same time, do not forget that on the track you will meet a lot of difficult rings, sharp turns, as well as sudden cliffs. There are also a large number of levels. However, you have only one goal in any of them – be the first to reach the finish line. For this, you need to perform a variety of tricks, setting traps and trying to cut other characters.

In order to make the gameplay as interesting as possible, dozens of different locations have been prepared, which you must gradually open. To do this, participate in the initial races, as well as complete daily tasks and compete with artificial intelligence.

Pocket Champs is a classic runner with only some features. Here you can have fun killing a couple of free minutes, but no one bothers you to play the application at least all day long.