The romance of flying on an airplane occupies the minds of many, but this NimbleBit game doesn’t allow the player to take the helm. Instead, Pocket Planes offers to become the owner of a small airline, having at its disposal several aircraft at once. At the very beginning, you can choose the region where you will start. It could be any continent. Now you have three airports and four of the most basic planes. There are cargo, passenger and combined aircraft. Then proceed to air transportation and make a profit. The game has pixel graphics, which can scare many. If you try to understand the game, then it will definitely charm you with its capabilities. Among other simulators, we recommend you Survivor!.io.

If you want to know more about the project, check out our review. 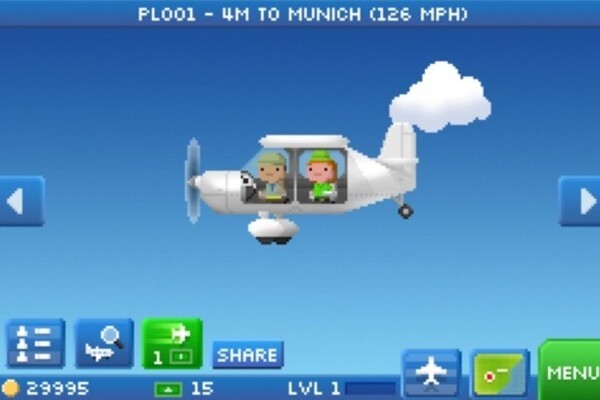 The first step is to select the region in which you would like to start the game. There is almost the whole world to choose from, but there is not much practical difference from where to start. So, you have decided on the place where your hectic activity as an airline manager will unfold.

Initially, four cities will be available for work in Pocket Planes. You have to build an airport to access new ones, which is not cheap. You can improve airports, as this increases the flow of passengers and cargo – a source of income for the player. It is time to launch the first plane.

The aircraft in Pocket Planes includes several important characteristics. This is the speed, the volume of the fuel tank and different types of passenger or cargo compartment. For example, if the aircraft is equipped only with a passenger seat, then you will not be able to transport cargo. Initially, the most spacious aircraft can only hold two units of anything.

We look at what is available for transportation. Next to the passenger or cargo is the amount you need to pay for delivery to your destination. Then we indicate the route to the loaded aircraft. Initially, it will be just one point. In the future, an aircraft loaded to the eyeballs can fly through several cities, transporting people and cargo. 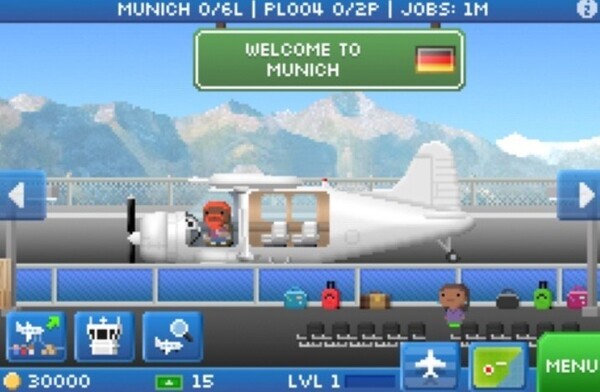 Each flight is planned as follows. Choose a plane, click on the load of cargo/passengers and select the most suitable for you. It is better that everyone flies to one city, if all 4 passengers of a 4-seater plane fly to Berlin, for example, then you will receive +25 percent for each. Other than a good profit margin, you don’t waste extra fuel. Passengers and cargo available at the airport are updated every 4 minutes.

If you could not fill the plane completely, collect the necessary passengers and wait for new ones. Maybe there will be those missing in the desired city among them. It happens that the plane flew into the city, at the airport of which there are neither the necessary passengers nor cargo and you have to stand idle. Fortunately, money is not lost for this. Aircraft of a higher class can only land at large airports. In general, planning a flight in Pocket Planes is also an exciting process.

The graphics in Pocket Planes are at the level of 8-bit consoles of the last century. This fact does not spoil the impressions of the game, but on the contrary gives it an unusual look and a kind of charm. So get ready. The sound matches the graphics – as simple as possible, but well complements what is happening on the screen.

We recommend downloading Pocket Planes mod APK with VIP Unlocked. Money and bucks will increase when you spend, you will also get free things without watching ads. Also, you will be able to make free purchases. The mod requires an internet connection to work. 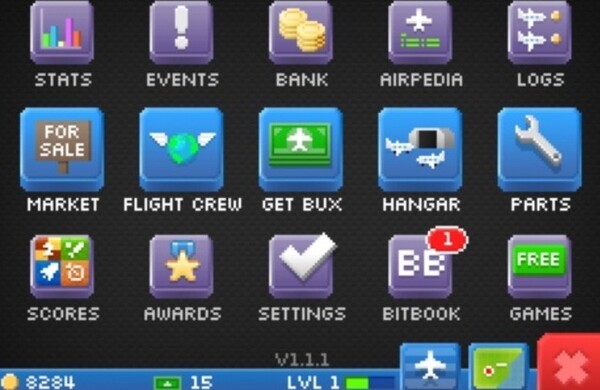 It is an airline simulator, where you are the head of a small company that sends passengers and cargo on its planes around the world. However, in order to become a successful transportation corporation and take a leading position in this market, you will have to try hard. Open new aircraft, repair equipment, purchase spare parts and compete with other companies. Unlock giant aircraft, jets, single-engine aircraft or even cargo helicopters as you gradually expand your fleet.

Create your own coloring style with different colors and stickers, meet interesting people, and send passengers and goods to over 250 cities as you travel around the planet. Hire pilots in Pocket Planes and dress them up in unique uniforms. Master new airports, located in small towns and cities with a million inhabitants.

Pocket Planes is a very interesting game where you can spend many hours playing. This is a classic airplane sandbox where there is something for everyone.