Police Patrol Simulator is a racing simulator from developers of SkisoSoft, where main emphasis is on the role of police officer. Bring safety back to city streets by catching as many intruders as possible. Feel like one who brings justice to this world, honors the law and commands respect. Search and detain criminals, redirect them to jail and monitor level of calm on the streets. There is an impressive car park and a police station where you can fix your car and see who is in the prison. You can go on different paths, be both a good cop and a bad cop, it all depends on your talents and desires. Download other simulators as well, such as Idle Mail Tycoon and Flight Pilot Simulator 3D.

Simulators are a popular genre for many gamers of different age groups. Children love taking care of pets, especially when their parents will not let them have one. Teens are interested in learning more about different professions such as cook, doctor or teacher. Adults love harsher types of simulators. This is where the Police Patrol Simulator comes in. All your life you have liked police officers, but still you did not get this profession? Try to catch a couple of intruders in the virtual world!

Patrol the city and fine violators

Before entering the city, game offers to choose control: automatic transmission, semi-automatic or manual. You can select the type of joystick at the top. Don’t forget to turn on turn signals. When you get out of car in Police Patrol Simulator to move and make stops, the control system changes. 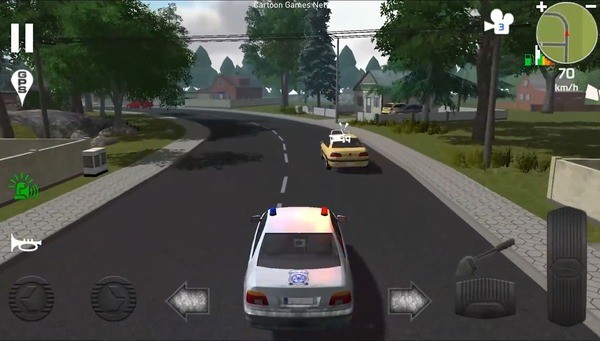 The gameplay involves patrolling the city. A special icon appears above those who violate the speed limit. You must turn on the siren and sound a signal to check documents, issue a fine, detain or release the driver. Watch carefully how all road users follow the road rules. Penalize for incorrect parking.

Having earned enough money, you can buy a new car in Police Patrol Simulator. The most expensive models allow you to catch violators in matter of seconds. Customization includes different types of flashers that go well with cars. Engage in tuning in full, adding a cool exhaust pipe, bright spotlights, car airbrushing. Don’t forget to improve engine or change wheels. Remember that car is running out of gas and getting dirty. Keep company vehicles clean to avoid losing your reputation.

Place a cute jiggle figure in salon, such as a classic Hawaiian girl, kitty, mini Batman or other fun toy. You can hang the flag of your country on mirror: Argentina, Austria, Belarus, Belgium, Brazil, Canada, Greece, Estonia, Finland, Russia and others.

The gameplay in Police Patrol Simulator is very varied. To begin with, you have a completely free mode of movement around the city. There are no required assignments or quests. You can simply move around the streets, roads and areas in search of intruders. It is possible to keep an eye on especially dangerous offenders. You can receive much more experience and money for such deeds. However, they are issued not so often and making them much more difficult than just issuing a ticket for incorrect parking or speeding. Real chase at high speeds awaits you in this case and you will need serious dexterity. 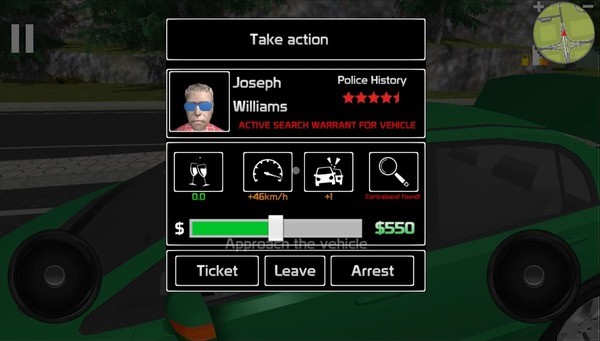 Police Patrol Simulator has 3D realistic graphics. The quality of models in the application is quite high. Developers worked out even the environment. We should note that the game is very demanding. You won’t be able to play it on a weak mobile device, so consider this before installing. The city lives its own life in the application and this is due to sound effects. Each car sounds different, but in general, you will feel like a part of a big city thanks to high-quality audio.

We suggest you to download a mod for unlimited money. Thanks to acquired riches, you will be able to purchase a new car, repair it and buy a new prison cell in precinct. You may need a lot of money during the playthrough, so the mod will be useful for everyone.

Police Patrol Simulator has a damage system that works if you hit a fence or another car several times. It will smoke and may even fail. The more hits, the slower you drive. It is also easy to puncture tires or even lose a wheel if you drive at high speed onto the side of road or poor road surface. You have to constantly monitor the condition of your vehicle and even repair it for money. 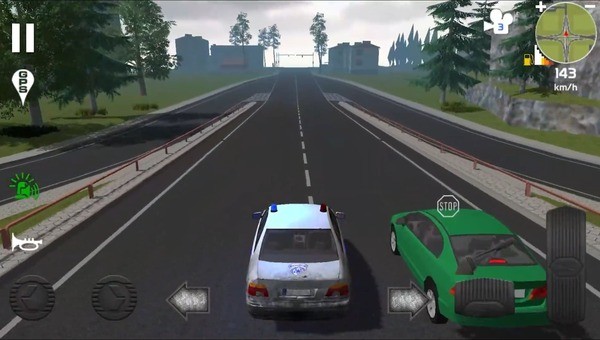 As far as economy is concerned, you will be making money on violators. First, you need to figure offender out to arrest or punish him. There will be a speedometer above all cars within your range of sight, by which you can determine speed of moving. However, you cannot only write checks for exceeding. There are three categories that driver can violate in this game. In this case, you yourself decide how severely you can punish him. Mark exactly what offenses he committed and move Police Patrol Simulator slider from minimum to maximum penalty to get a certain percentage from it.

Gameplay of Police Patrol Simulator features a free camera that you can rotate and change in view from the first, second and third person. You can even watch from cockpit by observing dashboard readings. Developers did their best in terms of gameplay phase with driving a car. The controls are realistic, but simple enough. Find a virtual joystick in form of steering wheel on the main screen. It is responsible for car movement, as well as several switches, in particular pedals for acceleration and braking.

Police Patrol Simulator is fairly simple and intuitive simulator with addictive gameplay. Practice driving fast but careful to avoid ruining your company car. Do your job in good faith to get a good bonus or even promotion.