POLYWAR is a modern shooter based on tactical battles, many unique characters and upgraded player’s weapons. A distinctive feature of this game is that there is no auto-shooting, so you have to aim and shoot on their own. In addition, you will be able to use a huge arsenal of weapons, upgrade weapons and be able to purchase skins and trinkets on a special marketplace. Enjoy a high-quality study of the game, where you will be able to customize many settings for yourself. Convenient control and high-quality optimization only add comfort during gameplay and make the project as convenient as possible for almost any gamer. If shooters are your thing, then we can also recommend Stickman of Wars: RPG Shooter and Bladed Fury. 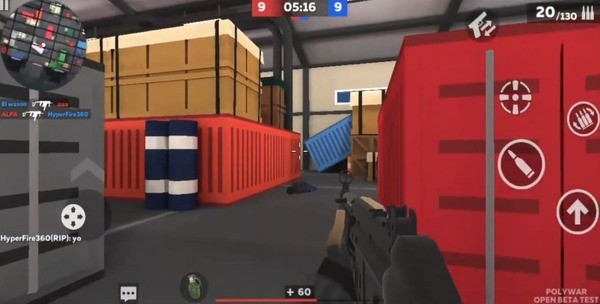 If you are interested in the walkthrough, then read our review to the end.

Think over tactics for battle

The gameplay within POLYWAR is not much different from what the user is used to seeing in such games. This is still the same team tactical shooter in which reaction speed is more important than planning and a clear distribution of roles. Main essence is to destroy a group of opponents. At the same time, there are also tactical tasks. For example, they vary depending on the map you are currently playing on to capture a point. Each of the users controls a specific player who has a wide variety of weapons. As in many shooters, the skill of the player is very important, but the right strategy for the fight can help you even more.

POLYWAR has several game modes waiting for you. Classic mode features typical team fight, where the team that successfully outperforms opponents in number of frags wins. Resurrection offers you to face a typical fight against everyone. You will not have allies, so you can destroy all living things. Capture the Flag mode offers you to steal the flag of the enemy team and bring it to your base. You will be able to learn about other modes by personally trying each of them.

You can only take two weapons with you to POLYWAR level. At first, you will be the proud owner of initial pistol and a rather weak submachine gun. Going forward, you will unlock powerful hunting rifles, assault and sniper rifles, shotguns, explosives, and more. All weapons are available for upgrades. You have to keep a balance between damage, accuracy, reload speed and maximum amount of ammo that you can take with you to the level. Improve all of the above parameters with help of in-game currency, which you will earn as you progress through the campaign. 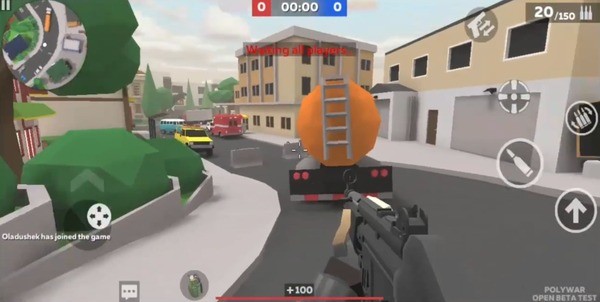 Complete tasks and get bonuses

Additionally, you will see a list of achievements in POLYWAR, which completion promises you good rewards. In general, earning currency here is quite simple. However, in the later stages, you still have to replay already completed levels several times in order to accumulate the necessary amount for important upgrade of your favorite weapon. If this situation does not please you, then you can easily purchase the amount of in-game currency you need for real money.

Three-dimensional graphics in a well-recognized cartoon shell is present in POLYWAR. Developers worked out all models, details of the environment and weapons at a high level. Animation turned out to be very colorful and spectacular. Of course, the soundtrack also plays a huge role in the game, because thanks to it you can figure out where the enemy is and where the ally is.

Free Shopping allows you to buy whatever you want if even do not have the required amount of currency.

From the first seconds you will feel that you are in a cool dynamic shooter, where everything is of high quality. POLYWAR is able to give many incredible emotions when you conquer the pixel universe. You will devote most of the battle time to get the necessary experience and currency. At your disposal is a large arsenal of weapons, high-quality graphics, pleasant music, as well as many interesting vehicles. All actions take place in real time, which only fuels interest. 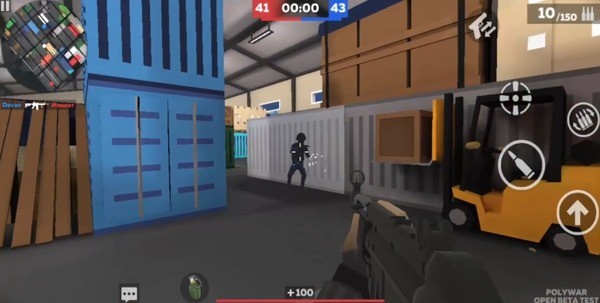 Your opponents will be serious players who can fight back everyone. Teams are selected randomly. Conduct all actions in different locations scattered across different parts of the planet. If you do not have enough strength to cope on your own, you should call friends. After the teams unite into a single whole, you will be able to defeat the strongest opponent.

The developers decided to scatter tasks in different parts of the world to make it more interesting to study the gameplay. You will be surprised when you find out that many locations have hiding places and shelters. Don’t forget to use it so you don’t get detected.

It is difficult for new shooters to compete with the classics of this genre, but the developers are doing everything possible to turn the market of such games upside down. If you also want to immerse yourself in the world of military battles, then hurry up to download this game.