Poppy Stickman Fighting is a fun online arena for those who like to spend their free time with excitement. The game offers to take part in real battles, controlling stickmen. It is perfect to while away the travel time or simply spend it in a fun atmosphere. Here the player finds a thin man who loves to fight and numerous locations for organizing fights. The project offers you access to an arena in which you are free to fight as much as you want. Choose a character, a weapon from a huge arsenal, a color to emphasize individuality and go ahead. Destroy the enemy using different skills. Characters are no different from each other. Skins affect only the visual perception of the hero. Don’t forget to also download OVERDOX and Rocket Royale. 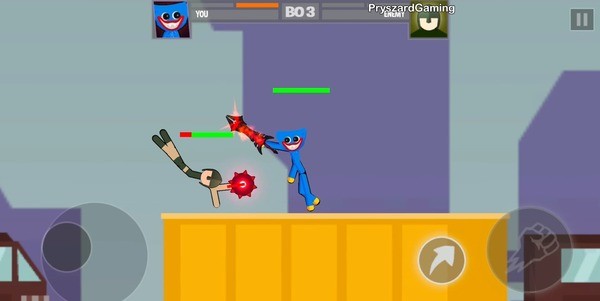 Play the simplest, however, very active fighting game, where you have to fight a lot with opponents in different locations.

Poppy Stickman Fighting presents players with only three game modes: single player, 2 players and survival. The initial two modes give you the opportunity to fight in the arena with bots controlled by artificial intelligence or a real enemy. Fights here are rather fleeting and their essence is to reduce the streak of a competitor’s life down to zero.

Survival mode throws you into a cluster of virtual opponents. Reflect attacks from all sides by different people who want to eliminate you. Enjoy a considerable map and your favorite weapon with which you can cut opponents. This mode implies a set of records in form of points received for killing opponents.

Use all kinds of method to kill the enemy in Poppy Stickman Fighting. However, a variety of weapons will be an excellent help for you. It is worth noting that the selected weapon constantly changes. Any battle not only moves you to a different location, but also rewards you with different murder weapons. In the role of weapons, they use ranged and melee weapons, capabilities of famous superheroes, portal gun, anti-gravity boots and so on.

A huge part of weapons in Poppy Stickman Fighting does not do much damage to a competitor, but only significantly throws it back or throws it up. The problem is that the game allows finding a certain number of traps or holes in any location. If the hero falls into the abyss, then the player will automatically be defeated in the battle.

Buy a variety of skins

Success in the battle bring coins or chests, which can contain skins. There are many skins in the application, so you can become almost anyone. Be a character from a comic book, a famous fairy or a bizarre superman, which has no analogues. Put on your head a crown, a cap, glasses, a helmet with a plume, a hat or a mask of the Dark Lord from Star Wars. 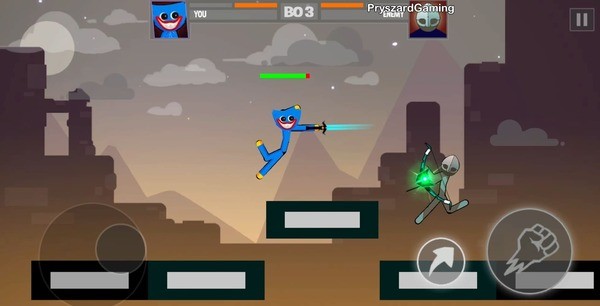 Naturally, skins will not affect your power, but they can help protagonist stand out from everyone else. In general, we can say with confidence that various skins are one of the strongest sides of the project.

Poppy Stickman Fighting project belongs to Stickman category, which means a specific visual style within the gameplay. The game uses stunningly simple two-dimensional graphics. Each character here is a little man, as if drawn by hand. This style allows you to run the application on almost any device. Well, a huge number of skins allows you to give free rein to your imagination.

So that you have money for any skins and improvements, we suggest downloading our mod for unlimited amount of money.

Poppy Stickman Fighting offers to take part in duel battles. Before the fight, you yourself choose the location, skin, color, weapon for your Stickman. The goal of the game is to win the battle by inflicting maximum damage on the enemy (reflected in red on the character track). While in a duel, you need to dodge the opponent’s blows in order to reduce the damage. The winner is the one who retains the green color (health points) on HP scale. Play one of two duelists, a stylized stickman man with a head in form of smiley. Choose the color independently from the proposed palette. 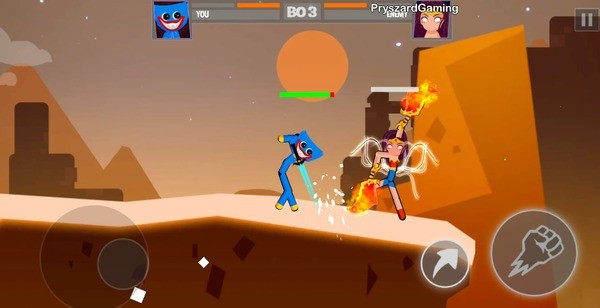 Poppy Stickman Fighting provides access to a large selection of weapons or prototypes. It is possible to select weapons. It can be simple, cold, or gunshot, sometimes even funny, absurd. As a weapon, you will find a club, a piece of armature, a baseball bat, a paintball pistol, snowballs, a pike, a mace, a rifle, laser swords, shield of Captain America and much more. However, you can defeat the antagonist with a certain skill and dexterity, armed only with simple scissors.

A place for a duel is a kind of location, often consisting of several levels, traps and obstacles await you on it. You have to watch the terrain changes while moving. The battlefield can be roofs of cars, surface of a cliff in a sea of ​​lava, sea, movable platforms suspended in the air, deckhouse of a pirate ship, rooftops of houses, a crane arrow, flying islands and so on.

Poppy Stickman Fighting helps you to have fun, escape from everyday worries and while away the time while waiting. Take part in exciting stickman duels.