Portal Kingdoms: Match-3 RPG is a puzzle game from the famous studio MYTONA. You have to form a team of five selected heroes to fight demons, monsters, dragons and other evil creatures. Connect pieces of three or more and launch epic combos to inflict maximum damage on the enemy and activate the super skills of the heroes. Summon new fighters through the portal and pump your wards to confront difficult opponents. Win numerous duels, earning epic armor, magic items and legendary treasures as rewards. Spend the accumulated wealth for the kingdom development. Build it up in every possible way, becoming the greatest ruler of all time. Also go on raids on bosses, which will be much more difficult to defeat, but the reward is worth it. This game combines excellent quality graphics with addictive gameplay, where you will find epic puzzles, storming dungeons and building a base for a fantasy empire. Also, download Family Hotel and Empire Warriors: Tower Defense.

Learn more about the game below. 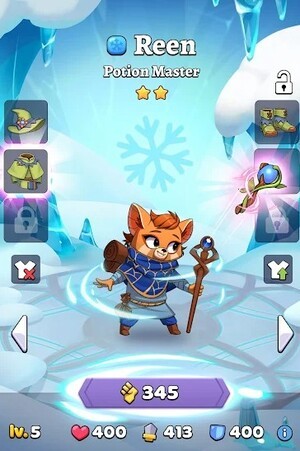 Players have to fight against enemies in Portal Kingdoms: Match-3 RPG. The playthrough of the battle itself seems to be a very simple task. As soon as you enter the level, a field will appear in front of you with a board, divided into cells located at the bottom of the screen. Each of the cells will contain an element of a certain color and your task is to connect them in a combination of three or more pieces. Your heroes will be located just below the game board. Each of them has its own elements, highlighted in a specific color. The elements on the game board will correspond to the same color.

Gather a collection of epic heroes

The project presents a wide variety of cards with heroes, each of which has its own unique characteristics and abilities. Use their powers wisely to defeat any opponent. Each of the heroes relates to some element. All elements have own colors, each of which corresponds to a pebble on the playing field. Collect colored elements to accumulate the hero’s mana and activate his special attack against your opponent.

You can pump each card with a character. To improve the hero, you need cards with weaker fighters, which you can get from buildings in the city that are responsible for hiring soldiers. Portal Kingdoms: Match-3 RPG features a wide variety of character cards and you can combine them with each other as soon as you want.

Build and upgrade your kingdom

In the possessions entrusted to you, you can build various structures responsible for the further development of your army. These buildings include training camps for fighters, a special portal for summoning heroes, as well as several buildings for extracting resources to feed and maintain your army. You also have access to special buildings in which you can produce magic spells and potions. Use such special items in the process of fighting an opponent to replenish your strength, revive the hero and so on. 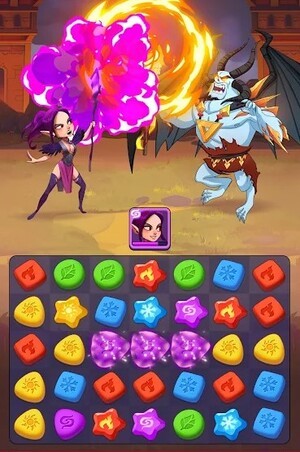 In addition to all of the above, you have to explore other territories in Portal Kingdoms: Match-3 RPG. The locations are extremely diverse and interesting. Fights can take place with epic, bosses that are much stronger than normal players are. The battle on the playing field takes place in waves, as they spread to everywhere. In general, the bosses are the most difficult enemies. They are powerful. You have to make every effort to defeat the enemy.

Portal Kingdoms: Match-3 RPG has a very beautiful and bright graphics, made in 3D and cartoon style. All locations and heroes are detailed. Since all events take place in the fantasy world, everything looks very atmospheric and beautiful.

Energy is an important aspect of Portal Kingdoms: Match-3 RPG. You will not be able to continue your adventures without it. You have to wait a long time to replenish it. To prevent this from happening, we suggest you download a mod for unlimited energy.

Portal Kingdoms: Match-3 RPG is an unusual combination of RPG, city-building strategy and match-3 puzzle. The gameplay resembles a form of original combination. There are hero cards at the top of the playing field and puzzle screen at the bottom. In addition, you will develop your own settlement, bringing the resources necessary for the passage. 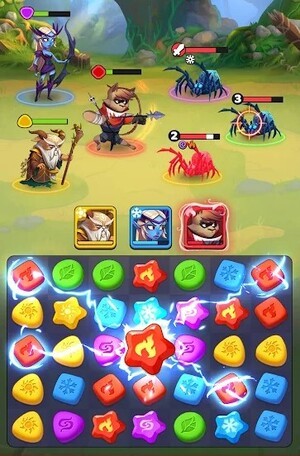 One of the most important moments of the gameplay is the base construction. It is necessary for extraction and storage of resources, creation of various items and recruitment of heroes. There are several types of buildings at the base. Be careful during constructing of buildings – you cannot demolish them. Therefore, think carefully in advance – what and where to build.

During the battle, do not try to destroy all opponents at once. Kill them gradually – this can save health and strength for your units. The alliance system and the hunt for titans deserve special attention in the game. Create alliances with real players to increase the power superiority, without which it will not be possible to defeat the opponent.

The game turned out to be unusual: the combination of several genres has made the gameplay so intense that it captures literally from the first seconds. Portal Kingdoms: Match-3 RPG will keep you engaged with quality graphics and addicting gameplay.