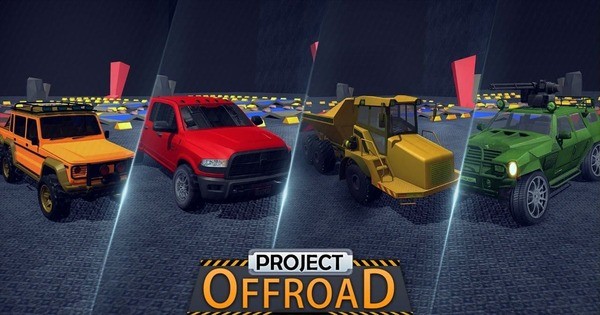 [PROJECT: OFFROAD] is a game about driving various vehicles on a large number of tracks specially created for players. This is not exactly your usual car racing, where you roll around the standard tracks in sports cars, overtaking boring bots one by one. This is a full-fledged cargo simulator where you carry out tasks on a large number of different vehicles on different, well-designed landscapes. Each mission is a whole test where you need to drive from one point to another, overcoming various obstacles, hills, slides, pits and jumps. For fans of cool car games, we recommend that you familiarize yourself with Rebel Racing and Racing in Car 2.

[PROJECT: OFFROAD] has a unique style and atmosphere, and the elaboration of levels and cars surprises you with its quality.

Developers of [PROJECT: OFFROAD] didn’t draw for you the standard and boring tracks that can be found in any car game. There are no usual bumpers, cones and poorly drawn cities with the same five-story buildings or poorly made private houses and skyscrapers. The developers approached the world around them simply, but with taste. A minimalistic grid or imitation of real places, but with detailed landscapes, giving scope for different options for completing missions. Many different objects that make your gameplay interesting are detailed and amaze with their appearance and physics. Each car has diligence painting and creates an abundance of pleasant emotions.

Physics as if transferred from the real world

The authors of [PROJECT: OFFROAD] have done a great job trying to convey interaction of cars with surfaces and objects. Enjoy the realistic behavior of trucks on missions, trying to overcome many different obstacles. Each task delights you, and the surprise of such a detailed gameplay won’t long. Specially modeled tracks and a variety of slopes and obstacles cannot only make it difficult for you to pass, slowing down the car. Your car can stuck and roll over, making it difficult for you to get through. Also, beware of collisions with bumpers and concrete blocks.

Many different and detailed vehicles

[PROJECT: OFFROAD] provides you with a large number of cars of different classes and weights at your disposal. There are many common 4×4 SUVs available to you, but this is just the tip of the iceberg. A large number of cars with six driving wheels, as well as with eight, complement the already large fleet of vehicles. In addition, all car models have good detailing. It often seems that developers visited all real car factories and with care transferred everything that they saw into virtual reality. You can improve and modernize absolutely all cars the way you want.

[PROJECT: OFFROAD] has nice minimalistic graphics, but at the same time, it does not slide down to the level of low-poly projects. Developers made all cars and game objects perfectly detailed with wonderfully matched colors. In total, the visual component of the game evokes only positive emotions. The interface in the menu isn’t overloaded with many useless items, leaving only the necessary settings and buttons. The sound component brings many good emotions. Music helps you to cope with difficult tasks on the tracks, and in-game sounds convey the real behavior of cars.

[PROJECT: OFFROAD] has a huge number of cars that you can improve as you want. In order to open and improve each car, you have to earn a lot of game currency, spending a large amount of time. However, we can give you the opportunity to discover all the game content at once by downloading unlimited money mod in [PROJECT: OFFROAD].

Our editors have tested the [PROJECT: OFFROAD] and unlimited money feature. We assure you that mod works perfectly. The game currency immediately appears in your account after the first launch of the game. Use money to tune your trucks, making them even more powerful. We also confirm that mod cannot cause harm to your gadget.

The gameplay in the game consists in completing various tests on trucks and off-road vehicles. On the right side of the screen, you have the gas and brake pedals and a reverse switch. There is a steering wheel on the left, with which you can control the direction of vehicle movement.

[PROJECT: OFFROAD] is an excellent off-road simulator that stands out from all other representatives of the genre.

How to Install [PROJECT: OFFROAD] Mod?

Don’t forget to delete the original version of [PROJECT: OFFROAD] before installing our modified version to prevent errors during installation process.