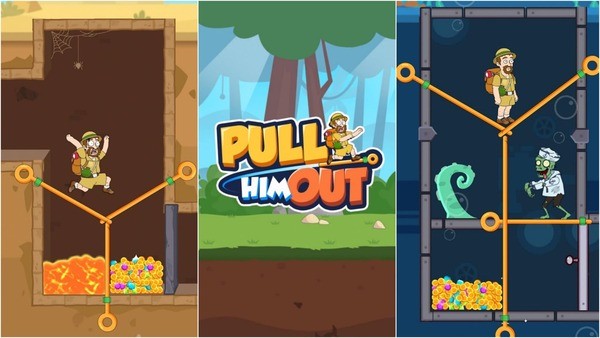 Pull Him Out – help a treasure hunter get to gold and diamonds without falling into traps. Our hero was lucky enough to find an ancient map, which indicates how to find treasures. However, his searches led to the fact that got in trap and he cannot quit it without your participation. All that is required of you is to pull out the partitions in the correct sequence. Only then, the hunter can safely pick up the hidden treasure without falling into the boiling lava, without meeting a mummy and other dangers. Together with the main character, go in search of valuables and artifacts, solving simple puzzles that are suitable for all ages. There are no time and life restrictions, so you can make as many attempts as you like until the goal is achieved. Download other puzzles – Be The Judge and Case Hunter.

Read the entire review to find out all the details about Pull Him Out.

Pull Him Out introduces a fearless adventurer who, by chance, finds a treasure map. This is a treasury in a lost Egyptian crypt. The story begins from the moment when your character gets inside the tomb and hears prayers. They reach him from a closed sarcophagus. Who knows who is yelling there? To do this, you need to unravel the main secret. Find attributes such as a ruby ​​and a royal rod.

The local puzzles are built in such a way that you will need to find the only correct algorithm of actions. Locations usually include some kind of danger that can lead to death of the hero. Such dangers include poisonous gases, pools of lava, robbers, ancient mummies, zombies, wild animals and so on. Use pins to either protect the main character from all of the above or cause something heavy to fall on the enemy’s head. Often times, you have to act more humanely. For example, an angry dog ​​can be distracted with a large piece of ham.

Many levels to explore

The game really does not give you time to get bored. The entire gameplay includes eleven chapters, each of which has a hundred levels. Each location has an original design, originality of the task and different goals. It is worth noting that when passing any game level, the player does not have any difficulties. Whatever the new task, players must always control the actions of character and pull the champion out of a variety of troubles. In addition, you must not forget about collecting jewelry.

If you believe the feedback from users, then the local levels can cause difficulties only for the youngest gamers. Such a low level of difficulty leads to the fact that players manage to complete all levels in almost one evening.

Use hints and bright skins

The rewards collected in the process of passing the level are of a formal nature, so in-game currency will be the most important reward for you. By the way, you can double the rewards if you agree to watch a short commercial. The only way to spend the accumulated currency here are hints. Yes, you have to pay for hints here. However, it is worth saying right away that the local difficulty level is not that high, so you can solve all the problems on your own.

A more interesting gameplay component of Pull Him Out is the skins for the main character. They open as you progress through the campaign. Among the skins, you can find images from various periods of history, which will be very suitable for adventurer.

Pull Him Out has hand-drawn graphics that are not of high quality. Nevertheless, the picture looks decent enough. There is almost no audio in the game, which is disappointing for some users.

If the player has difficulties at one of the levels in Pull Him Out, he can use the hint. However, the problem is that the user has a limited number of tips. To solve this problem, we propose to download our mod for unlimited amount of money. Such an approach makes it possible to use the hints at any time.

Pull Him Out has no plot background, but you can understand that main character is adventurer from short videos and locations presented here. It happened historically so that he is destined to get into various troubles constantly. There everything depends on his ingenuity. Moreover, the main character lives in a world in which you can meet huge pins in all places. You need to help the hero solve simple puzzles, which essence is to neutralize dangerous creatures and natural phenomena and receive a reward. Absolutely every local level offers you to choose the correct sequence for pulling the pins out of the structure.

Yes, the gameplay smells of some monotony, but various locations, sharp plot twists and much more contribute to the versatility. Meet various characters in the course of passage who will be grateful to main character for saving. There are many levels here, so the described game will keep you busy for several days. You can somehow interact here only with the pins that you need to pull out of the structures. You cannot do any more manipulations with either the hero or the environment.

Pull Him Out gives users freedom of choice. After all, the result depends on the decisions made by the player. The player’s moves will show whether it is positive or negative. Each time your character falls into dangerous traps, from which it is imperative to rescue him.